Police charged, but not convicted

No police officer has been convicted of the October 1 charges five years after the events. 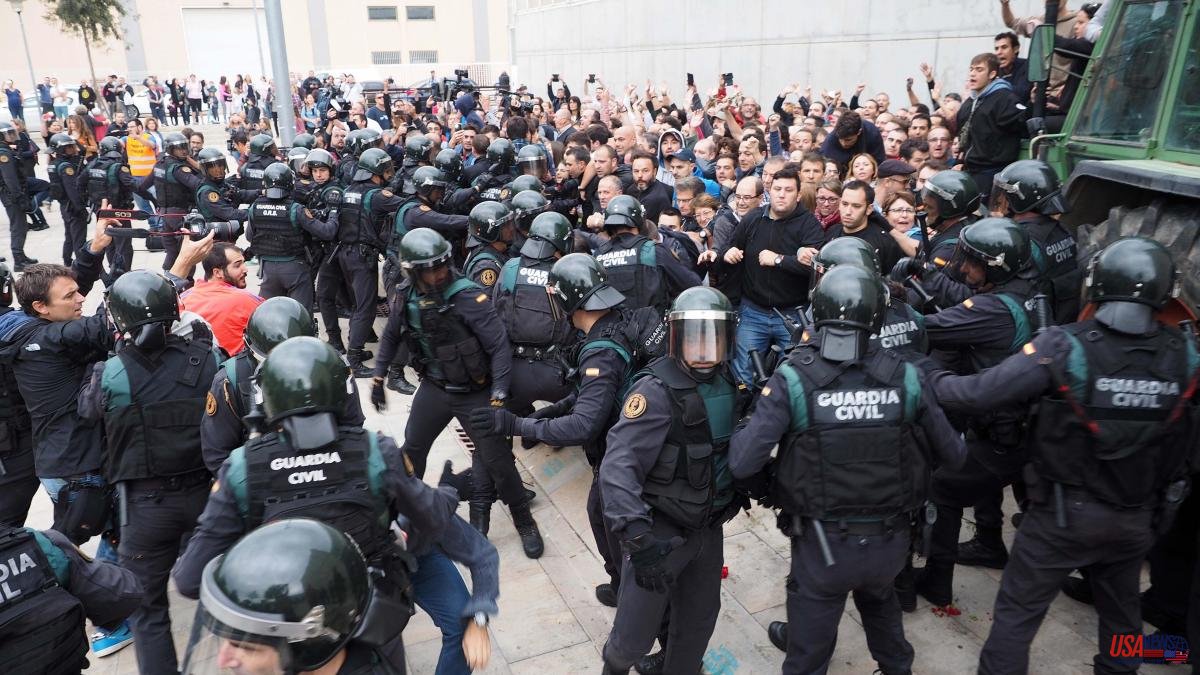 No police officer has been convicted of the October 1 charges five years after the events. There were five police officers who have already been tried and were acquitted and today 161 officers are waiting in various courts in Catalonia for the judge to decide whether to put them on the bench or file the case. These figures have been compiled by Òmnium, which is part of the popular accusation in the different cases.

The largest investigation opened by the charges is instructed by Court 7 of Barcelona, ​​which maintains 65 agents investigated for injuries to referendum voters. In that case, the big question is who ordered the loads. The former Secretary of State for Security, José Antonio Nieto, and the head of the device, Colonel Pérez de los Cobos, said that the agents had autonomy to intervene and that the order depended on each head of unit. The investigation has ended this year and is waiting for the judge to rule on which agents to send to trial. In this case, an expert report prepared at the request of the entities Irídia, Òmnium and the ANC recorded more than 450 disproportionate actions in schools in Barcelona alone. In addition, another report also revealed that there were two hierarchical superiors on the ground who authorized the shooting of rubber bullets.

The second largest cause is the one instructed by a Mataró court, which analyzes the excesses of 46 Civil Guard agents in the municipality of Dosrius. The former mayor and a former councilor are also charged in this process for disobedience and resistance to authority. In Girona, a case is still alive that investigates 28 agents of the National Police for their actions in the city's schools and in the municipalities of Aiguaviva and Sant Julià de Ramis where former president Carles Puigdemont was supposed to vote.

The dissemination of the cases by the courts also affects four agents in Manresa; one in Lleida; three in Tarragona; and fourteen in Sant Carles de la Rápita, a case that had been archived and is pending appeals.

On the other hand, in the case of the legal cases opened against the Mossos d'Esquadra for not acting to prevent the referendum, the passage of time has led to a change of perspective. While in 2017 the inaction of the Mossos d'Esquadra was virulently questioned, all the courts have endorsed this operation and have filed all the cases that remained open against Catalan police officers, according to data provided by the Department of the Interior. Of the 22 cases that were opened in 2017, all have been archived. The acquittal of the Mossos Major Josep Lluís Trapero paved the way for some cases. The resolution validated the Mossos strategy of collaborating with justice while preserving coexistence. Trapero's acquittal had a direct impact on two cases that affected the police leadership that designed the 1-O operation together with the Major. One, in Cornellà, where a judge charged the former chief commissioner of the Mossos during 155, Ferran López, and the rest of the commissioners with rebellion, sedition and disobedience, considering that they were responsible for the action guidelines of 1-O. And the second in Sabadell, in which the commissioner of the northern metropolitan region, Cristina Manresa, and the rest of the leadership were charged for alleged disobedience. Despite the fact that the judges appreciated signs of crime in his proceedings, they had no choice but to file them after Trapero's acquittal. "It would be absurd to continue with the cause," they argued. However, before the Mayor's, there were also other resolutions that were expressed in the same sense. In El Vendrell, where eleven agents were charged, the case was filed. In Mollet, the case against an inspector, a sub-inspector and a sergeant who had been accused of giving express orders not to remove the ballot boxes also ended in nothing.