Petro prepares for the presidency of Colombia amid death threats

Bulletproof shields have been the protagonists of the campaign for the Colombian elections this Sunday, which can bring the left to power for the first time in history, led by Gustavo Petro, the great favorite. 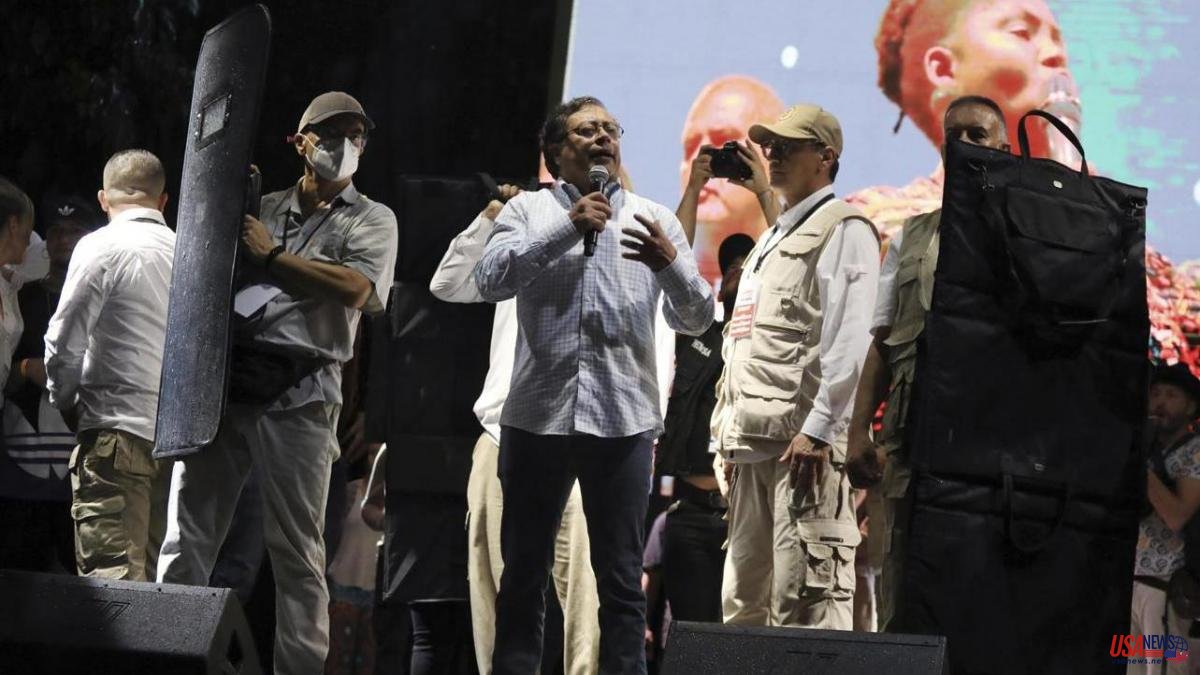 Bulletproof shields have been the protagonists of the campaign for the Colombian elections this Sunday, which can bring the left to power for the first time in history, led by Gustavo Petro, the great favorite. Two burly escorts have stood on either side of Petro at all his rallies with full-body shields, ready to throw them at the candidate at the slightest threat.

The bodyguards have also been in the first row of the stage in the acts of Francia Márquez, Petro's vice-presidential candidate, who last Saturday experienced a critical incident when at a rally in Bogotá the escorts had to cover her with the shields and make her come down from the stage by the green laser that was pointed at her from a building. He was not a sniper, but an 18-year-old who appeared before the police hours later and apologized for his action.

In early May, Petro suspended a trip to the coffee growing region - the coffee-producing region - alleging that his security team had received "first-hand information" that the paramilitary "criminal group La Cordillera was planning to attack" him. Dedicated to extortion, contract killings and drug trafficking, La Cordillera is just one of the hundreds of gangs that survive in Colombia, including paramilitaries, ELN guerrilla groups, FARC dissidents and organized crime. Many of these groups exercise strong territorial control, as demonstrated by the narco-paramilitaries of the Clan del Golfo, which a few days ago called an "armed strike" that paralyzed 77 municipalities in nine regions, as a reaction to the recent extradition to the United States of its leader. , Dairo Antonio Úsuga David, alias Otoniel.

“The threats to the life and safety of the candidates are real. In Colombia the criminal structures have not been dismantled. The ability to mix violence with politics has not been dismantled,” Silvia Otero, a professor at the Universidad del Rosario, tells La Vanguardia from Bogotá. “That is why there is a hundred percent possibility that, given the many radical armed groups that exist in Colombian society, one of them has the capacity to attempt against the life of any candidate,” adds this political scientist.

However, the main paradox of these elections is that, despite the fact that political violence continues –139 murders of social leaders in 2021–, a leftist is about to reach the House of Nariño because the war between the State and the FARC ended in 2016.

At 62 years old, Petro, a senator, economist, former guerrilla and former mayor of Bogotá, is running for the presidency for the third time. In 2010 he was fourth and four years ago he went to the second round, but lost to the current president, the conservative Iván Duque, former president Álvaro Uribe's dolphin.

Leader of the Colombia Humana party, Petro is at the head of the Historic Pact coalition. Among the six presidential candidates who are still in the running, all the polls give him victory in the first round, with an average vote intention of around 40%, so to be president he would have to win the second round on June 19 against one of the two candidates vying for second place: the 47-year-old right-wing former mayor of Medellín, Federico Gutiérrez (close to 25%), from Equipo por Colombia; and the populist and former mayor of Bucaramanga, Rodolfo Hernández (around 20%).

At the head of the League of Anticorruption Leaders, Hernández has become the phenomenon of these elections. A 77-year-old millionaire builder, his ideology is an enigma and he bases his speech on the fight against corruption and the anti-establishment. A few days ago, the environmentalist Íngrid Betancourt, who did not reach 1%, withdrew her presidential candidacy and went on to support Hernández. The emergence of this populist has contributed to further deflation of the centrist Sergio Fajardo -third in 2018-, who is already fourth in the polls.

“Petro came from the very leftist spectrum in the 2018 elections, but he has been nuanced and veered towards the center-left,” says the director of the Externado University School of Government and Public Policy, Paola Montilla, from Bogotá, who assures that all the candidates present themselves as centrists. “Everyone, including Gutiérrez and Hernández, have wanted to win the center and the one who could have best won it was Fajardo, but he made serious mistakes,” adds the political scientist.

Petro spent a year and a half in jail as a member of the M-19, a guerrilla group that, after the 1989 peace accords, went into politics but its leader and presidential candidate, Carlos Pizarro, was unable to run in the 1990 elections because he was assassinated by gunmen while traveling on a plane. Colombia has a tragic tradition of crimes against presidential candidates, so Petro's warnings are plausible.

In the final stretch of the campaign, the left has also denounced the risk of manipulation of the results – after the disappearance of almost 400,000 votes for the Historical Pact in the March legislative elections, which were ultimately awarded to it – or even of a coup d'état to suspend the elections, which forced President Duque to reassure the population: "There is no basis for all that number of rumors that some of the candidates were spreading last week saying that the vote was going to be suspended."