Peter Seewald: “Ratzinger was modest; he was never a 'Panzerkardinal'" 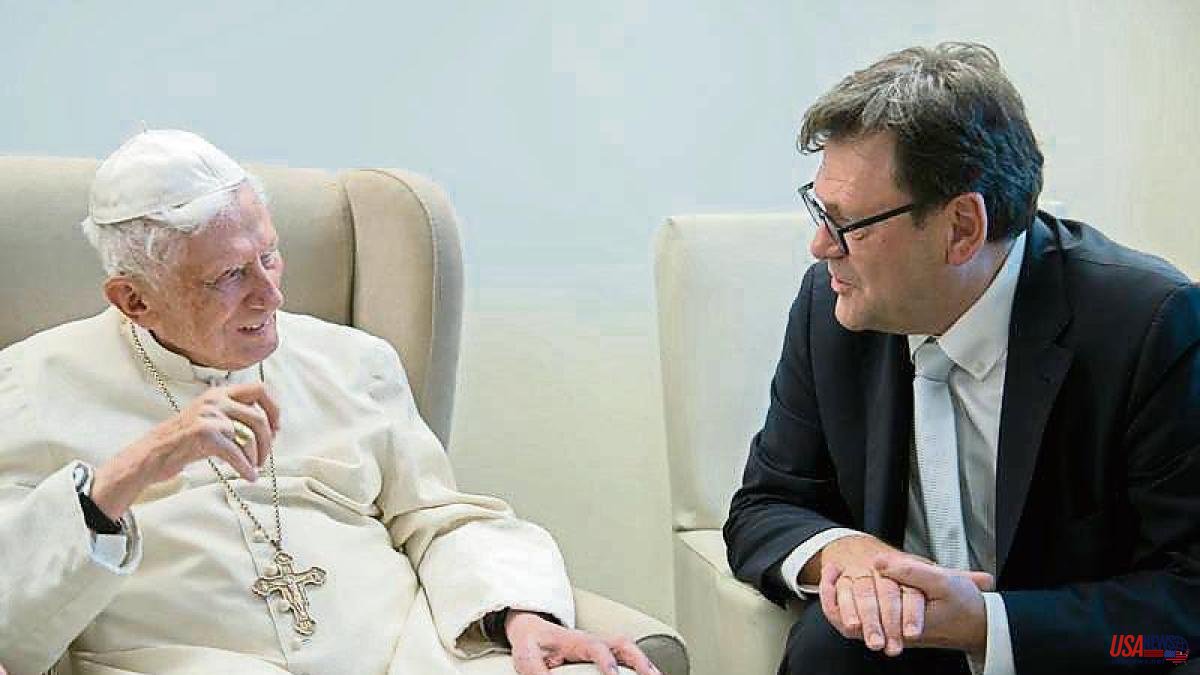 German journalist Peter Seewald, author of the biography Benedict XVI. A Life, published in 2020, maintained direct contact with Joseph Ratzinger for this and four previous interview-books –two of them being this cardinal– for thirty years. Seewald, 68, a renowned religious-themed author, shares from Munich – where he lives – his memories and reflections on the late pope emeritus.

What has caught your attention the most about the spiritual testament of Benedict XVI?

I have been moved that he thanks his parents for giving him life and for being an example to him, especially in faith, but also in critical thinking. However, I hoped he would update that letter, which he wrote in 2006. At least that's what he told me he would. Obviously it didn't happen. I miss a stronger reference to the plight of the Catholic Church in the increasingly atheistic and anti-Christian societies of Western Europe.

What personal memories do you have of Joseph Ratzinger?

When we met in 1992, I was surprised to find in the then cardinal a person who had nothing to do with a prince of the Church. He was never a Panzerkardinal, as some called him. Everything about him was modest, unpretentious, accessible; a man without vanity, something not easy to find in clergymen. I had left the Church, but I was impressed by the way in which Ratzinger spoke of love, how he demonstrated that religion and science, faith and reason, are not opposites. I liked his humor, his composure, the willingness to suffer with which he endured the worst slanders. In our last meeting, the pain that he carried on his shoulders was noticeable, the deep sadness for what was happening in the world, the war in Europe and the crisis of the Church, especially in his homeland.

These days obituaries praise his revolutionary resignation from the papacy. Will this resignation remain as the great vindication of Joseph Ratzinger for history?

That is an understatement. Many obituaries do not include his work in all its magnitude. Without Joseph Ratzinger, the Second Vatican Council would not have been as we know it. Nor would there have been a Theology back to the roots. Not even John Paul II would have had his help for decades in the face of the fierce attacks against Catholic foundations. His resignation modernized and changed the papacy forever. But much more significant than his retirement is his legacy as a doctor of the modern Church. In fact, he wanted to be a teacher, and as a keeper of the faith and pontiff he became a beacon of Catholicism, an icon of orthodoxy to which one can turn in these bewildered times. I am happy to agree on this with Pope Francis, who has already called his predecessor a "saint" and says that the magisterium of Benedict XVI "will appear ever greater and more powerful from generation to generation."

How do you define Germany's relationship with the first German pope in centuries?

Contrary to public representation, Benedict XVI had with the millions of copies of his works a large following not only internationally but also in Germany. Almost all of his books have made it to the bestseller list. However, the relationship of a large part of the German episcopate with the first German pope in half a millennium has been fissured. Also because he insistently warned the bishops not to depend so much on a lot of money and on the Church as an institution, but rather on missionary work. Ratzinger was always uncomfortable, unfortunately also a voice in the desert. Right now we see efforts to convert the Catholic Church in Germany into a second Protestant Church.

The year 2022 was complex due to the allegations that he knew of the cases of sexual abuse in the archdiocese of Munich and Freising when he was the archbishop.

The instrumentalization of sexual abuse is scandalous. As a cardinal, Ratzinger set the course for the prosecution of abuses. His public denunciation of the dirt in the Church in the meditations on the Stations of the Cross in the Colosseum in 2005 is unforgettable. Benedict admitted errors and omissions, but he was the first Pope to break the mantle of covering up sexual abuse. The so-called Munich expert report, which points to him in only one case, is the work of not very high-profile lawyers. It does not contain a single piece of evidence that Ratzinger was involved in that case when he was Archbishop of Munich. By the way, the victim of abuse, who is currently undergoing a compensation process, was not even born in Ratzinger's time in Munich.

Does the disappearance of Benedict XVI increase the pressure on Pope Francis, 86, to resign soon?

It certainly would have seemed strange if, suddenly, there were two emeritus popes strolling through the Vatican gardens. But, knowing Pope Francis, he won't let anyone tell him when it's time to vacate the see of Peter. According to canon law, he must make that decision freely, without any external pressure. Otherwise, it would not be valid.