Pere Aragonès: "Cooking on a Sunday is my moment of calm" 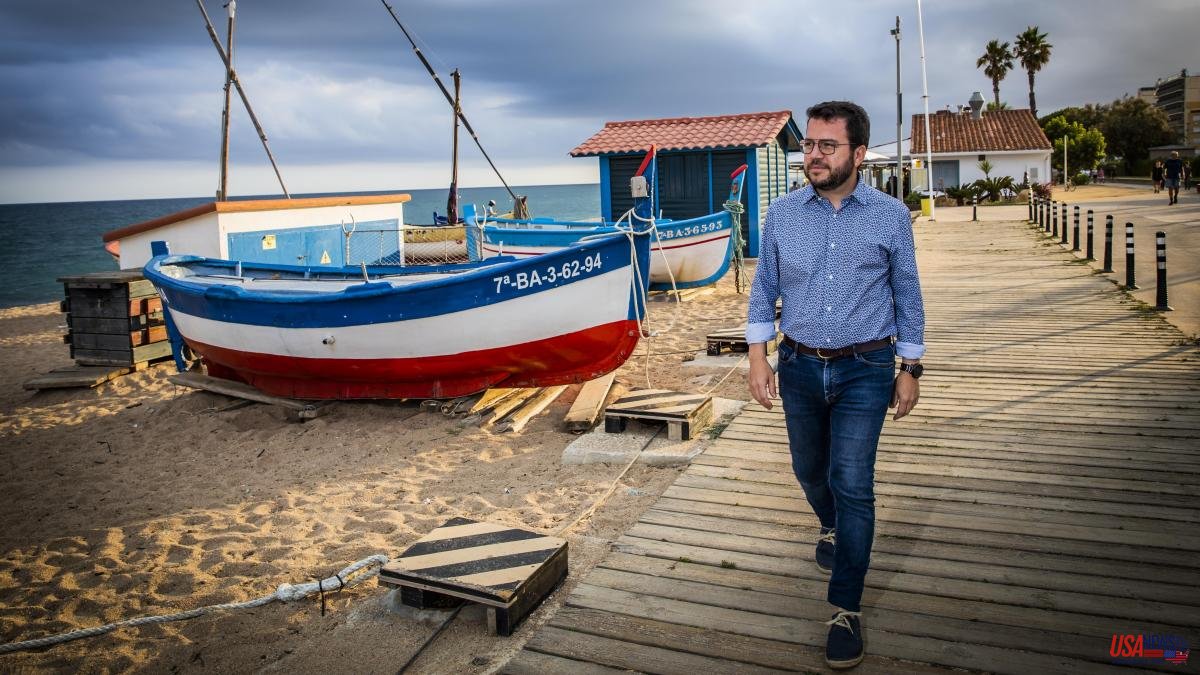 Pere Aragonès (Pineda de Mar, 1982) meets us in Plaça De les Mèlies, the central space in Pineda. As a child he went to a nearby school, and the patio was the square, with a dirt floor. There is also the old library, which he used to frequent, and on the other side the little horses, with the flying chairs that he liked and which his daughter now climbs on. We talk about politics and his love of cooking, and he chooses to take his picture on the beach.

It relaxes me. One of the most beautiful memories I have as a child is going into my grandmother Maria Teresa's kitchen and picking up the pan to see what she was doing. And the first thing I prepared and a little more elaborate were my grandmother's dishes, first unsuccessful, then better, and finally innovating.

What dishes did you learn?

My grandmother used to make mostly rice casserole. She was born in Palamós and in the 30's she went to Calella. My great-grandfather was a worker in a textile company and my great-grandmother was a cook in the houses of "lords of Calella", she had a hand in cooking and my grandmother inherited it. The rice in the Empordà casserole is one of those that I learned, but I am trying new recipes.

It's those things that you do and then they don't last long: I bought an esterification kit and managed to do it with a escudella, but in the end the escudella was better as it was. Then there is the low-temperature kitchen, long cooking times... the family already knows that for a birthday or for a saint's day, a kitchen gadget is a successful gift.

It is my moment of calm, a Sunday morning, three hours, four, quietly, at home.

There are always pending things that go around your head, right?

With my responsibility there are always pending things, messages that arrive and as long as the sofrito doesn't burn you see if you have to answer or not. And with a three-year-old girl, disconnecting is impossible.

Are you in the kitchen too?

Yes, he likes it, he has a little ladder to climb up and help me. The Friday pizzas that I'm at home we make together.

The kitchen usually requires patience, which is not granted to politics. Can you work if people ask for immediate results?

Good politics needs patience. People want immediate results but some are very short-lived and major transformations take time. I am inspired by Gramsci and the concept of cultural hegemony, which must be achieved in order to have political hegemony. In a certain way, this is what the leftist independence movement has done in Catalonia. You need cultural hegemony and then come the political victories. The transformations, the construction of solid majorities, also for independence, need time.

Exercising leadership is more complex than it was a few years ago, there is more pressure, quicker handovers, everything is more volatile.

We are more connected than ever, there are more possibilities of surveillance, in a good way, of accountability, surveillance of the citizen, and in a bad way, of espionage; They have been able to spy on me because there are cell phones. It is true that we are subject to continuous scrutiny, but also that there are controversies in the networks that are ephemeral. I distance myself from social networks.

This pressure means that in the end politicians do not dare to move from what is expected of them.

Probably one of the virtues is that you always think more or less the same.

That is if circumstances do not change.

Exactly, in that case you have to change. Joan Fuster used to say that “the first thing your enemies will deny you is to change your mind”. It can be changed, but there are values ​​and political positions that are important to continue.

Public opinion does not generally have a formed critical sense, it often goes in fits and starts.

We are exposed to a lot of information, and that often means that the stories end up being more important than the facts, but in the end the facts are very stubborn. Then how each one interprets them is another thing. We have to learn to discriminate against all this bombardment of information and the best demonstration is that sometimes the controversies, the public debates, are absolutely ephemeral. The important thing is the lines of continuity that exist and that what you defend can be sustainable over time.

What is the most important thing you have learned from politics?

What is a collective work? It is important to work as a team and that you make the key decisions with the conviction that they are honest, that you are not only guided by a sense of political opportunity. Sometimes it is better to sacrifice the benefits of the opportunity of the moment if you have to give up convictions and ethical questions.

It is more complicated in a coalition in which you share electorate; you are partner and adversary.

Yes, but when you find yourself in this situation you have to go back to basics, why are we politically involved? I think, when I got involved at the age of 16, I wanted to participate in politics so that my country would be better, independent, socially just. Do the decisions you make help to advance in this sense? If they help, it's worth it. If you are clear about where you are going, it is easier to make decisions because it is easier to rationalize, if there is an area in which, for whatever reason, you do not have a fixed position, you do not know the direction you want to have and you will end up kidnapped by the agenda of others .

Will you go on vacation?

Yes, I have promised at home.

My daughter wants a beach and we will go to the beach. We will make some excursion, some visit and also rest. In any case, I can't go very far, I have to be able to be back the same day if necessary.

Will you have time to read?

It's one of the things I miss the most. Not only because of a problem of available time, which is not much, but because it costs a lot to be able to make the cut as in other moments of my life I could do. I try to scratch time if the reading starts to catch me. Circumstances have made me a demanding reader.