Off-road writer with books of poems, novels, and essays, literary critic and journalist, Pere Antoni Pons (Campanet, Mallorca, 1980) conceives literature as a whole in which life is portrayed. 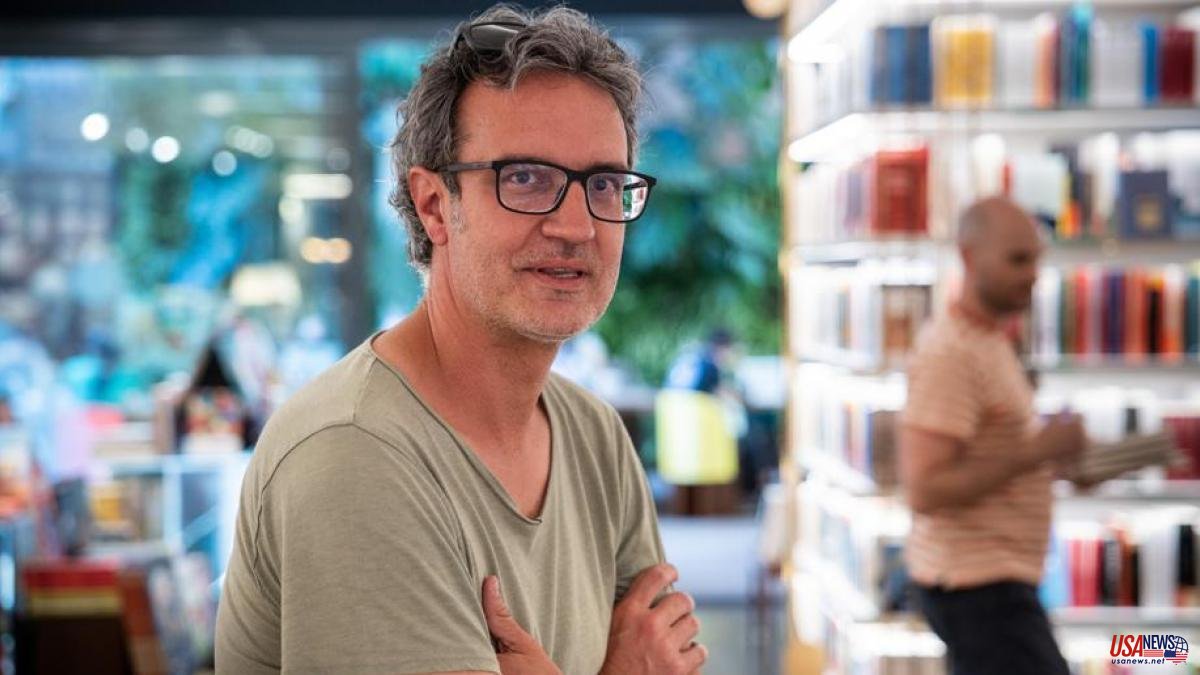 Off-road writer with books of poems, novels, and essays, literary critic and journalist, Pere Antoni Pons (Campanet, Mallorca, 1980) conceives literature as a whole in which life is portrayed. In Dilema d'energies (EnSiola), this beats day by day with a self that stands in front of the mirror and looks at itself and sometimes likes it, but others also revolts against the world. It is a book divided into different forms and parts with poems in verse, prose, songs, a long poem and a kind of "counterpoetic" in which the shadow of Leonard Cohen filters, as a reflection and objective at the same time.

The book begins with a self-portrait als quaranta anys. Are you trying to make peace with the past?

No, it is a book about wanting to put everything that is part of your own life and how you see the world, and it is full of tense, contradictory, beautiful, ugly, reassuring, unsettling things that bury you and at the same time elevate you. .. The book answers a double question: to what extent can a text withstand the tension of heterogeneity, of formal diversity, and therefore here are poems in verse, in prose, songs, sensual, abstract, more intellectual poems , short or long, and what correspondence does it have with another non-literary question: to what extent can a man bear the tension of his contradictions. Life is not a straight line, not even a winding road, but multiple paths that intersect, diversions, directions that go back, forward... I had the will to literaturize that, contradictory desires, incompatible wills, desires that cancel each other out mutually while complementing each other and fattening each other. He wanted to do a book that was very vital and at the same time very desperate, or very intense in a way that was distressing but also very energetic. There's a lot of angst here, but full of vitality and energy, because that's how I feel, although it's not entirely autobiographical, of course. It is in the same way that painters take self-portraits, they are not photos but variations of what they are or what they can be or what they look like.

Things that may or may not happen to you. And to anyone.

Exactly, or that later you formalize them in a certain way, which is not a literal transposition of your own life, but there is this intimate tension, of internal energy that breaks you but at the same time elevates you and fills you with meaning, and wanted to turn it into poems.

See yourself reflected in the mirror.

Yes, I thought writing it. When you are twenty years old and you feel vulnerable, you need to assert yourself, and the way to do it is with poems that are very vital, exalted, purposeful. On the other hand, when you are forty years old and you are already strong, because life has hardened you, you can allow yourself the luxury of self-criticism, of self-derision, of treating yourself ruthlessly. I think this is a book full of self-esteem but also full of self-hatred, full of arrogance but full of self-hatred, because people are that, we are wonderful but also grotesque and ridiculous, or I feel like this: at times I feel full, but at times I feel absolutely vulgar and ridiculous, and I already feel strong enough to literaturize it without much obsession. The Self-Portrait als quaranta was a bit of that, the desire to make an inventory nel mezzo del cammin, to put it topically, which is not Dante's 35 years but past forty. For example, one thing that I didn't have in my poetry before, and now I do, quite a bit, is sarcasm, humor.

As in the Poem of the Beatitudes ...

Yes, a certain dissolving sense of humor that I didn't have when I was young, and I like it. A will also to combine the epic and grandiloquent with the sarcastic and ironic, because that's what life is.

There is an evolution, then.

I went ten years without writing poetry. I made three books between the ages of 19 and 27 and then it hit me like a crisis, not only creative, but I considered that the vast majority of poems that were made were very easy and many poets made pure gratuitous rhetoric and I became disenchanted with the genre and I wanted to be a writer beyond just being a poet and I started doing a lot of journalism, which drains your energy, novels... And after a while I caught the fever and I went back to writing poems. Miguel Ángel Llauger said something that seemed very interesting to me, and that "it seemed that this guy never had to write poetry again, and when he returned he had two options: that poetry be a kind of intimate redoubt, of verbal purity in which everything is distilled, culminating a work, or a type of poetry in which it incorporates all the baggage it has accumulated in recent years”. My poems now are just that, they are not a distillate but they multiply, they take, they eat everything.

Yes, before we talked about intimate tensions and personal contradictions and formal heterogeneity, but it is also thematic, there are politics, sentimental issues, a kind of celebration of domestic life, and a kind of will to flee from domestic life, a lullaby, moments when you shit on Catalonia and Spain and all of humanity... Because I'm really interested in everything, from a painting by Miquel Barceló to Catalan, Spanish and Majorcan politics, and I wanted it to be there and I think it is in a natural way.

Not much, no. From a moment I saw that there was this double question and I said to myself: “Now we will play to make it heterogeneous and diverse and contradictory”, but it came out on its own. I would already get a song, then a prose poem, and then I would try to balance it and maybe I would end up with a verse poem...

Let it not be clipped prose...

Yes, it is free verse, often. Those who want meter and rhyme, perfect, but to make a poem what you need, the fundamental thing, is tone and rhythm. If you have that, you already have the poem, beyond what you say, which is also important, of course. It is something that is sometimes forgotten and we think that free verse does not need anything; on the contrary, he is the one who needs it most, because he has nothing else.

Exactly, in Ferrater you see a lot, although he was sometimes very strict, too, in the meter, doing it his way and giving it this conversational tone. Here there are moments in which a tone is adopted that makes it seem that the poem speaks to a thousand people, others in which it speaks to a single person, or to no one, or to oneself, poems that shout, or speak confidentially... all that too it is the diversity and variety that I wanted there to be, because sometimes we yell, or insult, praise.

It is also a very vital book.

Because even the shadows themselves are part of the vitality. Without sounding like a self-help book, but the mistakes, failures, disappointments, grudges, the desires that have rotted, the frustrations... you accumulate all that but it is also life. Being able to resignify it energetically and literarily is one of the advantages of writing. Writing allows everything to make sense.

At what point does poetry differ from other genres?

Well, the difference but not much. There are verses in this book that could perfectly be sentences from an opinion piece, and I like to mix it up. There are scenes that could come out in a novel, just as in a narrative from time to time I allow myself lyrical outbursts that seem like they should come out in a book of poems. Each gender is as it is, but at the same time they are all impure, they all have transfers between them. Poetry cannot be something sacred, that speaks only about certain topics, using certain words. On the contrary, you have to try to avoid the most topically poetic words, because they are already dead.

You should not fall into an empty style.

If you really like a poet you have to try not to be an epigone or copy him too much, but Ferrater's idea of ​​making poems like someone chatting with a friend in a bar or like someone writing a business letter, exaggerating it completely, using the language of every day but elevating it, charging it with emotional and intellectual tension, is a fundamental poetic lesson. Does that mean that I don't like Riba? No, Riba drives me crazy, and Foix! And I've also learned things from them. But as a poet I feel comfortable with that and I have to be consistent, and I like that.

Where does Leonard Cohen come in here?

He is a man who has all these kinds of assumed contradictions of impossible polymorphism.

He is one of the most diverse singer-songwriters...

Of the singer-songwriters and of humanity. He is a guy who has been a junkie, a womanizer, faithful, Buddhist, hyper-intellectual, unbridledly carnal... he is a man who was in everything, and his music and his songs as well. Of course I've been listening to him for more than 24 years in an absolutely obsessive way, he seems to me an exceptional poet and an unbeatable singer-songwriter. I think they should have given the Nobel Prize to him, and not to Dylan, or ex aequo to both, even, and everyone is happy. There are lyrics by Leonard Cohen that are some of the best poems of the 20th century.

If we made a list we would find more than fifty wonderful! No one has explained love triangles better than him. In his lyrics you find from the most spiritual and mystical idea to the most earthly and vulgar thing.

Or the album The Future, which I'm now listening to a lot together with Lou Reed's New York in parallel, which are like the same political thing but one as mystical apocalyptic and the other as dirty realism. In the end, poetry is everywhere. What do you do, are you only influenced by poets? No, you incorporate it all. Picasso looked at the whole world and everything was capable of being turned into painting. Or filmmakers, or novelists. Novels, like poems, are made with everything in the world, because they are the world. I don't think literature is something apart from life, it is life formalized, converted into words, but it is life, and I want my literature to have the dirty beat of life. It's an obsession of mine, I even prefer it not to be so neat and clean but to have this dirty energy. In this book of poems I think that is, because what was beating inside my head I have put on the page.