The Spanish Pedro 'Tiburón' Acosta (Kalex) won the Italian Grand Prix at the Mugello circuit and became the youngest driver in history to do so in the intermediate category, unseating fellow Spaniard Marc Márquez. 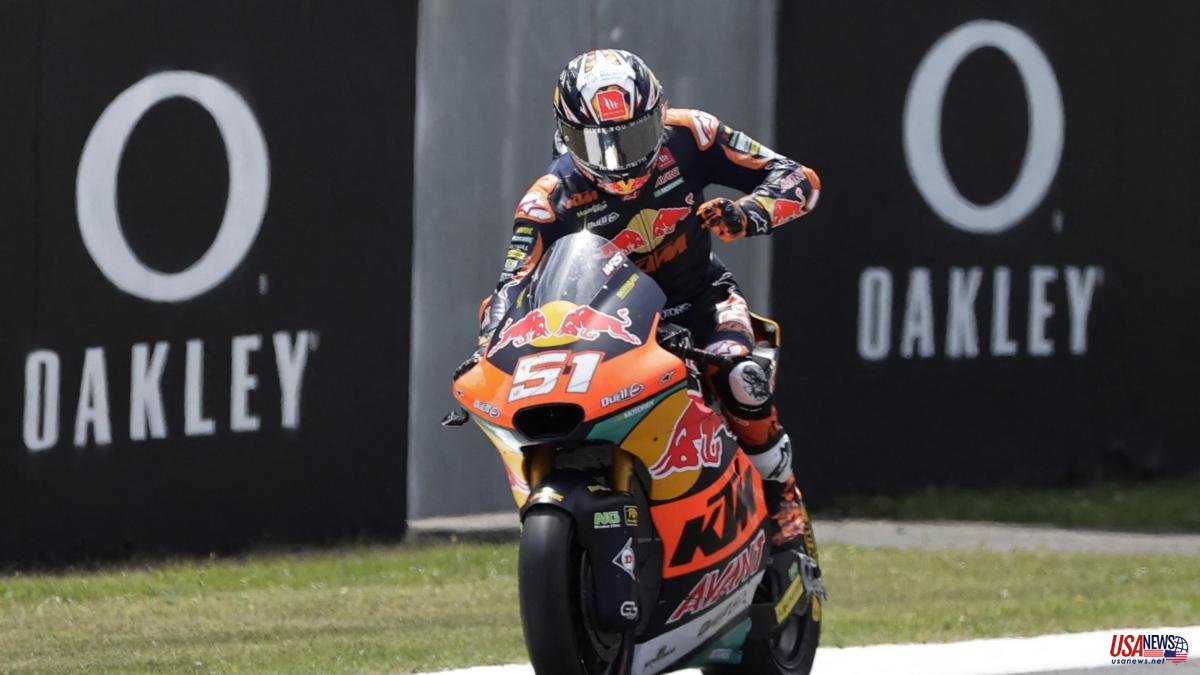 The Spanish Pedro 'Tiburón' Acosta (Kalex) won the Italian Grand Prix at the Mugello circuit and became the youngest driver in history to do so in the intermediate category, unseating fellow Spaniard Marc Márquez. Acosta, at the age of 18 years and four days, unseats Marc Márquez in that special classification, who had set the record in France in 2011, when he won the race at Le Mans at the age of 18 years and 87 days.

Celestino Vietti, who was unable to score points after suffering a fall, remains the leader of the provisional world championship tied on 108 points with the Japanese Ogura and with Arón Canet (Kalex), who did not finish the race either when he fell when he was second, third with 89 points.

Pedro Acosta ascends from the seventeenth position in which he arrived in Italy to the tenth. But before that, Arón Canet (Kalex) had not failed at the time of the start, although Acosta, who started second, got into the interior to speed up the braking at the end of the straight and negotiate it in first position, knowing that his The best option to aspire to the first victory in the category was to set the pace at the head of it.

Canet was also unable or unwilling to avoid the initial attack by Briton Sam Lowes (Kalex), who overtook him during the first lap, with Acosta closing in first position, chased by Lowes, Canet, Italian Tony Arbolino (Kalex) and the American Joe Roberts (Kalex).

A little further back, the Italian Celestino Vietti (Kalex), world leader and fourth in practice, had lost several positions and completed that first lap ninth, behind Ai Ogura, Mattia Pasini and Jorge Navarro, all of them on Kalex paths.

With fast laps by Acosta and Canet in the second lap, and with a few meters of advantage, a group of five or six riders began to define behind them, including Lowes, Arbolino, Roberts, Ogura, Pasini and Navarro. , with Vietti already a little further behind.

Arón Canet and Pedro Acosta "reviewed" each other on a couple of occasions, with the Valencian leader in the third lap and the Murcian then in the fourth, but without being able to get away from the rest of the pursuers.

Soon the leading group began to lose units, the first of them the Thai Somkiat Chantra (Kalex), who was fourteenth, while Pedro Acosta remained firm at the head of the test and a group of six pilots who had managed to distance himself a few meters from the rest and made up of Acosta himself, Canet, Lowes, Arbolino, Roberts and Ogura, with Vietti taking the lead in the chasing group, made up of eight other riders, with the Spaniards Jorge Navarro, Alonso López (Boscoscuro) and Fermín Aldeguer ( Boscocuro), among them.

A little further back, another group led by the Spanish Albert Arenas (Kalex), and also with Augusto Fernández (Kalex), who did not have enough pace to think about linking up with those in front.

Acosta remained firm at the front of the race, with Canet glued to him like a "limpet" and Arbolino, Lowes, Ogura and Roberts trying not to lose the rhythm of the duo. Marcos Ramírez (MV Agusta) was the next protagonist of a mishap, crashing on the eleventh lap and not being able to continue in the race even though he was far behind in the standings.

Pedro Acosta's pull made him and Arón Canet achieve a certain advantage over their rivals and at times gave the impression that the Valencian was studying the weak points of the Murcian and both were already more than a second ahead of a quartet that with the Vietti's arrival turned into a quintet, in which Ai Ogura decided to pass Tony Arbolino, seeing that the leading duo was slowly escaping.

But luck was not on his side with Arón Canet, who crashed on the entry curve to the finish straight during the thirteenth lap and left Pedro Acosta alone in front of the race, already with more than a second and half advantage over them.

Sam Lowes was the next "scapegoat" when he was involved in a "scuffle" with his own teammate, the Italian Tony Arbolino, who was throwing him to the outside of turn two of the circuit until the British could not avoid the fall, in an action that seemed intentional and was sanctioned by Race Direction with a long lap penalty.

On that same lap, the nineteenth, two from the end, the engine of Celestino Vietti's Kalex said enough was enough and the world leader was forced to retire.

Pedro Acosta did not fail, he rode with the precision of a Swiss watch en route to his first victory in Moto2, ahead of Joe Roberts and Ai Ogura, with Tony Arbolino fourth and Augusto Fernández (Kalex) in fifth position, while Alonso López He finished in eighth place, with Albert Arenas tenth, Jorge Navarro twelfth, Fermín Aldeguer fourteenth, Jeremy Alcoba seventeenth and Manuel "Manugas" González (Kalex), twentieth.