Palahniuk: “I know fans who get a huge face of mine tattooed on their chest”

A weekend with Chuck Palahniuk in Magaluf. 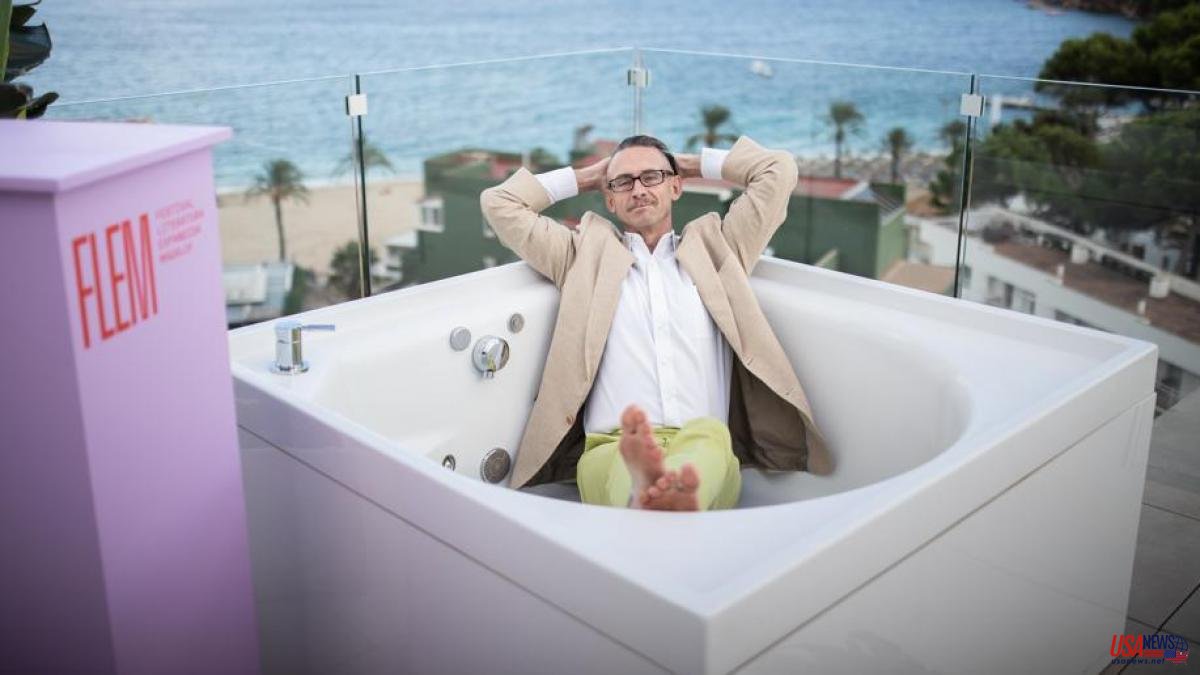 A weekend with Chuck Palahniuk in Magaluf. How does the plan sound to you? It seems to be attractive for the young people who yesterday came in large groups to this Majorcan town, famous for its balconies and other holiday hooligan things, and which is now claiming to be a cultural tourism destination with the second edition of the Magaluf Expanded Literature Festival ( FLEM), which has a good cast of authors –both international and local–, as well as a careful program of debates, musical performances and recitals. We entered Palahniuk's suite (Pasco, 1962), which has a jacuzzi on the terrace, and we asked him about his new book, Plantéate este (Random House), a mix between a literary manual and an autobiography as a writer, where he tells things about his family , of their tours or details of the making of of Fight Club .

Have you heard of Magaluf in Portland?

It seems like an ideal setting for his books: he is famous for the rampages of young people on vacation, who sometimes throw themselves off balconies into swimming pools.

Oh yeah? That tells me? I am very interested! Right here? Wow, wow... There are so many things like this! Every time I make a book, I sign an insurance policy in case those mentioned sue me.

Is that suit you're wearing today in the book?

Yes, it is one of those that I use only for promotions. It has to do with style, my image should not attract attention, I should be flat and professional. That way, people will see me as someone safe to trust with their stories. As a child and young man I wanted to be a priest... so that people would confess to me. This is my priest look.

Magicians never explain their tricks. Aren't you afraid that your readers will learn to write as well as you, thanks to your advice?

If you always use the same tricks, eventually you get bored. This book forces me to discover new tricks and techniques. They are not my tricks either, they were taught to me by others, like Tom Spanbauer.

How did you get to your workshop?

First I went to another, one for wealthy people, especially there were very educated and refined women, who dressed very elegantly. I wrote my things and scared them, they were distressed. Until one day the teacher pulled me aside and said, 'I'm sorry, Chuck, but you don't fit in. And she recommended me to go to Spanbauer's.

Does he have the tattoos that appear in the book?

I have none. These are the work of an artist, who has made them especially for the book, there are people who have already put them on, they are literary advice given by masters. Do you want to see the tattoos that a fan of mine has? Look...

A huge image of my face has been carved into my chest, along with these three other, smaller ones, who are cable television actors. I know several who have done things like this.

You say that if you want to earn money, you better not become a writer.

Tom always said: don't write to get anything. Whatever: get rich, make your parents proud... You should only write if it's what you deeply want to do.

The poor man was signing his thousands of followers in a public act and his hands bled, calloused, from the enormous effort. He asked for some bandages, but when a few drops of blood fell on one person's book, they all demanded the same thing, blood from his idol! He signed a lot of copies in blood. In the end the bodyguards took him away, very weak. I wanted to show a bigger picture of what it means to be a writer.

Like when a reader arrives with his attributes in the air and asks him to sign his penis. He remembers?

It is impossible to forget it. Or Margaret Thatcher.

I went to London 20 or 25 years ago. At Waterstones Bookstore a very handsome man came up to me and said, 'I love it when they put stuff in their food in Fight Club because I did it. "Tell me who you did it to and what you put on it or I won't sign the book for you." The boy, who worked in a five-star restaurant, very discreetly put up his hand as a screen and whispered to me: 'Margaret Thatcher has swallowed my sperm five times'.

I read to him: “In life you cannot have these three things at the same time: a great lover, a great apartment and a great job”.

That's a line from Sex and the City. And I absolutely agree. One is already a lot. If you manage to have two that are very good, the third will seem like little to you, all three never work fully.

He cites some true events that inspired books.

The origin of Fight Club was that I was camping in the woods with some friends and at night other guys camped out next to us and turned the music up loud. I went over to ask them to lower the volume. From there a terrible fight broke out. Weeks and weeks after this episode, I was still a chrome, destroyed, I was a wreck that no one dared to look at his face, at his eyes. They didn't even ask me why I was like this, they didn't even want to imagine what my private life was like.

It's not that easy to fight, you know?

If you can manage to lift the other's feet, it is possible to do things. My father was a boxer but I don't know much, just some basic concepts to use the strength of the other against him.

He gives the impression that he would have liked to be in more TV commercials.

Yes, and being a slogan writer. I would also like to write speeches.

When the death of George Floyd in 2020, Brad Pitt wanted to make a public statement on all televisions. He liked the Fight Club speeches so much that he asked me to write that speech for him. It was brutal, very cane! Brad loved it, he recorded it on video but the televisions refused to broadcast it because it was too brutal. So I've already played Brad Pitt in black, and I'd like to do more speeches.

There is a Barcelona scene with David Sedaris.

I don't know if what I am going to tell you is publishable... It was Christmas and we went to the Fira de Santa Llúcia, in front of the cathedral. Sedaris told me: 'Chuck, I just can't believe you're gay'. 'Look, David,' I replied, 'I'm dressed in shorts and a pink shirt, I'm traveling with my husband and I'm looking for some shiny decorations to put on my Christmas tree. What else do you need? All I can do is get down on my knees and suck you right here!' He began to laugh out loud, and that filled me with pride, he who dominates the comic genre, falling apart for a phrase of mine.

What are you writing?

A novel, look, are these notes.

TRUE? I wanted to do a different ghost story.

Turns the piracy issue on its head...

Of course it makes me angry but I see the other side. Shakespeare himself was about to be forgotten. Two pirate publishers began publishing his works and selling them for a penny. They were so cheap that they reintroduced it to the market and made it popular forever. It also happens with movies: How beautiful it is to live! is one of the most viewed because the study did not register the relevant copyright. The same thing happens with Night of the Living Dead by George A. Romero, who told me that thanks to the fact that this film is in the public domain he has had a spectacular career.

Have you really thought about quitting?

The time mice were thrown at me at a public event.