'Pacheta', outraged: "I don't get those penalties"

The Real Valladolid coach, José Rojo 'Pacheta', stated after losing to Real Madrid in the return to league competition that he felt "outraged" at the penalty awarded to Javi Sánchez and asked that "there be the same criteria for everyone". 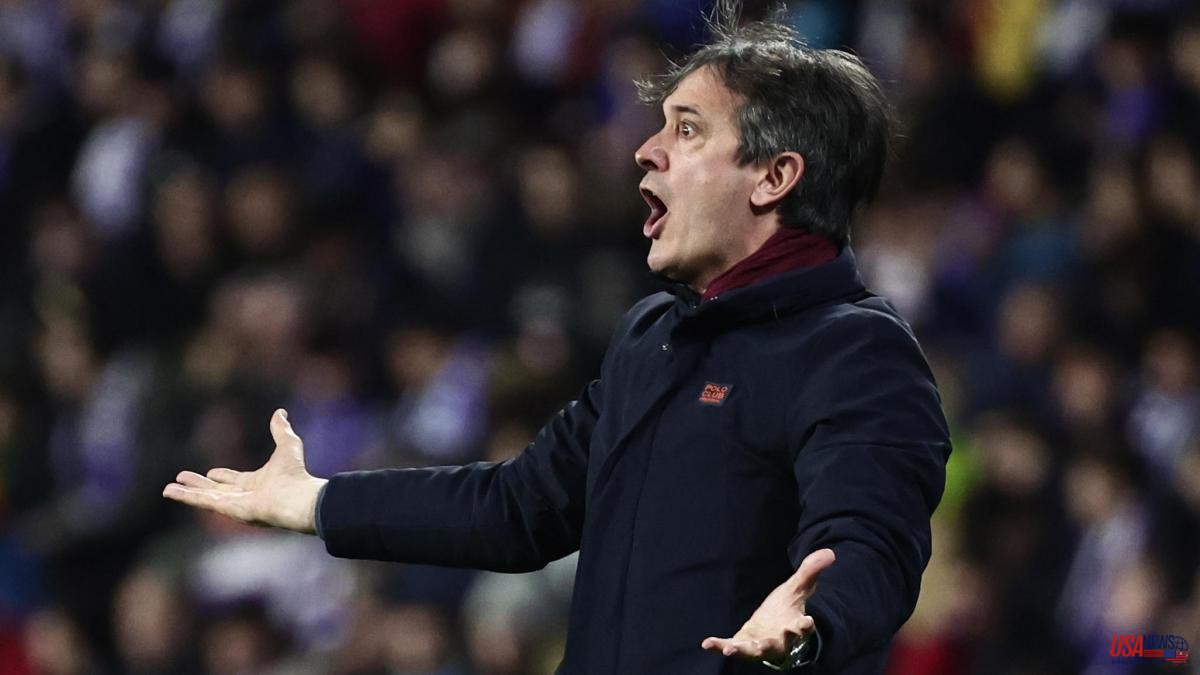 The Real Valladolid coach, José Rojo 'Pacheta', stated after losing to Real Madrid in the return to league competition that he felt "outraged" at the penalty awarded to Javi Sánchez and asked that "there be the same criteria for everyone". .

In this sense, he recalled that "in San Mamés Real Valladolid was not awarded a penalty" and for this reason he considers that he should protest, reminding the referees that "they do not pay for the mistakes of the coaches, but they do pay for those of the referees".

"If they whistle for one hand, let them all whistle. By saying that it hits his hand, that's it, but Javi Sánchez was jumping back and gave him the ball in his hand because he was trying to balance since they had pushed him. Of course, they will say that I go to cry to the crying, but it is that those penalties are not whistled for me, "he explained.

In his opinion, the Blanquivioleta team played "a great game, except for the first twenty minutes, in which the players adjusted, and Real Valladolid has had the best chances", which is why it "hurt more" than the shock ended like this.

"The game opens in a strange way. It's a penalty, because you have to swallow bile and think about Alavés, but I'm proud of the team, because we have transmitted energy, and although we came out with too much respect, when we let go with the ball and went out in the transition, he has played very well", he highlighted.

For this reason, he considered that, despite the "bittersweet taste of defeat", they will "come out stronger" from this match "because the team is playing better every time", he assured.

Regarding the expulsion of Sergio León, he acknowledged that "he had to make a gesture, but the minutes and the images will have to be seen" since he lacked more information to be able to assess what happened, and the consequences it may have.

Continuing with the match, he specified that he had the feeling that "the last push up was missing" that he intended to give with the latest changes -Weissman and Kenedy- but when he was going to make them "the penalty came".

Hence, he believed that "the game plan has been good, because Real Madrid has been better in the first 20 minutes in which they played comfortably, but then it was Real Valladolid who controlled the game and was able to address the rival on first-name terms ".

Regarding the injuries to Roque Mesa and Escudero, he pointed out that the former left with a bulge on one thigh after a blow, while Escudero had problems in the back of the thigh, although he was confident that "it wouldn't be much."

He wanted to highlight the work done by the young full-back Iván Fresneda who was "able to stop what is probably the best winger in the world, Vinicius Júnior": "He is 18 years old and the ball doesn't sting his feet, he has self-confidence, He's brave, strong and fast and he played a fantastic game", he added.

"I'm happy about the game that Fresneda played, but also that Escudero, Luis Pérez or Plata have returned. We have more and more alternatives, but we will have to suffer until the end. Of course, we hope to enjoy along the way and that people always go proud and, if possible, happy with the victories".