Only one 'ongi etorri' throughout the year, but hundreds of graffiti or banners in support of ETA

Covite denounces that hundreds of acts of support for ETA have taken place during the year that is ending, in the form of graffiti, banners, demonstrations in favor of amnesty or other types of acts. 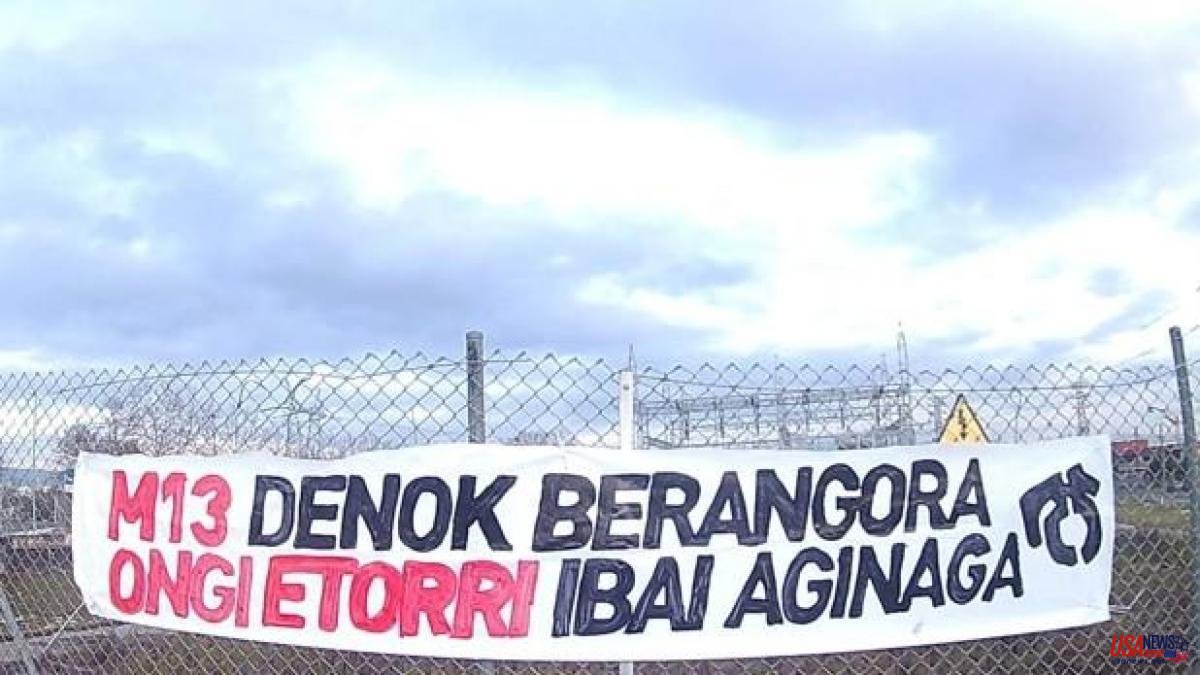 Covite denounces that hundreds of acts of support for ETA have taken place during the year that is ending, in the form of graffiti, banners, demonstrations in favor of amnesty or other types of acts. The Covite Collective of Victims of Terrorism confirms the end of public receptions for ETA prisoners, known as 'ongi etorri', although it points out that what it considers acts of “cult to ETA” have increased to 547, compared to 228 from last year.

In relation to the ongi etorri, Covite points out that there has only been one in all of 2022. It is the reception of former ETA member Ibai Aginaga, who was released from prison in March after having served a 21-year sentence for depositing weapons, illicit association and falsification of documents. Aginaga was received by around 200 people at a fronton in Berango, although the Abertzale left distanced itself from this act. Covite points out in his report that this reception was organized by "the ETA dissidence."

The data from Covite, therefore, would corroborate that the public reception of ETA prisoners would have ended since a year ago, in November 2021, the EPPK prisoner group announced the end of this type of act. One month after that announcement, on December 23, Iñaki Etxeberria was received in Pamplona, ​​who was released from prison after serving 25 years for the murder of five soldiers in the attack on Plaza de la Cruz Verde (Madrid). , although also in that case the official line of Sortu distanced itself from the reception.

The end of the ongi etorri has led Covite to have "invested this year a greater effort in documenting" other types of acts of what it considers "cult of ETA". Along these lines, the Collective speaks of “an exponential increase”.

Based on the type of acts, Covite denounces that 226 "graffiti and banners explicitly glorifying ETA and its prisoners" have been registered, 43% more than in 2021.

In addition, the Collective denounces that during 2022 there have been 174 demonstrations in which amnesty has been demanded, "but not the approach to Basque prisons", of the imprisoned ETA members, which is 190% more than the previous year.

In his report, he also denounces 47 popular festivals "celebrated specifically to exalt ETA or harass the Civil Guard", such as the Ospa Eguna, which calls for the departure of the Civil Guard in Alsasua, or the Gudari Eguna, which on September 27 commemorates the execution of Txiki and Otaegi in 1975. Covite denounces that these quotes are used to exalt terrorism.

Finally, in the 'others' category, Covite adds 44 public tributes to dead or murdered members of ETA or acts such as the staging of "Christmas dinners on public roads" in order to "symbolize that they cannot dine with their relatives in Christmas Eve for being in prison."

Consuelo Ordóñez, sister of Gregorio Ordóñez, assassinated by ETA in 1995 and president of Covite, stresses that "the streets and public spaces in Euskadi and Navarra have always been a showcase for the demands of the nationalist left, and they still are today" .

In Covite they regret that, "despite the fact that the phenomenon of violent radicalization in favor of ETA" does not diminish, the institutions "continue without treating this issue with the seriousness and urgency it deserves."

From the Collective they also criticize that "the efforts to prevent radicalization, including the National Prevention Plan, have focused all these years on jihadism and have ignored the main focus of radicalization in the country", of which, in their opinion, "the politicians of the abertzale left are the ones that contribute the most".