Just one day after firing a record 23 different-range missiles, North Korea once again took its arsenal out for a walk and launched three more missiles Thursday in the direction of Japan, including what appears to be an intercontinental ballistic missile. 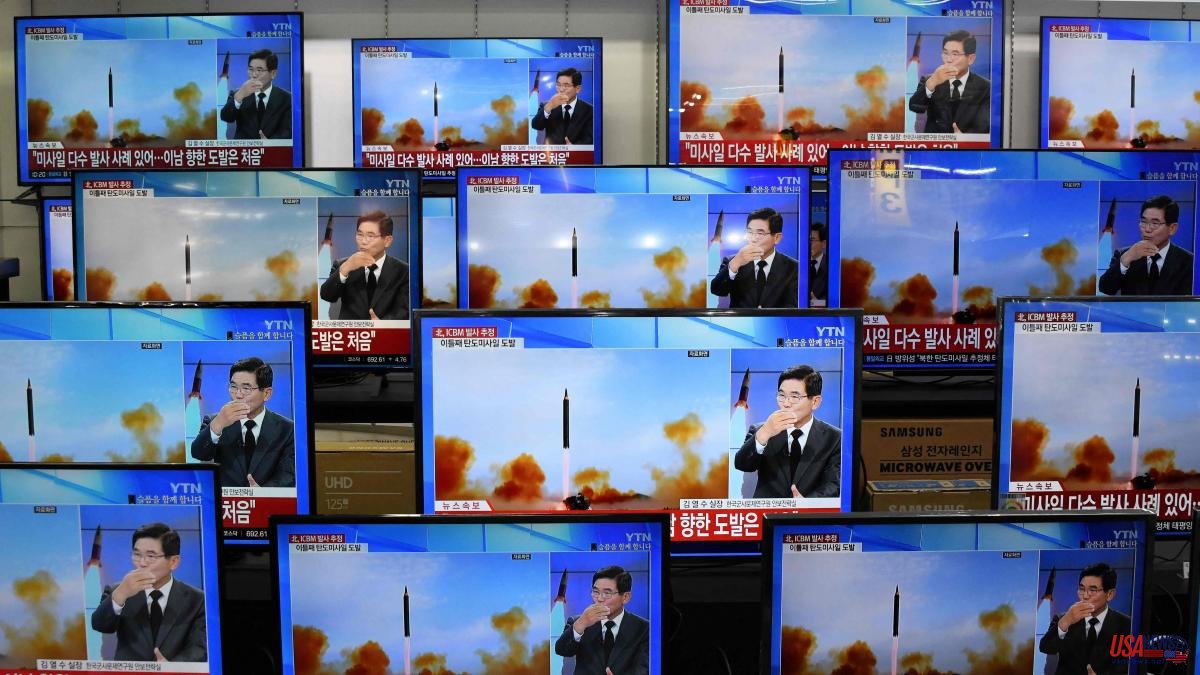 Just one day after firing a record 23 different-range missiles, North Korea once again took its arsenal out for a walk and launched three more missiles Thursday in the direction of Japan, including what appears to be an intercontinental ballistic missile. His flight caused alerts to be activated in three Japanese prefectures - Niigata, Yamagata and Miyagi, in the north of the country - asking their population to seek refuge.

The alert from the J-Alert system was issued around 7:46 a.m. local time (22:46 GMT) while the missile flew over the area before heading to the Pacific, where it fell around 8:10 a.m. (23:10 GMT) without causing damage, according to the Coast Guard. “Missile launch. Missile launch. A missile is believed to have been launched from North Korea. Evacuate to a building or underground," the Japanese prime minister's office tweeted at the time.

However, after analyzing the flight data, the Japanese Defense Ministry determined that the rocket had not flown through Japanese airspace, as it did in a similar incident that occurred in early October. According to their data, the device traveled at an altitude of about 2,000 kilometers and traveled about 750 kilometers before falling into the sea.

On October 4, North Korea fired an intermediate-range ballistic missile that flew over northern Japan before falling into the Pacific, in the first such incident since 2017, which also meant the longest distance traveled to date by a North Korean projectile (about 4,500 kilometers).

For its part, the South Korean Joint Chiefs of Staff (JCS) said it detected the launch from the Sunan area, near Pyongyang, of what appears to be an intercontinental projectile at 7:40 a.m. (local time) and the firing of two short-range missiles. reach almost an hour later from Kaechon, south of the capital.

This new escalation comes just one day after one of the 23 North Korean missiles fired yesterday crossed the Northern Limit Line (LLN), a dividing line that delimits the maritime border between the two countries, and fell about 60 kilometers from the South Korean city of Sokcho. , within the special economic zone (SEZ) of South Korea.

Shortly after, Seoul responded to this provocation by firing three air-to-ground precision missiles that hit the waters near the coast of its northern neighbor, something also unprecedented. This is a notable escalation after both countries exchanged warning shots in the vicinity of the NLL on October 24 in response to alleged naval provocations by their neighbor.

The recent dynamic underpins the rise in tensions on the Korean peninsula. So far this year, North Korea has already conducted some 40 missile tests, ranging from submarine-launched weapons to intercontinental ballistic missiles capable of reaching US soil.

In addition, everything indicates that the country is prepared to carry out what would be its seventh nuclear test, the first for five years, while the country has declared that it does not intend to abandon its nuclear arsenal and could use it for an attack preventive in case they feel in danger.

Meanwhile, the regional allies - the United States, South Korea and Japan - have exponentially increased joint military exercises in the region, seen from the North as a rehearsal for a possible invasion.

This week's North Korean tests are its response to the first large-scale joint air exercises by the Seoul and Washington Air Forces. Its exercises include the deployment between Monday and Friday of more than 240 aircraft, including state-of-the-art fighters, and include some 1,600 sorties and a continuous 24-hour simulation of interception and air defense operations.