North Korea fired two short-range ballistic missiles into the Sea of ​​Japan (called the East Sea in the two Koreas), according to the South Korean Army, in what is the fourth such test in the last week, while increasing the tension on the Korean peninsula. 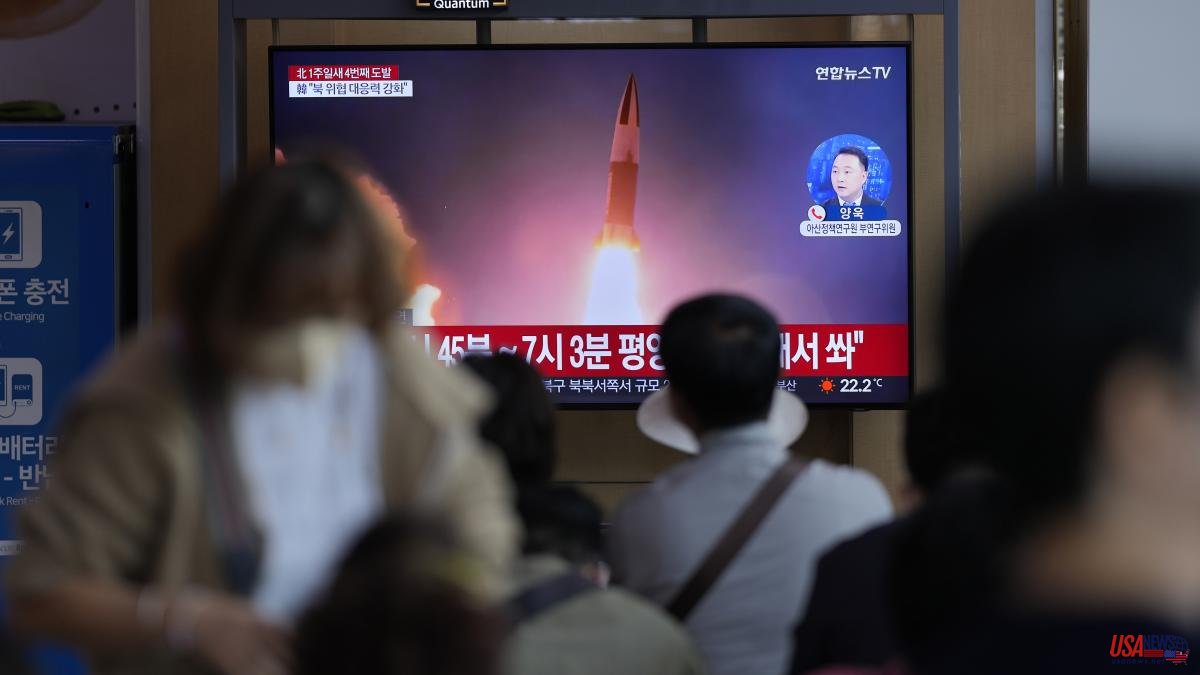 North Korea fired two short-range ballistic missiles into the Sea of ​​Japan (called the East Sea in the two Koreas), according to the South Korean Army, in what is the fourth such test in the last week, while increasing the tension on the Korean peninsula.

The new test takes place after the visit to South Korea until last Thursday of the vice president of the United States, Kamala Harris, and that Seoul, Washington and Tokyo carried out joint anti-submarine military exercises on Friday for the first time in five years and for counter Pyongyang's weapons developments.

The launches took place from the Sunan area in Pyongyang between 6:45 and 7:03 local time on Saturday, and the missiles traveled about 350 kilometers and reached an apogee of 30 kilometers before falling into the East Sea, according to the detailed report. South Korean Joint Chiefs of Staff (JCS).

"North Korea's recent series of ballistic missile tests is a significant provocation that undermines peace not only on the Korean peninsula, but also for the international community, and clearly violates UN Security Council resolutions," he said. the JCS.

The missiles fell outside the waters of the exclusive economic space of Japan (EEZ), according to the authorities of this country, who have no evidence of any damage to Japanese vessels or ships as a result of the launches. However, Tokyo lodged a protest against North Korea through diplomatic channels, Japanese Defense Minister Toshiro Ino said, adding that the missiles possibly flew on an "irregular trajectory" designed to evade missile defense.

North Korea fired two more short-range ballistic missiles into the Sea of ​​Japan last Thursday, hours after Harris took off from the South, following similar launches the day before and one more last Saturday. During his trip to South Korea, Harris visited the militarized inter-Korean border and met in Seoul with South Korean President Yoon Suk-yeol, to whom he underlined Washington's commitment to deploy strategic assets to defend the South based on the actions of the North.

The succession of weapons tests in the North, which for the moment has not ruled on them, is interpreted as a response to the deployment of the US aircraft carrier USS "Ronald Reagan" in the peninsula.

The day before, the USS "Ronald Reagan" carried out joint exercises with the South Korean and Japanese naval forces in the Sea of ​​Japan in order to "detect, identify and track North Korean submarines equipped with technology to launch SLBMs (ballistic missiles that fired from a submersible)". The last time that the "Ronald Reagan" traveled to the peninsula to carry out joint maneuvers of this type was in September 2017, in full escalation of tension after the last North Korean nuclear test to date.

Seoul and Washington sought with these exercises to send a message of strength at a time when their intelligence services assume that the hermetic regime has been ready for months to execute what would be its seventh underground nuclear detonation in its Punggye test center. -ri (northeast of the country).

In addition, at the beginning of September the North Korean regime toughened its nuclear policy by enacting a law that would allow it to carry out preventive atomic attacks if its integrity or its leaders are threatened, in addition to ensuring that it will never give up this type of weaponry.

South Korean President Yoon Suk Yeol warned Pyongyang on Saturday that it will receive "an overwhelming response" if it tries to use nuclear weapons, during his speech on Armed Forces Day and after the recent spate of missile launches. from North. With its policy of developing nuclear weapons, North Korea "is threatening the survival and prosperity" of the South, Yoon said during his speech to troops at the Gyeryongdae military compound, about 160 kilometers south of Seoul.