North Korea today launched three short-range ballistic missiles into the Sea of ​​Japan in what is the umpteenth show of force by the regime in a year in which it has carried out almost fifty tests of this type, a record number. 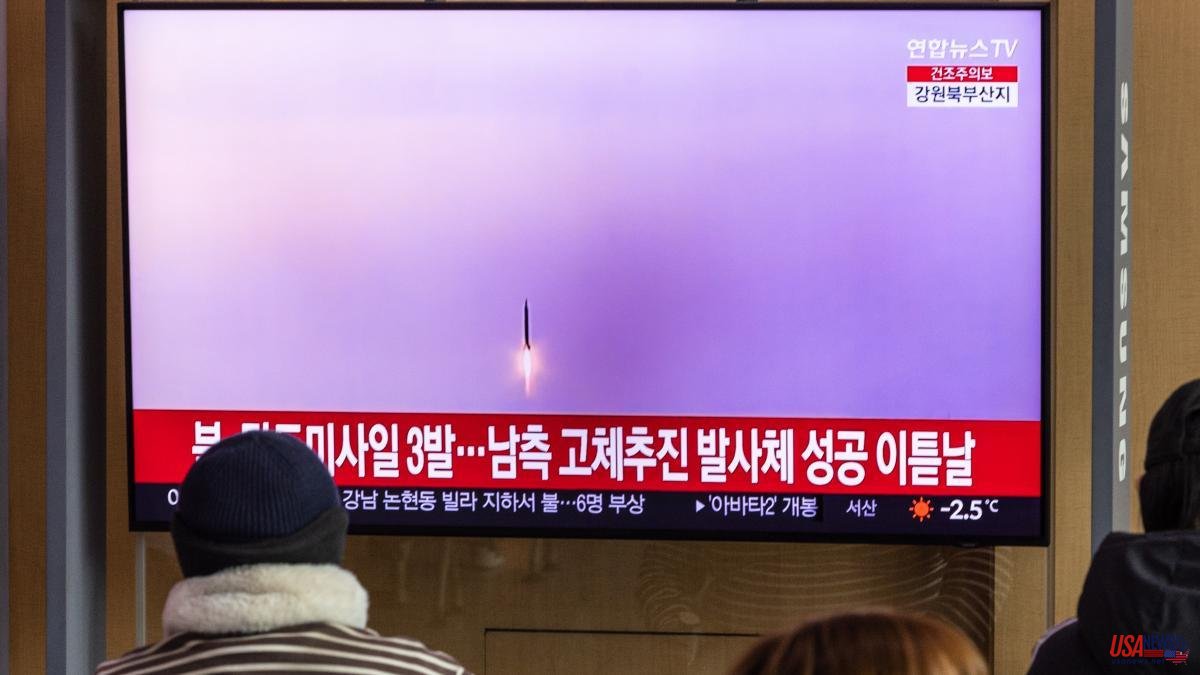 North Korea today launched three short-range ballistic missiles into the Sea of ​​Japan in what is the umpteenth show of force by the regime in a year in which it has carried out almost fifty tests of this type, a record number.

The Joint Chiefs of Staff (JCS) detailed in a statement that it detected "three short-range ballistic missiles (SRBM) launched by North Korea into the East Sea (name given to the Sea of ​​Japan in the two Koreas) from the county area of Junghwa, in the province of North Hwanghae (southwest of the country) around 8:00 local time (23:00 GMT on Friday)".

The missiles fell into the Sea of ​​Japan after traveling about 350 kilometers and reaching a maximum height of about 100 kilometers, according to estimates by the South Korean and Japanese armies, which initially reported the launch of a single ballistic-type projectile.

The JCS explained that the missile's specifications are being "deeply analyzed" by South Korean and US military intelligence.

The South Korean General Staff harshly condemned this test, calling it "significant provocation" and considering it a "clear violation" of the sanctions imposed by the UN Security Council against Pyongyang for its weapons of mass destruction programs.

Today's test comes at a time when tension is at its highest on the Korean peninsula and just a day after Seoul conducted a test for a future solid-fuel space rocket with which it wants to speed up the deployment of satellites military recognition.

Precisely, the regime launched on December 19 two medium-range ballistic missiles (MRBM) to test the operation of a spy satellite that it has said it wants to have ready by April.

This year North Korea, immersed in a five-year weapons modernization plan and still completely closed to the outside due to the pandemic, has launched practically at least 47 projectiles of different types, according to estimates by the Nuclear Threat Initiative (NTI) of Washington.

The tests have increased especially in the second half of the year, when the Kim Jong-un regime has been carrying out these tests to replicate the South and the United States.

Faced with the regime's refusal to resume dialogue and its insistence on strengthening its arsenal, Seoul and Washington restarted their major military maneuvers since May and have chosen to respond to Pyongyang's tests with the rotating deployment of US strategic assets on the peninsula, which it has brought about and accelerated an action-reaction cycle that experts view with concern.

This latest release also comes at a time when the North Korean single party is holding an important plenary session in Pyongyang to set its 2023 agenda and the regime is expected to publish Kim Jong-un's closing speech tomorrow, January 1, which could include messages for the US or South Korea.