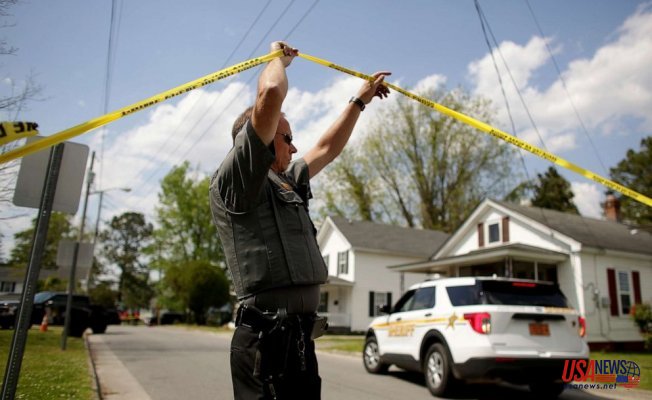 "It's been a tragic day," the sheriff told reporters.

A sheriff's deputy shot killed a Black man whilst executing a search warrant in North Carolina on Wednesday, authorities said.

The shooting happened at approximately 8:30 a.m. ET as deputies from the Pasquotank County Sheriff's Office tried to serve the man -- identified as Andrew Brown Jr. -- a search warrant at his home in Elizabeth City, about 170 miles north of Raleigh. Brown was fatally wounded during the encounter, according to Pasquotank County Sheriff Tommy Wooten.

"It has been a dreadful day," Wooten said in a brief press conference Wednesday.

The sheriff told colleagues that he was not convinced of Brown's era, but court records show he was 42.

The unnamed deputy who fired the fatal shot was put on administrative leave pending a review by the North Carolina State Bureau of Investigation, according to Wooten, who pledged to become"transparent and carry the appropriate action based on the findings."

"I have put together a team of law enforcement to visit Pasquotank County to guarantee the security and protection of the citizens in our area," the sheriff said.

The deputy was wearing an active body camera, however, Wooten said the footage could only be released in the order of a judge. The agency of investigation does have the body camera footage for its own investigation.

"We are working that right now as tough as we could," he told reporters. "We will be clear with this circumstance, absolutely."

"If proof indicates any of my deputies violated the law, or policies, they will be held liable because that is what the citizens expect me to perform and it is the right thing to do," Wooten said Thursday.

Masha Rogers, the special agent in control of the northeastern district of North Carolina State Bureau of Investigation, said investigators will conduct a comprehensive probe before turning their findings to Andrew Womble, the district attorney for the state's first prosecutorial district.

Womble said that his office will be searching to get"accurate answers rather than fast answers."

"This won't be a rush to judgement," Womble informed reporters. "We're going to wait for this investigation as we are duty bound to do."

Further information about the shooting weren't immediately available, and Wooten didn't go into detail Thursday, stating they did not have all the facts.

Brown's death is the hottest in a ton of officer-involved shootings of Black men, women and kids lately who have sparked protests nationwide as well as overseas.

Dozens of people, some holding signs which read"Black Lives Issue" and"Stop Killing Unarmed Black Men," gathered on Wednesday in the scene of the shooting in Elizabeth City and outside City Hall where the City Council held a crisis meeting. The crowds grew as the sun set, together with hundreds of people blocking traffic on a main thoroughfare of Elizabeth City and yet another band congregating outside Pasquotank County Sheriff's Office.

Brown's aunt, Martha McCullen, who said she raised him after his parents died, told The Associated Press that her nephew"was a fantastic man,""a good dad" and"was about to receive his kids back."

"The police didn't need to shoot my baby," McCullen told AP. "Now his children will not never see him again."