Noppert, the giant 'oranje' and roof of the World Cup

The Doha skyline is impressive. 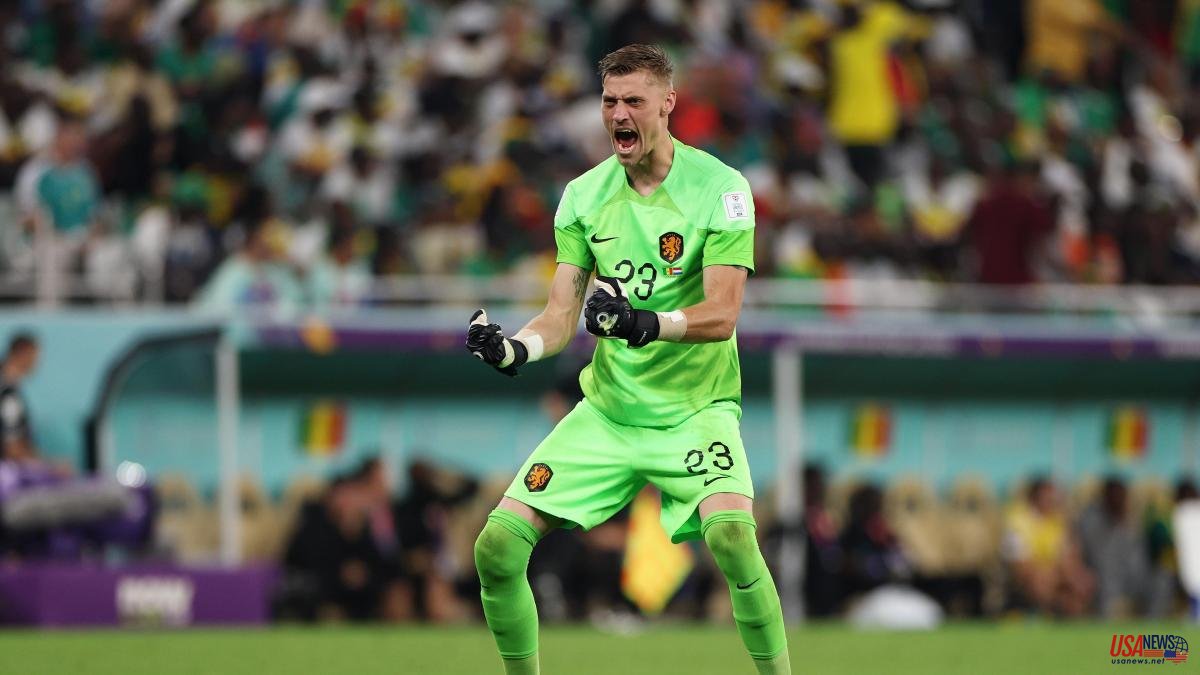 The Doha skyline is impressive. There are more than a dozen buildings over 200 meters high. The Aspire Tower, the Al Fardam Residences, the Palm Towers, the Burj... A new tower should be added to these buildings. His name is Andries Noppert and he was one of the sensations on the first day of the World Cup. Dressed entirely in green (even the boots), the stamp of the goalkeeper from the Netherlands is kilometric. At 2.03 meters, he is the tallest of those called up in Qatar and in any other world cup, surpassing two giraffes by one centimeter such as former strikers Zigic (Serbia) and Koller (Czech Republic).

Noppert's presence under the sticks in the debut against Senegal surprised. Although it is already known that Louis van Gaal, the Oranje coach, has a fixation on goalkeepers. In his day the coach opted for Van der Sar at Ajax, signed the little-known Ruud Hesp for Barça and in the 2014 World Cup he brought on Krul in the 120th minute only for him to save a shot from Costa Rica in the shootout. penalties. So he went to the semifinals. The choice of Noppert could be considered another of his eccentricities.

Paasver, the Ajax goalkeeper, and Bijlow, the Feyenoord goalkeeper, remained on the bench, two of the greats of the Eredivisie. However, Van Gaal preferred the gloves of Heerenveen, a modest mid-table team.

Despite his size, Noppert's is an irruption that few saw coming because he is a newcomer to the elite. At 28 years old, he only has 32 games in the First Division as a background. And that he made his debut in August 2017 in the ranks of NAC Breda.

It took him so long to settle down that his family on more than one occasion advised him to give up football and opt for another "normal" job. He was attracted to being a policeman. But he never gave up.

Without opportunities in his country, he went to Italy, to Foggia, in Serie B. There, in a year and a half, he did not stand out either. On the contrary, he ended up being a substitute for the very veteran Albano Bizarri. And in May 2019 the Apulia team was relegated to Third. More arguments in favor of the family.

The goalkeeper did not give up. He returned to Dordrecht, from the second Dutch. He was only able to play two games because he tore ligaments in his knee. More pressure from yours. But he, erre that erre.

He returned the Go Ahead Eagles. He did not play in his first year but the club rose. He continued as a substitute, in the shadow of the Surinamese Hahn, until in January 2021 he had to replace him. He conceded 20 goals in 15 games but drew the attention of Heerenveen, his hometown team. There he is being a prophet and has convinced Van Gaal, although he has only saved one penalty in his career (back in 2019).

This Friday at the Jalifa stadium he could coincide on the field with Ángel Mena, the striker from Ecuador. They are separated by 35 centimeters. Mena measures 1.68 and is one of the shortest. Noppert, the Oranje giant, is the roof of Qatar.