Nicolas Cage and the forest truffles

It is impossible to escape from Nicolas Cage. 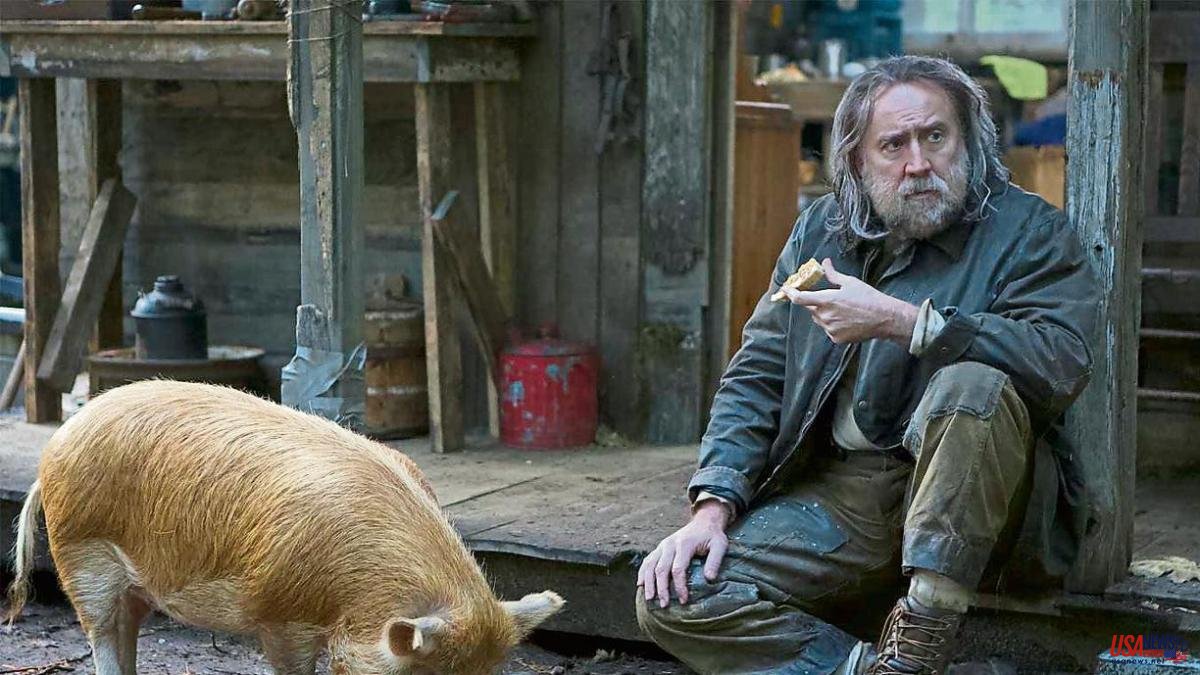 It is impossible to escape from Nicolas Cage. In a matter of a month we have seen him, playing himself, in The Unbearable Weight of a Huge Talent, which arrived in air-conditioned rooms on June 17, and we will see him as a hirsute and pestilential hermit who shares his life with a pig truffle hunter in the remarkable Pig, with a premiere scheduled for mid-July. In the meantime, we will surely have seen a few memes, in the form of animated gifs, of their most exorbitant expressions in the Whatsapp of the group of parents, in that of school friends or of the group that is funny included. Some time ago, the most histrionic of the Coppolas became the fundamental piece of the visual alphabet with which we synthesize our daily exchanges. It's been a while since Cage became a meme that can't stop making movies. He has no criteria other than to keep busy, or to pay off his massive debts.

In The Unbearable Weight..., the fan tribute signed by the unknown Tom Gornican, which Cage himself has ended up producing –as Pig–, presents himself as a veteran actor, who is about to leave him tired of chaining by-products, without going any further than that same film in which he stars alongside Pedro Pascal. The Mexican embodies a supposed arms dealer who operates – attention – in Mallorca. Although it is not easy to recognize the landscapes of the largest of the Balearic Islands. Basically because the film was shot in the surroundings of Dubrovnik. There is a moment when we are about to recognize the famous house that Michael Douglas has in the Serra de Tramontana. But no, it is still the Croatian coast. The most native throughout the footage is the Sevillian Paco León, who acts as the oxygenated villain, and ends up being the best part of the show. A pity that they did not also count on him to direct and rewrite it.

Years ago, Jean Claude Van Damme played a similar metagame –JCVD (Mabrouk El Mechri, 2008)–, which is remembered as more successful, and at the time innovative. Here even the meta part is false, because neither the ex-wife nor Cage's daughter are who they say they are. Nicolas Cage's private life in the real world is more fun, with that mania for compulsively collecting from two-headed snakes to dinosaur skulls, from haunted mansions to innumerable sports cars... Although he has finally achieved some peace with his fifth wife, the young Riko Shibata, who will be the mother of their first daughter.

Entertaining, the Gornican movie works best as a walk through the Nicolas Cage Imaginary Museum. Nicky even appears to Cage, his young self, pampered by Coppola, Lynch and the Coens, with whom he even makes out, and you can even see Mandy's huge saber (Panos Cosmatos, 2018), one of his best films , at the height of Adaptation (Spike Jonze, 2002) or Corrupt Lieutenant (Werner Herzog, 2009). The Oscar for Leaving Las Vegas (Mike Figgis, 1995), achieved before becoming another Action-Man in commercial cinema, could have been the driving force behind the plot, but the writers preferred the kidnapping of the Catalan president's daughter...

Pig, Michael Sarnoski's feature debut, undoubtedly contains another of his great performances, albeit in a minimalist key. Farewell to Croatian-Majorcan luxury, welcome to the cabin in the woods. Cage is here a cook retired from the madding crowd as a result of a personal tragedy. He lives by searching for truffles, the gold of the forests. But his pig, like the president's daughter, will also be kidnapped. Cage bets here on a containment that is compensated by the bizarre lack of hygiene of the character, next to which his pig seems immaculate. He is a Cage along the lines of Joe (David Gordon Green, 2013), a recommendable adaptation of the novel by the great Larry Brown, that writer-firefighter from Mississippi.

Joe and the pig's best friend prefigure Cage's double jump into the western, with The Old Way, in which he will play an old gunslinger haunted by his past, and above all Butcher's Crossing, which of course is the adaptation of the novel namesake of the great John Williams –the writer of Stoner (which in turn will be made into a film by Joe Wright)–. It is to be expected that, in the Wild West, Cage bets on the rude rustic contention. Although, between the two he will also play Dracula himself in Renfield, a blockbuster, destined to return him to the status of a profitable star after hits like Ghost Rider: Ghost Rider (2007). At least all the meat has been put on the grill to make it so, hiring cathodic successful screenwriters such as Robert Kirkman (The Walking Dead) and Ryan Ridley (Rick and Morty), and putting Chris McKay (The LEGO Movie) after the camera.

Cage already wore fangs in the very outdated Vampire Kisses (Robert Bierman, 1988), where he ate a cockroach to give greater verism to the supposed transformation of his character. If we were to count the memes, Vampire Kisses could win. But this new Dracula, in which Nicholas Hoult will play R.M. Renfield, his faithful servant, seems designed to win that battle of memes. The look that they have put on Cage, with exaggerated makeup and a lilac suit, seems to be that of the Joker, a role for which the actor has always been the eternal candidate.