New life for the Espai Corberó, the hidden jewel of Esplugues de Llobregat

In the medieval heart of Esplugues de Llobregat, Xavier Corberó (1935-2017) began to build in 1968 what would be the great work of his life. 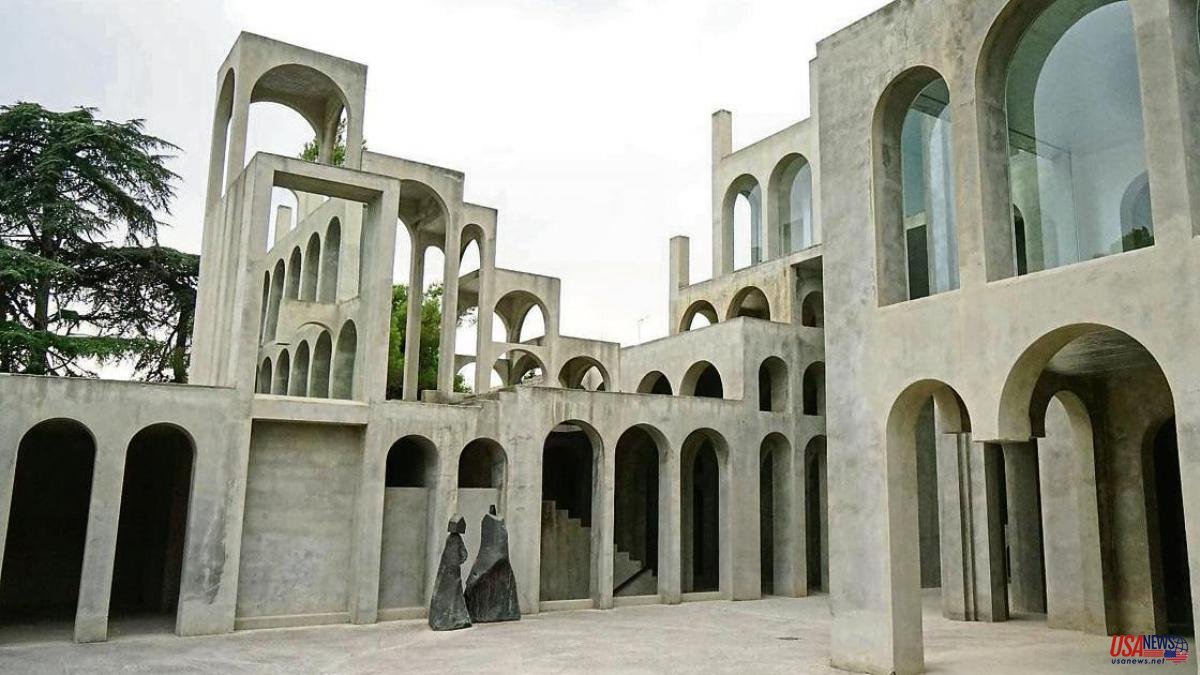 In the medieval heart of Esplugues de Llobregat, Xavier Corberó (1935-2017) began to build in 1968 what would be the great work of his life. An epic project that was born with the purchase of a country house, Can Cargol, as a place to live and work, and a refuge for other artists, to which over the course of five decades another eight buildings would be added, with their labyrinthine rooms, stairs that recall the impossible architectures of Escher, ponds, gardens, patios with cement arcades at various heights and a forest inhabited by characters in stone and bronze.

The Espai XC, where Corberó invested everything he was earning and on which he continued to work obsessively when he died at the age of 81, is today an authentic inhabitable sculpture, a total and almost secret work despite the fact that in recent times it has become place of pilgrimage for film shoots and fashion shows. But his destiny is about to take a 180 degree turn. The City Council of Esplugues de Llobregat finalizes the purchase of part of the complex to give it a new life as a cultural facility open to the public.

As La Vanguardia has been able to learn, the operation is well advanced and could be finalized in the coming weeks, only missing some administrative procedures related to its status as a cultural asset of local interest included in the Inventory of the Architectural Heritage of Catalonia. Last May, the plenary session of the City Council chaired by the socialist mayor Pilar Díaz approved a budget increase of 2.9 million euros to be able to deal with the acquisition. Currently, the only tenant of the complex is the artist's widow, Maria Dolores Rica, who is also in charge of preserving Corberó's legacy.

The Espai Corberó, built around the old Casa dels Cecs and linked to his own residence, workshop and museum, consists of 1,995 square meters built on a 2,055-meter plot. It basically consists of a lateral body built on the ground floor perpendicular to Calle Iglesia, various patios, water reservoirs and an underground auditorium with capacity for between 250 and 300 people. This last space, of about 700 square metres, has an open floor plan with a vaulted ceiling and no supporting columns, which gives it great architectural interest due to the uniqueness of its structure and composition.

Inside the plot, between two patios, another building is built based on reinforced concrete slabs and semicircular arches that form a series of rooms and open or semi-closed terraces at different heights. The complex also includes around thirty sculptures that would become municipal property, adding to those already in various spaces in Esplugues de Llobregat such as Samurai, La família or Trobada.

Xavier Corberó lived a large part of his life abroad (Switzerland, the United Kingdom and New York), although Esplugues was his definitive home. With work in more than 30 museums around the world, including the MOMA in New York, the Stedelijk Museum in Amsterdam or the Victoria and Albert Museum in London, he said that when he turned 19 he went to a notary public to formally disinherit himself, because he considered that he needed to start from scratch if he wanted to dedicate himself to art one hundred percent. Influenced by the ideas of the Bauhaus, in 1972 he created, together with his residence in Esplugues, the Center for Artistic Activities and Research of Catalonia (CAIAC), a residence for artists and artisan workshops that permanently welcomed a group of creators of various specialties. Among them, the one who was his partner, the jewelry designer Elsa Peretti.

“The drama of art schools is that the only possible way out for their students is genius. And a genius only happens very rarely. In our center it is possible that geniuses will come out, but at least it is certain that good professionals will come out who will be able to earn a decent living”, Corberó explained to Soledad Balaguer in an interview published in La Vanguardia shortly after the opening of the center. For this purpose, the sculptor had been acquiring various orchards and farmhouses located next to what was already his residence on Montserrat Street. And the company was not turning out to be easy at all: “My long hair, my gypsy appearance and above all, saying that I am a sculptor, does not exactly make it easy for me to ask for a loan from a bank, to do something so totally chimerical”.

Corberó mortgaged himself many times to carry out that colossal work that in recent years, and despite leaving it unfinished, he described as "a miracle". Since his disappearance, the artist, in 2017, his widow has maintained the house by renting it for events and advertising campaigns. Woody Allen chose it as the workshop for the painter who is the protagonist of the film Vicky Cristina Barcelona, ​​played by Javier Bardem, and it has hosted the 080 catwalk shows.

The artist, who designed the medals for the Olympic Games, played a decisive role in the public sculpture plan promoted by the Cultural Olympiad, advising Mayor Pasqual Maragall and making it easier for Barcelona to have works by artists such as Lichtenstein, Richard Serra, Botero, Anthony Caro or Claes Oldenburg, among others.