Netherlands wake up in time against Senegal

Don't pay attention to the topics. 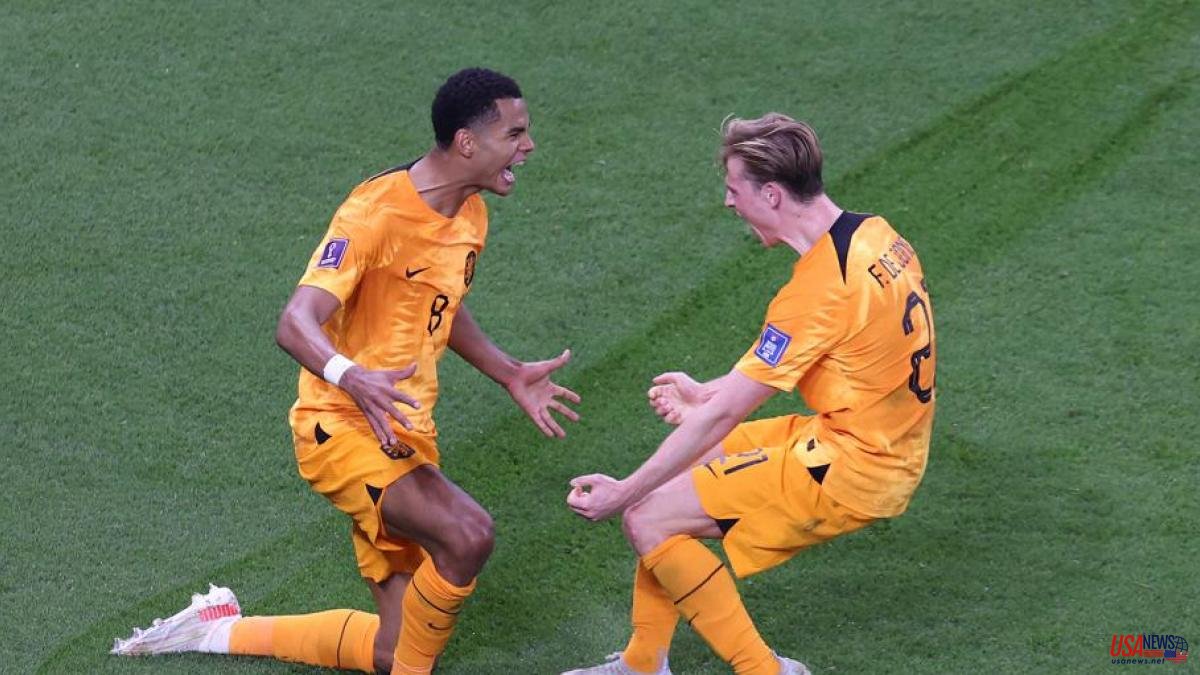 Don't pay attention to the topics. Senegal represents the joy of the African teams and the Netherlands contains the essence of the best European attacking football. That's what they say. The two met at the Al Thumama stadium in Doha and a lopsided match came out that Senegal will hate and the Dutch will celebrate because they saved it with just a few minutes to go. Frenkie de Jong launched a cross from the left to try and Cody Gakpo, taking advantage of his height, finished it off into the net due in part to a faulty start by goalkeeper Mendy. Klaassen, at the last second, took advantage of a play by Memphis to finish off and extend the result and give his team a very good but somewhat fictitious result. [Check the results of the World Cup in Qatar].

This is how the game is summed up. Because if one thing became clear, it is that the days in which the Netherlands captivated the world with its avant-garde football are long gone. The Oranje team, coached by Louis van Gaal as the last service of his career, moved 80 minutes as a nervous and excessively predictable team, gripped perhaps by responsibility and probably also because its players do not even touch the quality of their predecessors. mythical. Cruyff, Neeskens, Van Basten, Gullit, Bergkamp, ​​Robben, Van Persie... too great. Too much shade.

Little is striking in the Netherlands today. If anything the leadership of Van Dijk behind, the will to be seen by Frenkie de Jong and the speed of Bergwijn, a tough and beautiful winger to watch.

On the opposite side, Senegal did not dazzle either, which at least had an alibi: the loss of its indisputable star Sadio Mané. Accompanied by the percussion of their people in the stands from minute 1 to 90 (literally), the Senegalese, scattered around the field in a 4-3-3 more Dutch than anything else, attacked little but did so with danger. His sharpest man was Ismaila Sarr, always starting from the left. Dumfries as a right winger, and De Ligt, as a center back in coverage, had a hard time at times.

That the Netherlands was playing stressed was shown by De Jong in the 19th minute. His team braided a good counterattack and was left alone before goalkeeper Mendy. It became night for the Barça midfielder, born for the creation of the game but denied before the definition. Soccer curiosities. Apart from rowdy attacking actions, the Netherlands was dangerous from set pieces and little else. You can see Van Gaal's hand there. Van Dijk narrowly finished off a high corner at the start of the second half when the 0-0 lead was beginning to take shape.

Van Gaal wanted to change the dynamics of the game by bringing on Memphis Depay, but for now what he got was two big scares: first, Boulaye Dia starred in the best chance of the game up to then, forcing Noppert into a good stretch to cover the first stick; then Gueye forced the Oranje goalkeeper to show up again with a shot from the edge that was later ruled out for positional offside. The Senegalese drums continued to beat. Holland disappeared.

It was then that an official move changed the game and who knows if the trajectory of the Netherlands in this World Cup. Cody Gakpo, a PSV player, hunted her from above. And Van Gaal smiled, next to his assistant Edgar Davids. Then came Klaassen's sentence. the play was signed by Memphis but Mendy's rebound, bad again, was taken advantage of by the Ajax player. [Check the World Cup rankings in Qatar].

Incidents: match corresponding to the first day of group A of the Qatar 2022 World Cup, played at the Al Thumama stadium before 41,721 spectators, according to the official figure provided during the match.