Neither Barcelona nor Madrid; the frustrated Olympic Games of the Franco regime

An insubstantial proposal in an unsustainable context. 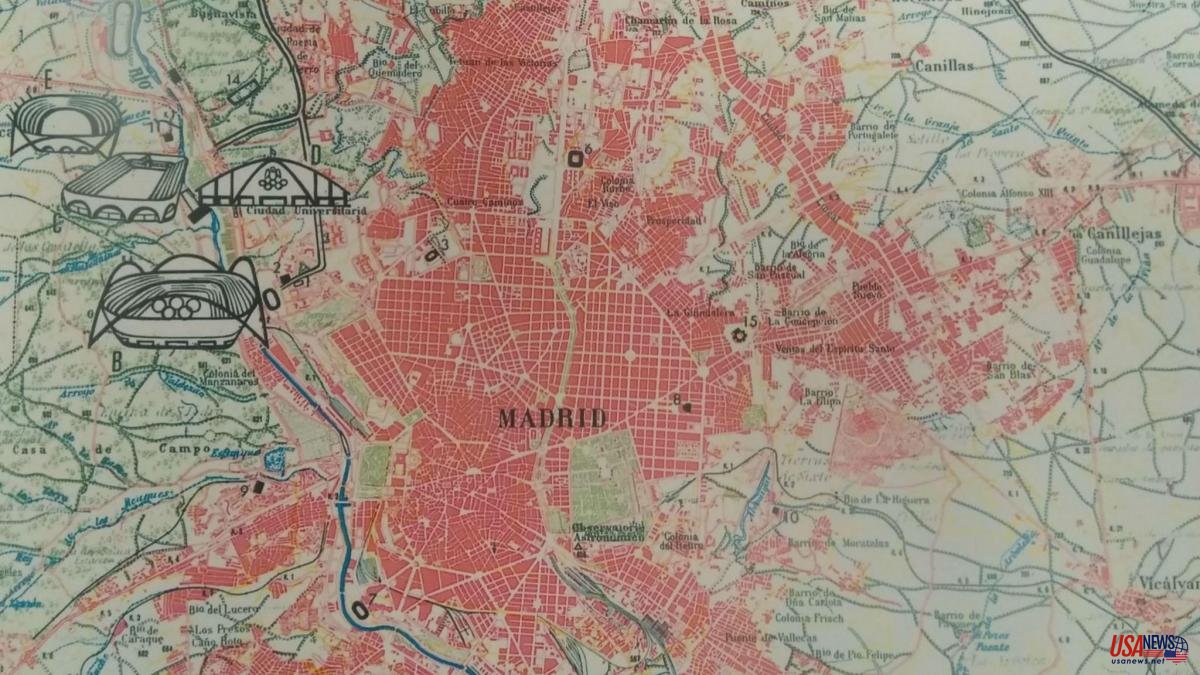 An insubstantial proposal in an unsustainable context. This is how Madrid's candidacy for the 1972 Olympic Games could be defined, which Munich ended up celebrating, after a dispute with Barcelona resolved in an express meeting of the Spanish Olympic Committee (COE) without the presence of the bulk of the representatives who defended the Catalan candidacy .

Although Barcelona was the best card that could be played by a regime that was trying to open up to the world after the success of the 1955 Mediterranean Games and its historic Olympic vocation, the COE did not hesitate to designate Madrid with just six days to go the admission period closed, at a meeting held in the capital on Christmas Eve 1965.

Just over a month earlier, the International Olympic Committee (IOC) had held its 63rd Plenary Session in Madrid. It was there that the national delegate for Physical Education and Sports, José Antonio Elola-Olaso, advanced the intention of presenting a Spanish Olympic candidacy in the slightly excerpted speech that we offer.

This was also suggested by the president of this organization, the American Avery Brundage, who in his first words on the opening day of the event referred to the "Olympic spirit" that Francisco Franco himself, also present at the opening, had transmitted to him on those days. of the session.

No sooner said than done. Filled with Olympism, the institutions got down to work and Barcelona presented a candidacy to the COE endorsed by its main facilities – the renovated Olympic Stadium and the new Sports Palace –, its infrastructures and its organizational experience.

The city, in fact, had already tried to host the 1920, 1924 and 1936 Olympic Games and more recently had successfully held three world championships (tennis, roller hockey and roller skating) and two in Europe (rowing and junior soccer). In addition to the Peña Rhin Grand Prix, the forerunner of Formula-1, and had hosted various stages of the Tour de France. Logically, the frustrated People's Olympiad of 1936, which was to challenge the Berlin Games, presided over by Adolf Hitler, was an asset that the regime could not wield. But there it was.

The candidacy was ready at the end of November, when Madrid was trying to outline a project with just one built facility: the Las Ventas bullring! As much as the project did not indicate which sports the bullfighting arena would end up hosting. The construction of an Olympic stadium for 100,000 spectators was planned in the University City, together with a pavilion and a velodrome. The aquatic activities would be held in the San Juan reservoir, with San Martín de Valdeiglesias as the sub-venue. Barcelona remained as the venue for sailing.

Despite its lack of realism, the COE chose the Madrid candidacy, causing the discomfort of the Catalan representatives and what could have been a schism in Spanish sport that was not silenced by the press. In January 1966, Pau Negre, president of the Spanish Hockey Federation and member of the Committee, published a revealing open letter in Mundo Deportivo after resigning from his position.

“I have always considered that the mixture of politics and sport is harmful for both activities and it deeply hurts me that situations like the present one are created without reason in which Barcelona and Catalan sport have suffered the 'Olympic contempt' that the voice of their representatives have not been able to be heard or their arguments have been taken into account”, he pointed out without hesitation.

Madrid's candidacy was so weak that it obtained the worst technical qualification of the four that had been presented to host those Games, including those of Montreal and Detroit, who attended the election knowing they were losers due to the unwritten law of the International Olympic Committee of rotation of continents.

But that the Spanish was a clearly losing bet was evident long before the vote for the Olympic venue on April 26, 1966 in Rome. The Mayor's Office of Madrid hesitated about the impossibility of undertaking the infrastructures committed by the COE and the regime, which saw what could come upon it, did not come to the aid. In fact, Elola-Olaso was practically alone in exposing his defense and the Games were neither for Barcelona nor for Madrid.

“In my first words, on behalf of the Spanish Olympic Committee, I would like to give a cordial welcome to all those who, from distant or nearby countries, have come to share a few days of work that I hope will be fruitful.

”And, together with the welcome greeting, my thanks to the head of state and caudillo of Spain, who honors us with his presence at this inaugural act, to the ministers who accompany him, to the ambassadors and to the international and Spanish press.

”The International Olympic Committee deserves our special recognition for having chosen Madrid as the setting to celebrate this 63rd Plenary Session. I give voice to the people of Madrid to express their deep gratitude, guaranteed by the presence of the Mayor of the Spanish capital, who has supported us so much.

”This is not the first time that the IOC has designated a Spanish city as the venue for a plenary session. In 1931, Barcelona was chosen for this purpose, although that meeting, for reasons unrelated to the Spanish Olympic Committee, could not have a normal development.

”Already in 1900, Spain participated in the Olympic Games in Paris. Shortly after, Spanish representatives were admitted to the International Olympic Committee. In 1920, in Antwerp, Spain obtained its first medals. In 1924 the Spanish Olympic Committee was established, with the Baron of Güell as its first president.

”Spain has thus been present at the Games and meetings of the IOC and has given its points of view. However, it must be recognized that our nation has not really been a prominent participant in the Olympics.

”In recent years, our country has become intensely and widely concerned with the values ​​of social renewal that the Olympic movement implies. In addition to greater participation in the Games and its contributions to the Olympic ideal, Spain has understood the importance of noble sports ideas and their integration into educational programs with well-structured physical education.

”In December 1961, a physical education law was enacted that encourages, organizes and regulates the practice of this discipline and recognizes the personality and independence of the Spanish Olympic Committee, regulating its activities and at the same time establishing the protection of the Olympic modalities.

”This law has allowed the development of a ten-year sports infrastructure plan, which will be a legacy for future generations. The works already carried out when the first four years have not yet been completed augur a good future.

”I have taken the liberty of outlining these ideas before the illustrious members of the International Olympic Committee because they inspire the concern of a nation where the social phenomenon of sport penetrates, among other reasons, to compensate for the automatism and sedentary lifestyle of life in large cities and large industrial centers.

”All this is in keeping with the genuine spirit of the Baron de Coubertin, for whom the Olympic event, the great festival of youth, was only the touchstone, the awakening of a collective conscience towards the rejuvenating practice of sport.

”I remember his own words: ‘In the turbulent hours that are approaching, it matters more than anything else to endow the adult with a remarkable physical and mental balance. He will be the most effective and decisive force of civilization, born of our efforts and those of our predecessors.

”In all the writings of the founder of the modern Olympic Games we always find the idea of ​​a social pedagogy. It is important to take into account these guidelines that promote major sporting events when they determine large currents of practice and incorporation of sport into customary life. Sport, nobly performed, means balance and ennobles the mind and body.

“Welcome to the champion if he inspires a crowd of active admirers and not just a passive crowd of town criers. This is increasingly important at the present time, where the celebration of the Olympic Games is constantly growing. Increase the number of participants and funding. Rome prevailed over the previous cities. Tokyo was the worthy emulator of Rome. Mexico aspires to overcome them.

”This is the symptom of the growing prestige of the Olympic movement. In the 20th century, despite two world wars, Olympism advances fearlessly, progressively, more and more vigorously.

”Avery Brundage, our president, in his opening speech at the 60th Plenary Session, was already showing us the right way: 'Countries concerned about too low an Olympic position should take care to establish adequate foundations for their educational system and not limit exclusively their efforts in the championships. The goal must be to form a vigorous and healthy youth.

”This is the way forward, although at the same time it might be convenient to review the evaluation system in Olympic competitions, so that the vast majority of countries that attend the call for participation cannot be misplaced by the current system, which only highlights the Super champions. On this, we will formulate a concrete proposal.

”There is no critical accent in these words, but only a desire for perfection. We love the work and the Olympic ideals because they seek the harmonious formation of man and also stimulate friendship and peace between peoples. That is why today we are very happy to welcome you as emissaries not only of sport, but also of the noble ideals that Olympism represents.

”We wish you a very happy stay with us and we hope that this meeting will be the harbinger that, at a not too distant future point, we will be able to welcome you back here, at a youth festival, at an Olympic Games for which Spain is preparing with the desire to contribute a plus to the Olympic movement. ”