A Navy report concluded that commanders, crew members, and others were responsible for the July 2020 arson attack that resulted in the destruction of the USS Bonhomme Rich Richard. It called the five-day fire in San Diego preventable, and unacceptable. 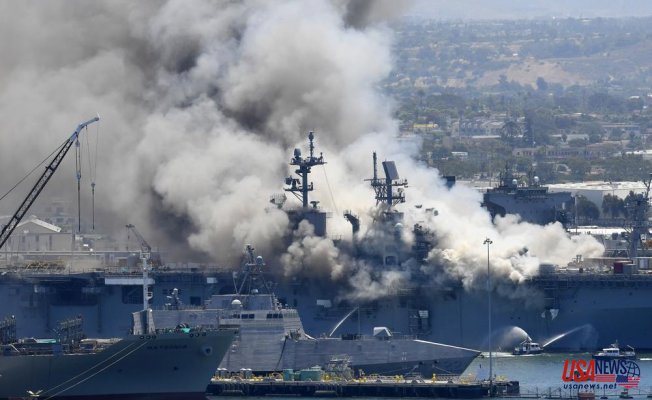 One sailor was charged with lighting the fire. However, The Associated Press obtained a more than 400-page report that lists the failures of three dozen officers or sailors who either contributed to or directly caused the ship's destruction. These findings revealed widespread failures in training coordination, communication, fire readiness, equipment maintenance, and overall command and management.

"Although the fire started by arson, the ship was destroyed due to inability to extinguish it," the report stated. It concluded that repeated failures by an "inadequately trained crew" resulted in "an ineffective fire response."

The commanders of the amphibious attack ship were criticized for their poor oversight. It stated that the main firefighting foam system was not used because it wasn't maintained properly or the crew didn’t know how it worked.

According to the report, the ship was in disarray with combustible material stacked, scattered, and stored incorrectly. The report stated that maintenance reports had been falsified and that 87% were not inspected or had equipment problems.

The report also revealed that crew members didn't ring the bells to alert sailors that there was an emergency until 10 minutes later. The report stated that crews took too long to put on fire gear and assemble hose teams, and it caused delays in responding to the fire.

The button that activated the foam firefighting system was not pushed by Sailors, despite it being accessible. This could have slowed down the progress of the fire. The report stated that no member of the crew was aware of the function or location of the button.

This report lays blame on a broad range of ranks and responsibilities. It includes Vice Adm. Richard Brown, the retired three-star admiral, who led Naval Surface Force Pacific Fleet. Senior commanders, petty officer, lieutenants, and civilian program managers are all included. 17 people were listed for failings that "directly" contributed to the loss. 17 others were also cited. Two sailors were also criticized for failing to help the firefighter.

Adm. William Lescher has been designated as the vice chief naval operations and commander of U.S. Pacific Fleet. He will handle all disciplinary actions against military personnel. It is not known if any military personnel have been removed or relieved from their jobs due to the fire.

Thoroman's execution of duties "created an environment of poor maintenance, training and operational standards that directly led the loss of the vessel," said the report. It also stated that Ray, Hernandez, and Capt. David Hart, the Southwest Regional Maintenance Center commander, also failed to fulfill their responsibilities. This directly contributed to the loss.

Only senior naval officers were named in the report. Others were only described by their rank or job.

The crew was also criticized for failing to perform drills, a lack of crew participation, a lack of basic knowledge about firefighting, and inability coordinate with civilian firefighters.

When the fire broke out, the ship was in San Diego undergoing a $250 million two-year upgrade. Nearly 60 sailors sustained minor injuries, heat exhaustion, smoke inhalation, and were among the 138 who were aboard. In some places, temperatures reached 1,200 F. This caused melting of sections of the ship and molten metal to flow into other areas of the ship.

The Navy took the ship out of service in April because of the damage. Ryan Mays, Seaman Apprentice, was charged in August with aggravated arson as well as the willful hazarding a vessel. He denied setting the fire.

According to court documents, the blaze started in the lower storage area. Mays' duty station had direct access to it. Investigators discovered evidence of tampering at three of the four fire stations aboard the ship, including the discovery of disconnected fire hoses and high-flammable liquid near the ignition point.

The report stated that efforts to extinguish the fire were hindered by the inability of the ship's crew, other fire departments and organizations, and not being able to communicate effectively, had not exercised together, and were not well-trained.

The Navy also conducted an historical study on Navy ship fires. The study found that 15 shipboard fires occurred over a period of 12 years. It also identified recurring patterns, such as failures to follow fire prevention, detection, and response policies. The Navy has taken other measures to improve safety.