Music and tears: the three tenors at the Camp Nou

It is a night of emotions on the surface. 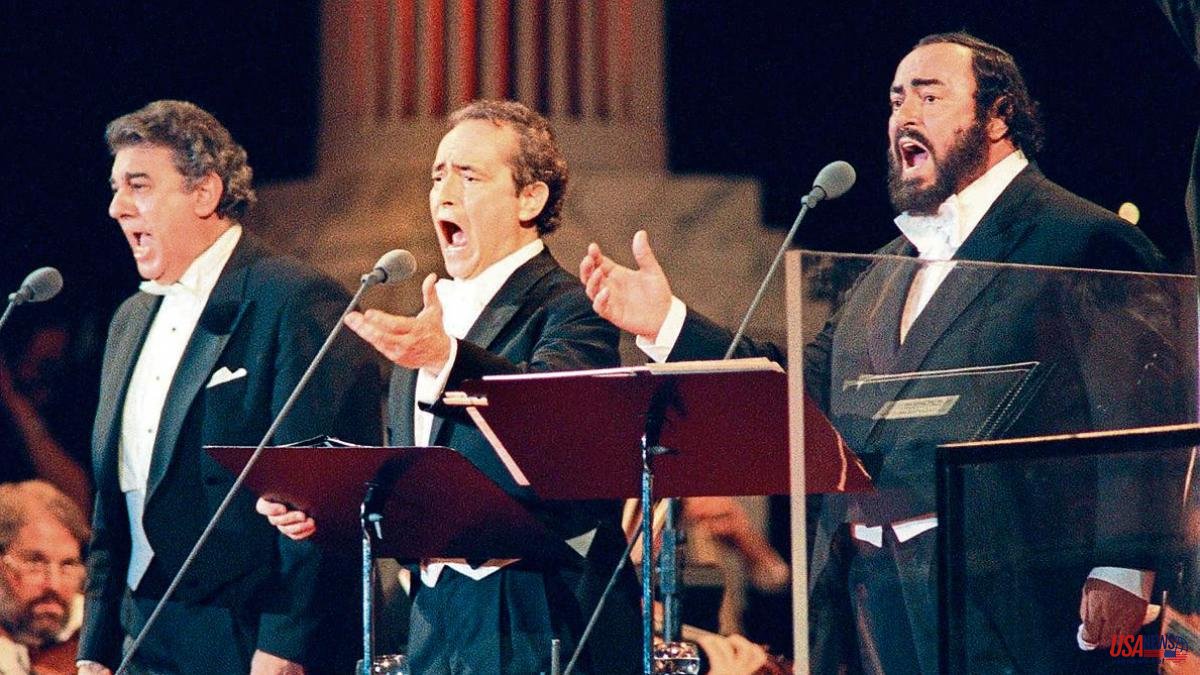 It is a night of emotions on the surface. The Three Tenors meet at the Camp Nou on the same day that ETA fulfilled its threat and shot Miguel Ángel Blanco twice in the head. The public already packs the premises when it is known that the doctors have not been able to save the life of the mayor of the PP. Blue ribbons give way to black ones on the large screens located on both sides of the stage. Luciano Pavarotti, Josep Carreras and Plácido Domingo appear. The Barcelona tenor announces that the concert is for the victim and his family, and the 65,000 attendees observe three minutes of silence. The effect could not match even a thousand hours of singing.

"I remember very well. They were days of anguish, pending the threat of ETA. Three days in which silence and sincere and honest communion made you cry continuously. And seeing the three tenors there was, as a symbol, something very powerful”. It is explained by the artistic director of the Liceu, Víctor García de Gomar, who at that time was a teenager who had insisted on being able to go to the concert.

“In the end we were the whole family, including my grandparents. That was the echo of the mythical Caracalla concert that had democratized opera. And the context aroused very special and unrepeatable emotions: music as a message of harmony and hope”, he adds.

The pain of that overwhelming kidnapping and murder announced by ETA found its emotional spigot in one of the rare and extraordinary concerts given between 1990 and 2005, which ended up giving a name to a brand: Los Tres Tenores, the equivalent of the three best in any discipline, the three tenors of medicine, the three tenors of architecture... In total they gave 33 concerts, a couple per year. And the Camp Nou was perhaps the largest venue. They were accompanied by the London Philharmonia Orchestra conducted by James Levine.

“The situation was in itself exceptional: three of the ten best tenors in the history of opera were meeting –recalls promoter Martín Pérez, organizer of those events–. They were contemporaries and they were in the best of their careers, so their agenda was bulky, they had more than a hundred concerts a year each. Making calculations in 16 years they came to sing about 1,700 times and only 33 of them did it together. Because indeed three great ones met. It was not a group but the sum of three personalities, something out of the ordinary”.

One of the things that made them excited, Martín Pérez points out, was singing with the trio in their respective cities. They did it in Modena, where Pavarotti was born and died; at the Camp Nou, which for Carreras, a Barcelona fan by roots, was an added illusion: it was his city and his stadium. And finally, at the Teatro Real in Madrid.

“I experienced that concert in a very different way, because for me, singing at the Camp Nou was like singing at home. And that made it very exciting, ”says Carreras to questions from La Vanguardia. “It was a special concert for all the circumstances that surrounded it. The three different voices on stage created a chemistry that openly reached the audience.”

Indeed, they were singers of the same chord, one lyrical, another lighter, at times spinto, and the one from Madrid on the dramatic side. Still, they shared repertoire roles and knew of each other's strengths and weaknesses. Their show responded to a precise script: they began with songs and arias from lesser-known operas and rose with the really popular ones: “La donna é mobile”, from Verdi's Rigoletto, “Nessum dorma”, from Puccini's Turandot...

But what aroused passions were the famous medleys that they saved for last. Potpourris that served them to link some melodies with others, passing them from voice to voice. To join in a sharp ending. And just as in other countries and continents they tried to interpret something from the place, at the Camp Nou they concluded with L'emigrant , with Domingo and Pavarotti singing in Catalan.

“The artistic experience we had was extraordinary. We were not aware of the magnitude that this concert would have, but there is no doubt about the emotion with which we experienced it. We reached an audience less familiar with opera and that was always a source of joy”, recalls Carreras. The Barcelona tenor was the architect of the union. It was as a result of his epic recovery from leukemia that he proposed to his colleagues that they join his return to the scene.

Pavarotti resisted for a couple of years, until in 1990 they were proposed to close the World Cup in Italy, at the Baths of Caracalla, directed by Zubin Mehta. It would not be the only World Cup they would do: they would be followed by the United States, in 1994, Paris in 1998 and South Korea and Japan in 2002. The Dodgers baseball stadium in Los Angeles sold eight million copies on CD and DVD. A genre was born: classic pop.