The second electoral debate that faced the six candidates for the presidency of Andalusia on the sets of Canal Sur has not brought any news with respect to the first of them, which took place last Monday on TVE. 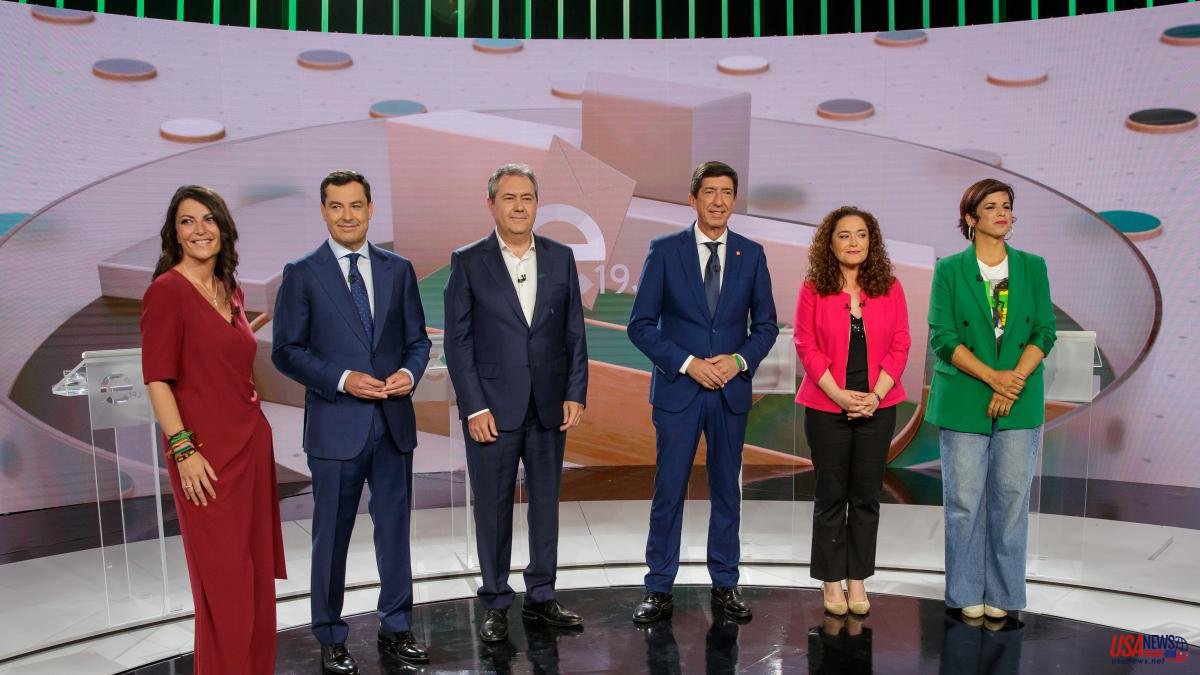 The second electoral debate that faced the six candidates for the presidency of Andalusia on the sets of Canal Sur has not brought any news with respect to the first of them, which took place last Monday on TVE. All the candidates for the presidency of the Board have maintained the same strategy of the previous meeting, although it has been Inmaculada Nieto, from Por Andalucía, who has been a little more belligerent with the acting President of the Government.

The big question that voters are asking themselves about what type of government will come out of the appointment with the polls next Sunday has been, once again, suspended in the air. Juanma Moreno, leader of the PP-A and whom the polls point to as the great winner of the electoral night of 19-J, has not cleared up the great unknown: will he or will he not be willing to agree with the party of Macarena Olona (Vox)? What he has assured is that he would like to reissue the government with Citizens, although it remains to be seen what representation the orange formation will obtain after the vote count. In the event that the sum does not grant him that necessary majority, he would be condemned to come to an understanding with those of Abascal, who has snapped "lack of experience in management" and "ignorance" of this land. "You want to enter a government you don't believe in," he has said.

Despite the constant allusions that Vox has made to Moreno to force an answer, the man from Malaga has remained firm, also avoiding the rest of the formations that threw him the same question. Only Juan Marín (Cs) has refrained from issuing any criticism, becoming, one more debate, the parapet of the president.

The voters, who had the perception that the previous meeting had been 'weak', expected something new in 'The Decisive Debate', although during the almost two hours of duration of the meeting there have been no big surprises, except for some joke about the torrijas that Marín makes or the one launched by the socialist Juan Espadas when he has commented that perhaps he should dress up as a cow so that Moreno answers some of the questions that he has raised (alluding to the photograph that the popular one took with one of these animals campaigning to show support for the livestock sector).

However, the pace, tone and tactics have not changed from set to set. Juanma Moreno has remained moderate, ignoring all the attacks made on her management, while Juan Marín, representative of Cs, has adhered to his speech, criticizing, yes, the interventions of the rest of the candidates, especially the of Swords. For his part, the Sevillian socialist has attacked the President of the Government of the Junta from the first minute, insisting that his approach to Vox is not convenient for the South; glove that he has been picked up by Olona to harass Moreno and encourage him to let the Andalusians know if there will be an agreement or not with his formation.

The confluence of Inmaculada Nieto (Por Andalucía) does seem to have minimally altered her staging, showing herself somewhat more belligerent with the popular one and confronting Abascal's at specific moments, while the candidate for Adelante Andalucía, Teresa Rodríguez has continued with the same line that he defended last Monday: program, program, program, being, together with Nieto, the one that has made the most political proposals in this debate.

Macarena Olona, ​​who was expected to generate some controversy, as she did in the previous meeting, has been reduced to the background. Her spotlights have focused on her when she has stated that she will "forgive" Moreno for some of the things "that she has said during the campaign" as well as that she will "reach out" to form a government if necessary. "My support or my abstention will only be given if Vox is part" of the Executive, she has advanced.

The leader of the popular Andalusians, for his part, who during the first televised debate built a bridge to Alicante, has chosen to distance himself from the far-right formation, although without completely ruling it out in a hypothetical government. “My alliance is with the Andalusians”, he has insisted, since he has indicated that his party will represent and welcome all those with different “feelings”. “Have your debate and let me have mine”, he replied to Olona, ​​“we are two different parties”, while suggesting that “to maintain or defend your ideas it is not necessary to project a bad image of Andalusia, it is not necessary to attack the Andalusians, which is a serene and sensible land”.

Juan Marín, leader of the orange formation, has insisted on his message: he will prevent Vox from reaching the Board in every way possible. The man from Cadiz, who has once again battled against Olona and against Espadas, has insisted that only his and his team are capable of stopping the advance of the extreme right, insisting that the vote for Cs is the "useful vote".

Espadas, for whom the polls do not predict a good result, has once again confronted the right, delving into the idea that a new Moreno government, which he assumes will end up agreeing with Vox, would set the region back. Given this, the mobilization of the electorate is the "only" thing that can save socialism.

For her part, Inmaculada Nieto (For Andalusia), has been convinced that this weekend there has been a change in trend among progressive voters (as a result of the participation of the Minister of Labor, Yolanda Díaz, in her campaign ) as well as that there will be a "growing mobilization" on 19-J, La Cadiz was calm but firm in her claims.

Teresa Rodríguez has insisted on the need for the future of the community to be assumed by an Andalusian group that works solely for the well-being of the region and without having to render accounts to Madrid to be able to execute the projects and initiatives that add up here.

The health system, education and social policies were part of one of the blocks to be discussed in this pre-election meeting. While the two members of the Government, Moreno and Marín, made a good balance of the management carried out despite the crisis unleashed by the covid, the left has questioned the progress of those who "boast". “His government is a great monument to nothingness,” Nieto criticized him every time he pointed out that “there has been a significant deterioration in public services that have harmed many families,” he pointed out.

The ratio in the educational classrooms, the non-approval of a bioclimatization law in the centers or the long waits in primary care and in diagnostic tests have been the x-ray made by Rodríguez in this matter.

For his part, Juan Espadas has insisted that all the new infrastructures that have been undertaken during this legislature have been possible thanks to the funds managed by Pedro Sánchez, president of the central government.

Moreno has avoided talking about gender violence (an issue addressed by Swords) and climate change, as well as the possibility of generating 'green' jobs in rural areas to prevent 'empty Andalusia' from continuing to occur in the region, according to Rodriguez warned.

Economy, employment and taxation was the second thematic block of the debate. While the right wing continues to bet on a massive tax cut, the progressives emphasize that with this "fiscal gift", as the Adelante Andalucía candidate has defined the fiscal measures put in place by PP-Cs, "they do not help the working class ”, since he has pointed out that it harms public services by remaining in the hands of private entities.

For its part, the coalition has defended that with these measures it has been possible to "reactivate" the economy and that Andalusia "continues to advance" on the path "of prosperity", it pointed out. Again, the unemployment data figures have been throwing weapons from one side and the other.

If Espadas warned that the advances in terms of employment have been thanks to Madrid's socialist policies, Inmaculada Nieto did the same, attributing the credit to her colleague Yolanda Díaz, Minister of Labor. "You make old policies, Mr. Moreno," she blurted out. Both theses have been used by Olona to encourage the electorate to vote, so that they "kick Sánchez in the butt" by opting for his ballot and advocating "real change."

Governance was the last topic proposed to the candidates for the Andalusian elections. Under this heading, in addition to talking about possible agreements, the issue of regional financing has been addressed, which has served, as happened in the previous meeting, to transfer this matter to the powers of the State and the attitude of each party with respect to to matter. Everyone agrees on something: Andalusia is poorly financed.

The use of the resources that has been made during this legislature has been questioned by the left, from where it has been pointed out that the regional government has not executed all the funds received, something that "they have presumed", Nieto criticized Moreno . "The future of Andalusia cannot be in his hands because he is a bad ruler," he indicated. The acting president did not take long to reply, alluding to Sánchez's "branch" in Seville and attributing an "unfair" distribution of funds to this region by the socialist leader. “Andalusia is poorly financed”, commented Moreno Bonilla, “and I will always defend Andalusians” before the central government, regardless of the color that prevails in Moncloa, to reverse this situation. “I am the only one, except Teresa, who does not have guardianship” in the Spanish capital, he continued, “nobody from Madrid tells me what I have to do”.

"Here the thing is going blocks," said Inmaculada Nieto, who anticipated that her formation would be willing to form a "progressive, useful and Andalusian" government with the rest of the parties with which it shares ideology. "If we vote for Andalusia, if you don't fail (in terms of participation), I'm not going to fail", she finished her intervention.

Teresa Rodríguez called for the mobilization and the support of her party as "defense of the workers against the servility of the Madrid governments." "When the right advances, the towns go back", she pointed out, since she claimed that her formation does so for "Andalusia, in self-defense".

For his part, Olona ended the meeting insisting on the need to generate "real change" in the community. “You are the ones who have no other train to lose,” he said, while Juan Marín emphasized the idea that his formation is that of the “useful vote” to help re-edit the coalition with the PP and “avoid the mess” .

Moreno defended his management and highlighted the "ambition" of his party, a "team with experience and filming" to "keep moving forward" while arguing that under its acronym "everyone has their space."

The socialist Espadas, who has been in charge of putting the finishing touch to the meeting, addressed his last words “especially to the progressives who did not go to vote in 2018: We are the alternative to stop the pact that is being incubated here between PP and Vox, but we can only do it with your vote. If we vote, we win”, he finished it.