Moreno Bonilla and the triumph of fantasy literature

The most exact explanation of the resounding electoral victory of Moreno Bonilla in Andalusia was announced in advance, one day in September 2013, speaking of something else, by Ricardo Piglia –also known as Emilio Renzi– in his (television) dissertations on the stories of Borges. 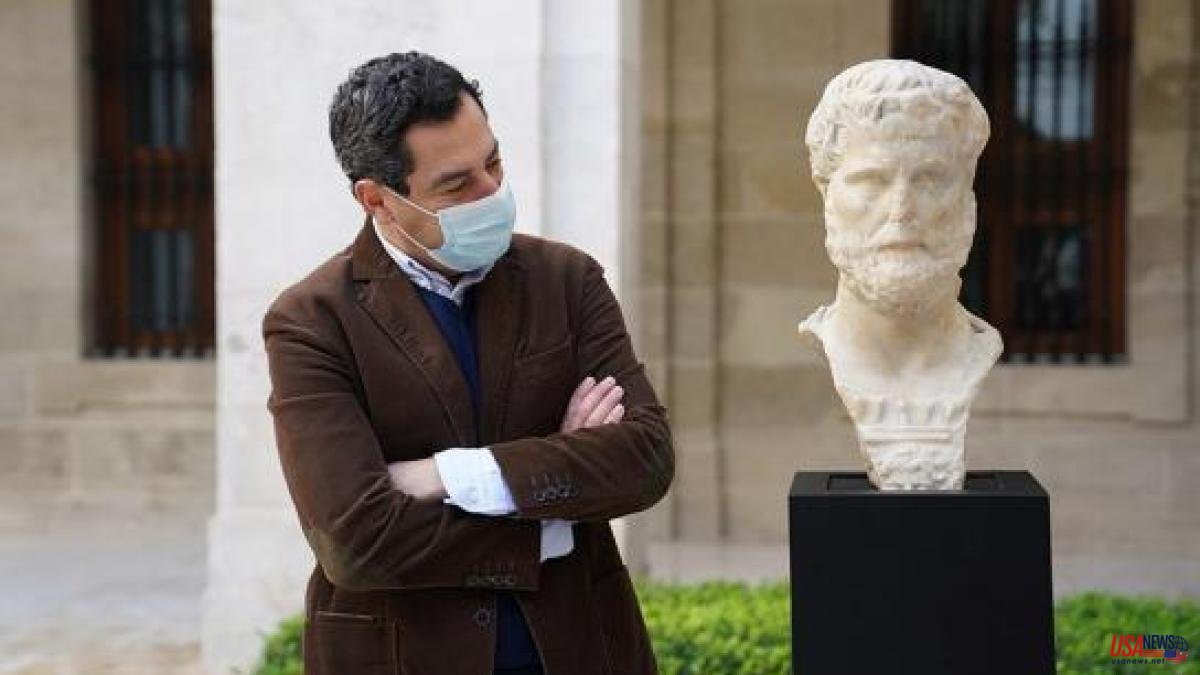 The most exact explanation of the resounding electoral victory of Moreno Bonilla in Andalusia was announced in advance, one day in September 2013, speaking of something else, by Ricardo Piglia –also known as Emilio Renzi– in his (television) dissertations on the stories of Borges. “The problem”, explained the Argentine writer, “is not how reality is in fiction, which is what is generally sought: how a novel represents an era. More than seeing how reality is in fiction, the issue is to see how fiction is in reality. How does fiction act in reality? Where do we look for fiction in reality?

Gramsci gave the miracle of verisimilitude a name: hegemony. “You cannot govern through coercion, fictitious forces are needed”, Valery wrote to express the same thing: true power is not material, but figurative. Imaginary, first; actual, later. Mandar requires creating an illusion. Set up a story. Establish an effective narrative. This has been the true success of the President of the Board, who in three and a half years has transformed a carambola –he arrived at the Palacio de San Telmo (Quirinale) thanks to a succession of random circumstances– into the epic of the southern right, which in Forty years of history, only on one previous occasion did it manage to be the most voted list in the great autonomy of the South.

Javier Arenas, the pioneer, drowned on the banks of the Guadalquivir. It was in 2012. His fifty deputies did not allow him to govern. Moreno Bonilla obtained this Sunday eight more than his predecessor –we ignore the period in which the PP was led by Zoido, which returned it to irrelevance– and a total of 831,634 new votes in relation to 2018, until reaching the magic figure of 1,582. 412 votes (43%). A rise of 22.3 points that guarantees a government of the right in Andalusia for a long time cycle.

How was such a miracle possible? What has happened to produce this (apparent) social right-wing? A serious analysis must start from the facts and move away from the assumptions projected by part of the Madrid press, obsessed with making mechanical readings of what happens in Andalusia in the context of national politics, driven by desires (sometimes partisans) That has nothing to do with the true data.

The 19J has a state key reading. This is indubitable. Andalusia feeds the thesis of a large-scale political overturn. But this phenomenon does not happen because the South is a mimetic reflection of what is going to happen at the national level. It happens because political events are anticipated, earlier than in other territories, in southern Spain. Podemos began to stagnate in Andalusia before Madrid; Vox broke into the institutions, where it now seems to have reached its ceiling, in the Parliament of the Five Wounds. The return to bipartisanship (ma non troppo) also seems to have its symphonic prelude in Andalusia.

The South, however, is not a political laboratory. It has its own social characteristics. That in the end they end up creating a trend is a supervening fact, more than expected. The spectacular victory of the popular candidate, a transitional leader for whom three years ago no one was betting, not even in his party, and who had become a verse without possible rhyme after the fall of Rajoy, has little or nothing to do with the management of the government PP-Cs.

The proof is that the orange party has become extra-parliamentary after having controlled half of the regional budget, a true source of real power in the South of Spain. Moreno Bonilla has not triumphed electorally because he is a good manager. Nor is his promotion due to the drive for far-reaching political reforms. His project is based more on the intelligent impersonation of the historical PSOE than on the existence of its own model. His is a change (no change). A reformism enunciated but –until now– never executed.

In a sense, his victory has a conservative meaning, but in a reverse sense from the conventional one. Southern dimension: in southern Spain nothing is completely as it seems, without at the same time ceasing to be. Contrary to what has been repeated these days, fear is a substantial part of the complex political equation in Andalusia. But what is really important is that all the traditional political actors, trying to seduce the body of voters, have changed their position, thus altering the usual references.

Moreno Bonilla has not touched the structure inherited from the Junta de Andalucía that created the PSOE. He has not improved education either. Its investment in health – a very sensitive issue in political terms – has only reached the levels prior to the cuts made by the Socialists since 2009. San Telmo continues to spend little on public services. Andalusia does not now have a better rate of convergence with Europe nor is it experiencing an economic miracle.

Everything is simpler: it is based on the infinite power of the fable. The President of the Board, who was invested in 2018 thanks to the votes of Cs and Vox, has created a much more effective narrative of himself compared to the self-portrait of his previous parliamentary partners – whom he no longer needs – and by reflection of their opponents. His argument is the aggiornamento. A gatopardismo that has little of mephistophelian, although it expresses the pragmatism of the southern right to make everything seem different without changing anything substantial.

The story, without a doubt, has given an excellent result in partisan terms –which is not the same as political– but it has costs (for Andalusians) and, despite the fact that the 19J electoral photo is in color, it does not have guarantees full of lasting in the long term, although the new conservative momentum in Andalusia was far from being a passing event. Moreno Bonilla has swept away without great management achievements. That is the great Andalusian mystery.

His strategy of moderation –the favorite word of the president-elect–, the centrist profile and the acceptance of lukewarm Andalusianism by the PP, whose brand has been sacrificed to the greater glory of the leader, contributed to giving this fable the required credibility. The origins of this metamorphosis date back to 2007 with the reform of the Andalusian Statute. At that moment the conservatives of the South replaced their secular lack of enthusiasm with autonomy for their defense. Since then the wind, although rhythmic, has blown in his favor thanks to factors that were not part of the political equation and now condition it. One of them is fear. As the old slogan of Podemos de Vistalegre I said, it has changed sides.

The PP, classic representation of the southern right, is no longer the one who causes fear or unease among voters. The consolidation of Vox, as a spin-off of the conservative party, has centered Moreno's party without making much effort, without having to change its views and without elaborating any remarkable strategy, except for the plan to replace the PSOE as the new institutional strength of southern autonomy.

Of the 22 points of electoral promotion that the president of the Board has achieved on 19J, a not insignificant part comes from his former voters who supported the ultramontane and have returned home. They also come from Cs, de facto absorbed by the PP. But, above all, they are PSOE voters, who between fright (PP) and death (Vox) have opted for the first option. It is not that the left has not mobilized this June in Andalusia. It is that he has done it for the benefit of Moreno Bonilla, turning him into the César de la Bética.

The great coalition, which Moncloa never wanted to try in the South, was de facto consummated last Sunday at the polls, although it does not have an express institutional manifestation. The psychological situation with which the PP came to power in Andalusia has contributed to the transfer of votes to a remarkable degree: unexpectedly, unstable and uncertain. This temporary way of occupying San Telmo made the government of Moreno Bonilla, like Christianity, see the way: replace Rome by anchoring itself on the foundations of its ruins.

Insecurity (mental) vaccinated the PP against one of the greatest sins of the socialists after 36 years of hegemony: pride. Blindness and deafness (without cost) was chronic in the face of citizen demands. Moreno, on the other hand, has wanted not to displease anyone, which is not necessarily a virtue. He was inoculated against the evils of excessive confidence with doses of social receptivity. So he decided to write a kind story, without edges and without edge. The PP is not going to keep the Board until 2026 for having promoted a great change, but rather the opposite: leaving things as they found them. Without taking any kind of risk.

Its differential element, more than real, is virtual. His method: to create, based on the figure of the president –Juanma–, a fable (with a happy ending) that closely resembles a Disney movie. The truth of the story soon ceased to be verifiable. The main thing is that it was convincing. Unlike Arenas, Moreno does not cause rejection. He belongs to the third generation of a lineage that has taken decades to rule in Andalusia.

The Chairman of the Board is 52 years old and his message, without being disruptive, does represent a certain innovation within the mental framework of the southern right: economic liberalism, conciliatory messages, acceptance of feminism, cultivation of a popular profile, defense of environmentalism ( relative) and a neat, correct and non-aggressive parliamentarism that does not cause polarization, but adherence. He doesn't excite (except for his growing fans) but he doesn't repel. Voting for the president of the Board is not perceived –among the left– as a class betrayal.

It is enough to compare the ecumenical profile of Moreno Bonilla with that of Juan Espadas – 55 years old – to realize what the substratum of the PP's victory is. Moreno speaks for conservative voters who consider themselves children of his time. He defends Andalusianism and ecology. He makes gestures that suggest the modernization of the PP in the South. He insists on his will to walk at the same pace as society. Swords, on the other hand, replicates the traditional discourse of the old patriarchs of the PSOE, elaborated by a generation that is close to eighty years old. And he does it through courts such as town halls or county councils. He just like a retired Moses.

The PSOE candidate speaks of 28F. He evokes the conquest of self-government. He insists on the glory of the yellow time in which PP was directed by Hernández Mancha, Gabino Puche, Teófila Martínez, Arenas and Zoido. They are all part of the past. He stirs up the bitter memory of the civil war and warns about the danger of the extreme right. Moreno and the Andalusian head of the PSOE are contemporary and, in many respects, similar. Both practice the (political) codes of fantasy literature. But one writes science fiction and the other, gothic fables.