The reactions on the street in Russia have not been long in coming. 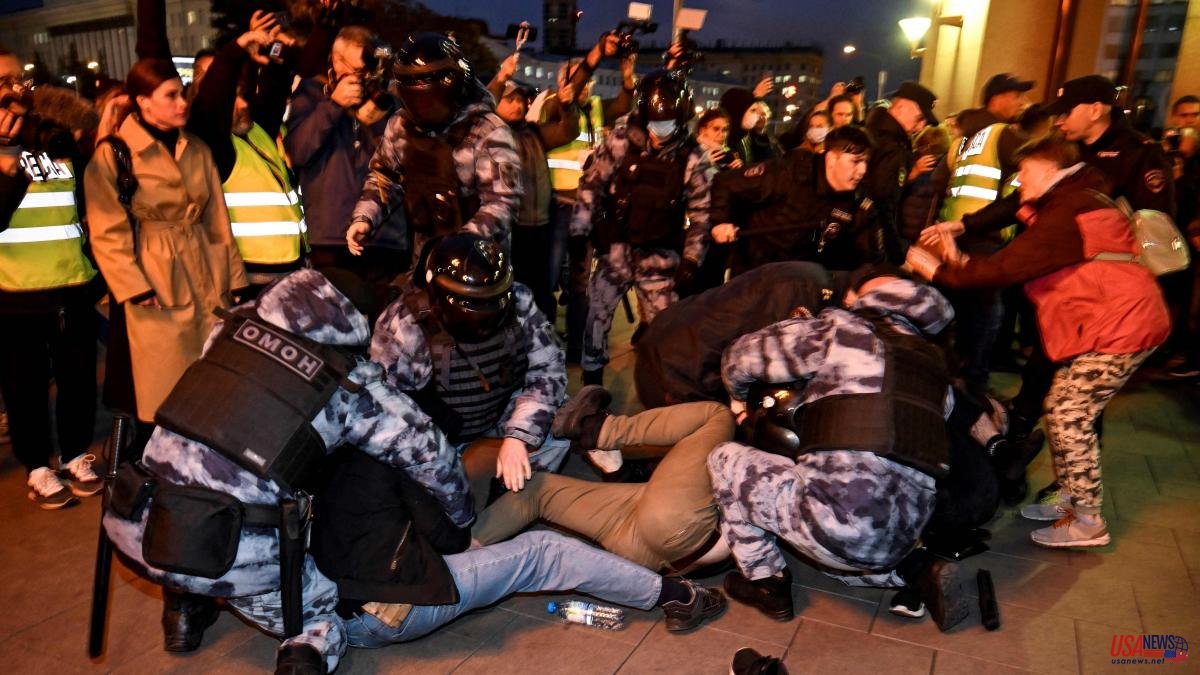 The reactions on the street in Russia have not been long in coming. Hours after Vladimir Putin's call-up of 300,000 Russian reservists to fight in the Ukraine war has sparked protests in several cities across the country. For now, the Russian security forces have arrested more than a thousand people (1,311) spread throughout the Russian geography, according to the Ovd-Info agency. The record of arrests is rising rapidly, only in Saint Petersburg there are already at least 502 detainees and in Moscow 524, being the two cities with the most arrests due to the demonstrations that cry "no to war" between applause and "Putin to the trench" .

This announcement contrasts with the televised statement that Putin made to the entire nation about a possible mobilization of the three reserve troops in the face of the escalation of the War in Ukraine. "I understand how you care about your loved ones... There will be no reservist conscription," he told her in a Women's Day message from the Kremlin.

Citizen mobilization has been promoted by the Vesná (Spring, in Russian) peace movement to prevent "fathers, brothers and husbands" from being sent to the "meat grinder of war". Demonstrations have been called for 7:00 p.m. today in the center of all Russian cities with a slogan that is both a play on words: "No to mobilization!" (mogila means tomb in Russian).

In the center of Moscow, where there were hundreds of protesters on Arbat Street, the arrests by riot police began as soon as the protest started, as the Efe agency was able to verify.

Those gathered shouted "no to war" to applause and "Putin to the trench." A demonstrator with a protest sign was immediately arrested by the officers, who took him away. Others chanted "the police are the shame of Russia." "Why are you doing this if tomorrow you are going to be sent to the war in Ukraine?" Some addressed the agents. "Die for what, holy of what?" They added.

Among the chants, "life for our children" could also be heard, referring to the declarations of the head of the Defense Committee of the Duma or Chamber of Deputies, Andrei Kartapolov, that the first mobilized will be reserve non-commissioned officers under 35 years of age. and officers under 45 years of age.

The citizens tried to create human chains to avoid arrests, while the police created cordons to prevent the passage of the protesters, who intend to go down Arbat Street until they reach the Ministry of Foreign Affairs. Shortly after, law enforcement began to clear the area and push protesters towards the beginning of the pedestrian street.

The President of the Government, Pedro Sánchez, has described the announcement made this Wednesday by Russian President Vladimir Putin of a "partial mobilization" that will affect some 300,000 reservists as a "flight forward" and has defended that in this new phase of the war that opens, unity is more necessary than ever.

"Putin has taken another step in the flight forward, making statements that are totally inadmissible," said Sánchez at the beginning of his speech at an economic forum in New York, where he is on the occasion of the General Assembly of the UN.

Following the televised speech by the Russian president, it has caused the demand for flights to skyrocket. The cost of tickets has multiplied and the offer of flights out of the country has been exhausted. The price of flights from Moscow to Istanbul or Dubai - only one way - has increased in a matter of minutes to reach 9,200 euros for an economy class fare.

Likewise, another fact that has not gone unnoticed by many users and the media is that after the intervention, Internet searches for questions such as "how to break an arm" or "how to leave Russia" have increased considerably.

Undoubtedly, some very significant questions that show the state of mind of many Russian citizens and that respond to a common goal: to avoid being one of the 300,000 reservists who will be called up.