Mo Katir catches the bronze in the 1,500 and breaks a wait of 23 years 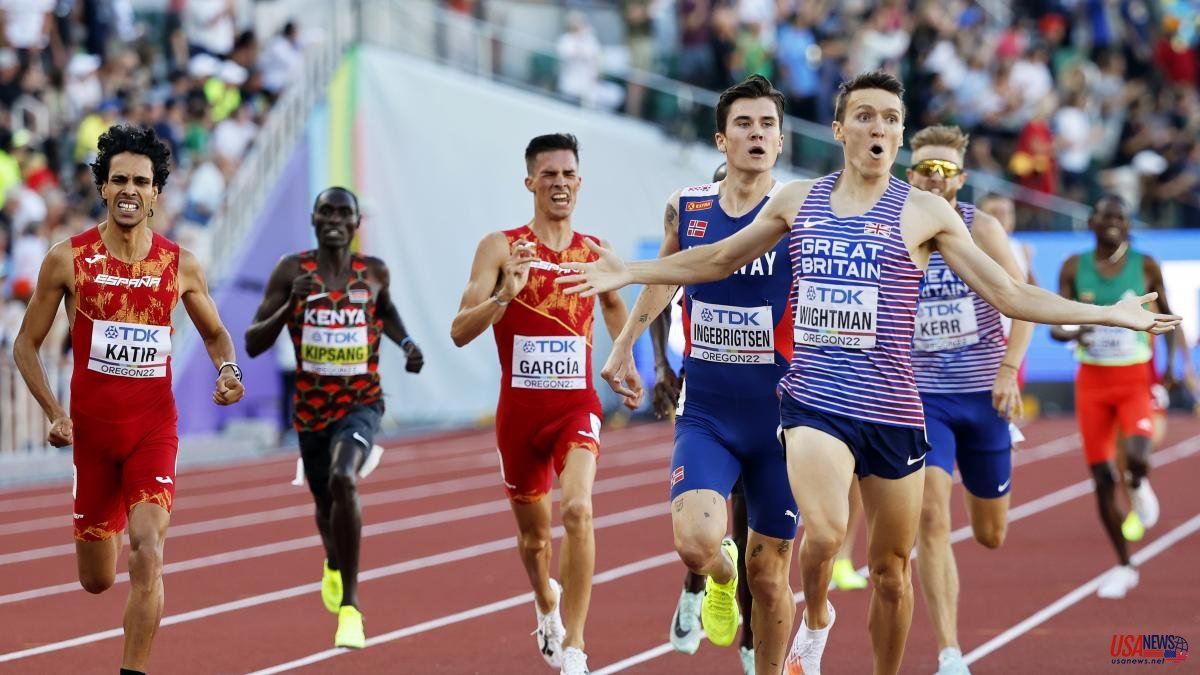 As he does in all major international events, the head of athletics summons groups of journalists and attends to them. This time he has summoned special Italian and Spanish envoys.

The chronicler cannot help it. Ask:

-You have been a double Olympic champion of 1,500 (Moscow '80 and Los Angeles '84). The Spanish have placed three men in the final. What do you think will happen?

-Well, Jakob Ingebrigtsen and Tim Cheruiyot are the strongest now. Both have shown to be in great physical and mental shape. But it all depends on how you race: you also have to count on the British, with Josh Kerr and my friend Jake Wightman. And the Spanish? Well, they have brought out a magnificent generation of young talent. With its president, Raúl Chapado, we have been talking about a return to the 80s and 90s.

Okay, let's get out of the reverie.

This is Eugene and this is the second decade of the 21st century.

And on the synthetic at Hayward Field, Abel Kipsang takes the lead and accelerates, and the group stretches like gum.

The race goes as predicted. It goes like a shot.

-I knew the race was going to turn out like this. I get on well with McSweyn (the Australian who also loves vertigo and finished ninth) and it was clear that he likes to get away with it. My brother always tells me that he is a free hare -said Mo Katir (24), a happy man in the bowels of the stadium.

There, at 800, Jakob Ingebrigtsen appears, hypothetical favorite, who accelerates even more, and those who cannot get on the bus melt.

Ignacio Fontes (24), the Spaniard who has fought so hard to be in Eugene, gives in and loses contact. Mario García Romo, the 23-year-old from Salamanca who went to study Chemistry at Ole Miss, in Mississippi, grits his teeth and stays in the fight.

-I saw the partials and thought: I see myself for 3m30s! -says García Romo, who hours before had been watching Gladiator, his favorite film, "because of the soundtrack and because the protagonist is from Emérita Augusta, and that place is very close to my Salamanca".

And Mo Katir, the talented Murcian who broke into the international showcase a year ago by breaking the Spanish records of 1,500 and 5,000, maneuvers.

-It was about going behind and reserving strength. If you are behind but close, you are in the group. I didn't want to tell anyone, but that had been my idea.

There is vertigo at the passage of a thousand: 2m19s.

Now Cheruiyot wants her place on the stage. He sides with Ingebrigtsen, and Sir Coe's friend Wightman also comes.

This is going to really hurt.

At the bell, Ingebrigtsen looks for another gear.

He is the Olympic champion, he is one of the stars of World Athletics, he is the protagonist of the project of Gjert Ingebrigtsen, the Norwegian visionary who had put his six children to run, to see what came of it, and it turns out that four middle-distance runners came out, and Jakob the best.

At 300m the Norwegian commands, and Cheruiyot is disfigured, and Wightman is seen, and Katir maneuvers.

The entry into the curve marks a change of third: Wightman wins the rope to Ingebrigtsen, who would have thought it, and five men fight when they appear on the straight.

Wightman endures, who takes the title in 3m29s23, an expensive title like in the times of El Guerruj or those of the initial Cheruiyot, withstands the pressure of Ingebrigtsen, uncomfortable silver for the guy who was looking for the double (3m29s47), and Katir wins a square, it opens onto lane three, it barely appears in the finish line photos, how good the finals are for him in the face of a dog, to catch a bronze, in 3m29s90: he arrives stuck, but everyone arrives like this, stuck.

-Fourth place is incredible. But I can still achieve something more. Cacho was an Olympic champion at the age of 23, and that is my goal -says García Romo-. With the team behind me, I can dream of it.

How long had it been since any Spaniard grabbed a world podium?

You have to go to Sevilla'99, Estevez's bronze.

-I have always been asked what I prefer, the records or the medals. Until now, I always said that the records. But now that I have this... -Katir says goodbye.