Mónica Oltra: Rise and fall of the greatest symbol of the Valencian Botanist

In 2011, a young Mónica Oltra appeared in a debate on Channel 9, the Valencian television, with a very explicit t-shirt: "Channel 9 manipulates". 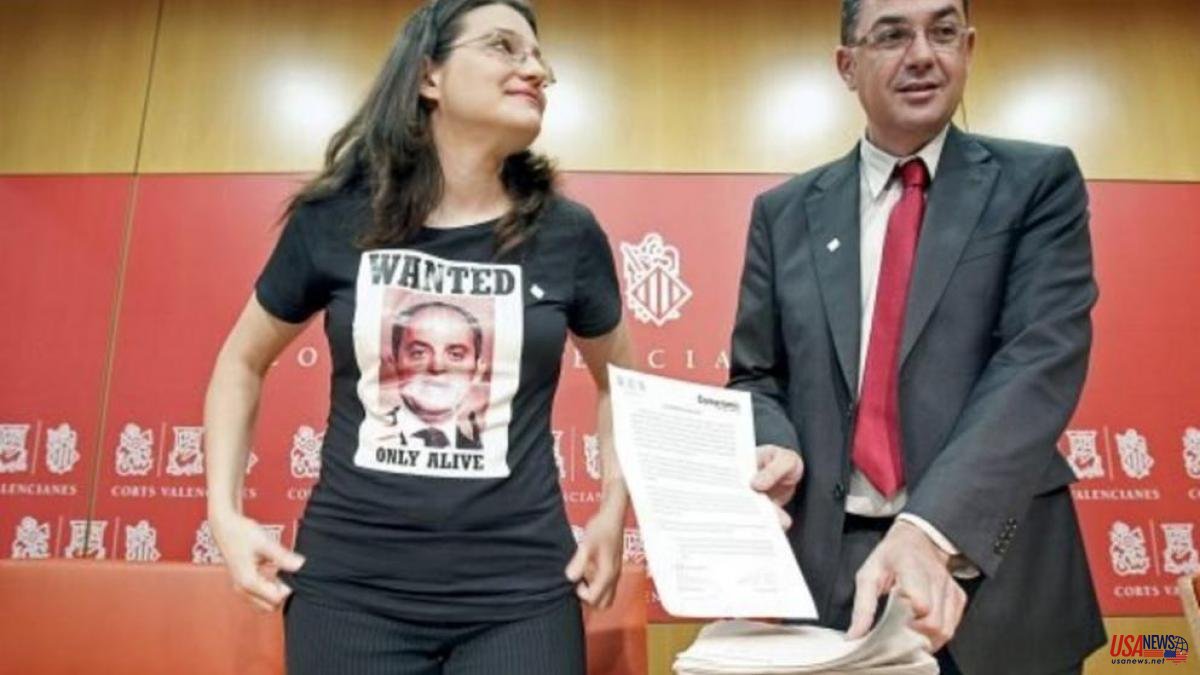 In 2011, a young Mónica Oltra appeared in a debate on Channel 9, the Valencian television, with a very explicit t-shirt: "Channel 9 manipulates". During that debate, they tell in Compromís that her Facebook page -then the networks were not such an important instrument in electoral campaigns- began to gain followers. It was useless and an accused Francisco Camps swept the elections with more than half of the votes.

Oltra's career was already beginning to emerge. The one on his t-shirts was called him. Famous was the one that, with a face of the former president of the PP, put "Wanted. Only alive", denouncing Camps' maneuvers to escape parliamentary control.

In 2015, Compromís gave a surprise and went from 6 to 19 deputies, making it easier for the PSPV, despite reaping the worst result in history, to be able to govern the Valencian Community again 20 years later.

The change cost. It was an arduous negotiation because Oltra understood that if Podemos wanted her to be president, the votes of Compromís and the purple ones (32) far exceeded those of the PSPV (23). But the socialists did not give their arm to twist and Ximo Puig was invested president of the Generalitat Valenciana. A government of two was formed with the parliamentary support of Podemos.

Of course, in exchange, the head of the Consell had to give in and Oltra took the stripes of vice president, spokesperson for the Consell while assuming a high-voltage portfolio such as Equality and Inclusive Policies.

A department that was gaining weight in the regional Executive with budget growth in each year and with important challenges such as dependency, changes in social services and the implementation of the ambitious Valencian equality income.

It has been precisely her management questioned by the courts in that portfolio - from which she has never wanted to part because she understood that she was in politics to do politics - that has ended up confirming her resignation.

Oltra's power in the executive was evident. A very clarifying phrase circulated among his collaborators in this regard: "Not everything that the vice-presenter wants is done, but nothing is done that she does not want."

This context was changing and in 2019 Ximo Puig, against the criteria of Compromís and the vote against the councilors of the coalition -the socialist leader had to use the quality vote of president- decided to advance the elections and join them to the general ones. To the Valencianists it seemed like a betrayal and, although after the elections they saved the furniture and were able to reissue the Botànic pact, that day something was broken.

The gap between Puig, who had gained stripes as one of the most important barons (if not the most important of Spanish socialism) and Oltra was growing. The pandemic also did not help with different opinions when facing the restrictions. To all this, every time a budget had to be agreed upon, the tension skyrocketed.

The relationship never recovered. Oltra made it clear today when he explained that already in 2019 she told Puig it was no longer the same and hinted that he, as president, had the power to dismiss her at some point. During his appearance this Tuesday, Oltra has assured that he was abandoning his charges to prevent his accusation from being "an alibi for the PSOE to remove the leftist policies from the Government." His resignation has been full of jabs at the president and the socialists.

In case there was any doubt, Oltra, asked if she had missed the president's support, pointed out that "there was no possibility that he would support me and I haven't expected anything for a long time."