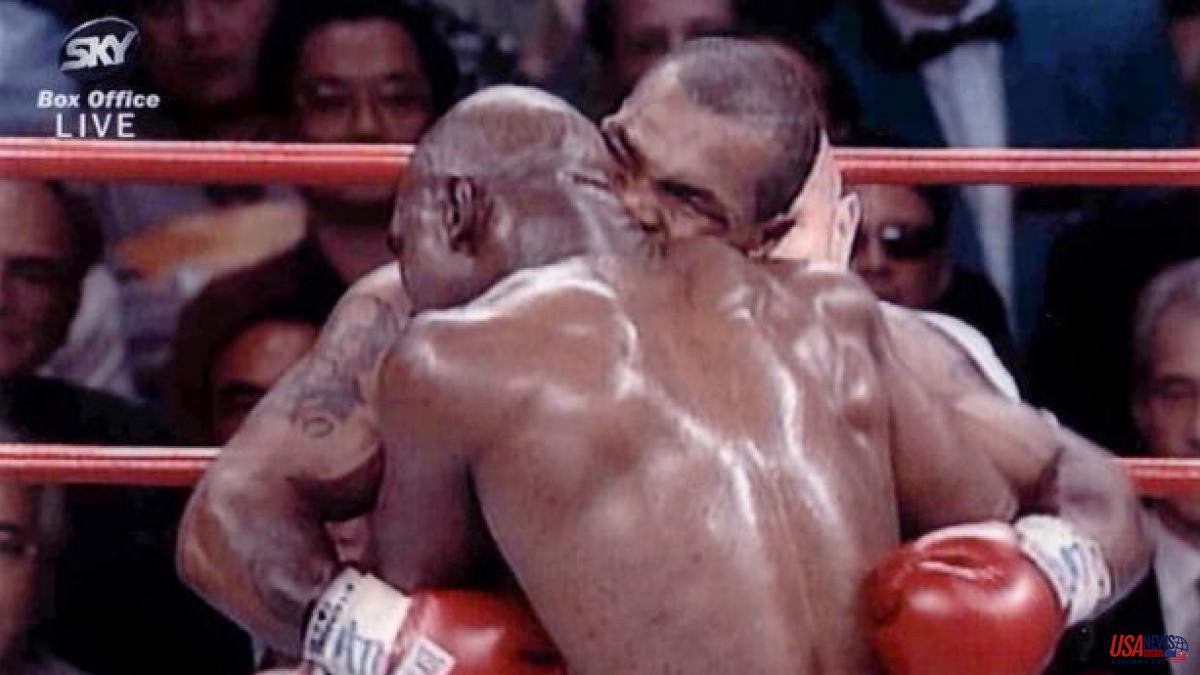 I still adore Mike Tyson. What happens is that the demons possess him

Amidst the noise, Evander Holyfield notices something strange. At the start of the third round, he tells Judge Mills Lane:

–Tyson has taken off his mouthguard!

Lane stops the fight for a few seconds and admonishes Tyson, the applicant, who returns to the corner and repositions his protector.

Although he only does it halfway: the man is blind with rage, because he is falling again against Holyfield, just like in 1996. And for that, he has lost the oremus.

Two minutes later, Tyson hugs Holyfield, it's a bear hug, a heavyweight hug, and he charges his head into Holyfield's shoulder and spits out the mouth guard. And then, Virgin Saaaaaaanta, bites Holyfield's right ear.

And spits out a piece of it!

Holyfield writhes in pain, blood spurts from his ear, the world freezes as millions of people are watching that fight, the fight for the world title in the category.

Lane stops the duel and penalizes Tyson with two points, but the monster is already an ogre and doesn't care about everything, the pain of his rival, the stupefaction of the world. Like a great white shark, he charges again, now biting into the left ear.

-A bite, perhaps. Two is too many,” Judge Lane says.

End of the fight.

"When I think of that bite, I see impotence," Santiago Rojas, an exceptional Dominican boxer, now retired, tells me.

–I felt anger and frustration –Manuel Massó tells me. He was European champion in 1977.

"I've never seen anything like it." And I have never seen him again – Rubén Valcárcel tells me, also a former boxer, today a teacher in Barcelona.

Amazement is followed by chaos.

Two million people have attended the duel on pay per view. Holyfield is going to take 30 million euros. Tyson, around 26. Those 26 million must be deducted 10%, the price of the bite.

The police jump into the ring.

Tyson makes a fuss, beside himself. Holyfield takes a seat in the corner.

Glasses and bottles rain down on Tyson, who is escorted away by the agents. Many hours later, fights are still rife outside the MGM hotel. Some speak of stampedes and shootings. Nobody confirms it.

Tyson is 29 years old and he is already the ogre, in case anyone still had doubts. He has spent three years behind bars, convicted of raping Desiree Washington in 1990, her criminal record is enough to fill out a couple of pages in Din A4.

The jokes come out. They name him sportsman of the ear.

They say that soon he will fight with Hannibal Lecter.

No one would tell you those jokes face to face.

Holyfield is 34 years old and in the hospital, while his ear is being sewn up, he bursts out laughing.

I still adore Tyson. But he needs a new savior, he says, while calling Atlanta to talk to his three children.

The drift of one and the other raises two currents.

The chroniclers remember the origins of both, amateur boxers who, in 1984, dreamed of being Olympians. Together they had spent some time in Colorado Springs, in a six-month concentration between whose walls the Tyson teenager had revealed himself, completely ravaged.

Nobody wanted to train with him, nobody got into the ring to throw gloves with Tyson. Doing so carried risks for him. Tyson was fiery in his manner, a cyclone out of control.

No one trained with him except Holyfield, a kind of protective father.

At the trials in Fort North, Texas, Holyfield would win his place (he would be bronze in heavyweight in LA'84); he would also Henry Tillman (gold in the same category). Tyson, no, Tyson had been left out, he would not be an Olympian, not then or ever.

"My father was an alcoholic and a pimp," Tyson would say years later.

The chroniclers tended to psychoanalyze him, they insisted on the dichotomy that separated Tyson from Holyfield. Speculations were unleashed. For years, the possibility of a third Tyson-Holyfield was raised, a duel that never took place.

Holyfield extended his career until 2011 (44 wins, ten losses and two draws), he did not go through the turbulence of the shady Tyson, definitely becoming a showman. Tyson got half his face tattooed, walked a tiger in The Hangover, offered monologues on Broadway. He went bankrupt and laughed at himself, set up dozens of companies, marketed marijuana, designed cannabis jellies in the shape of a bitten ear. He called them Mike Bites.

In a recent interview, when asked about that episode in Las Vegas, Tyson said:

(As a presentation of their gummies, it is a lousy speech).