Messi: "I am enjoying a lot; we are now where we wanted"

The adjectives with Leo Messi have been over for a long time. 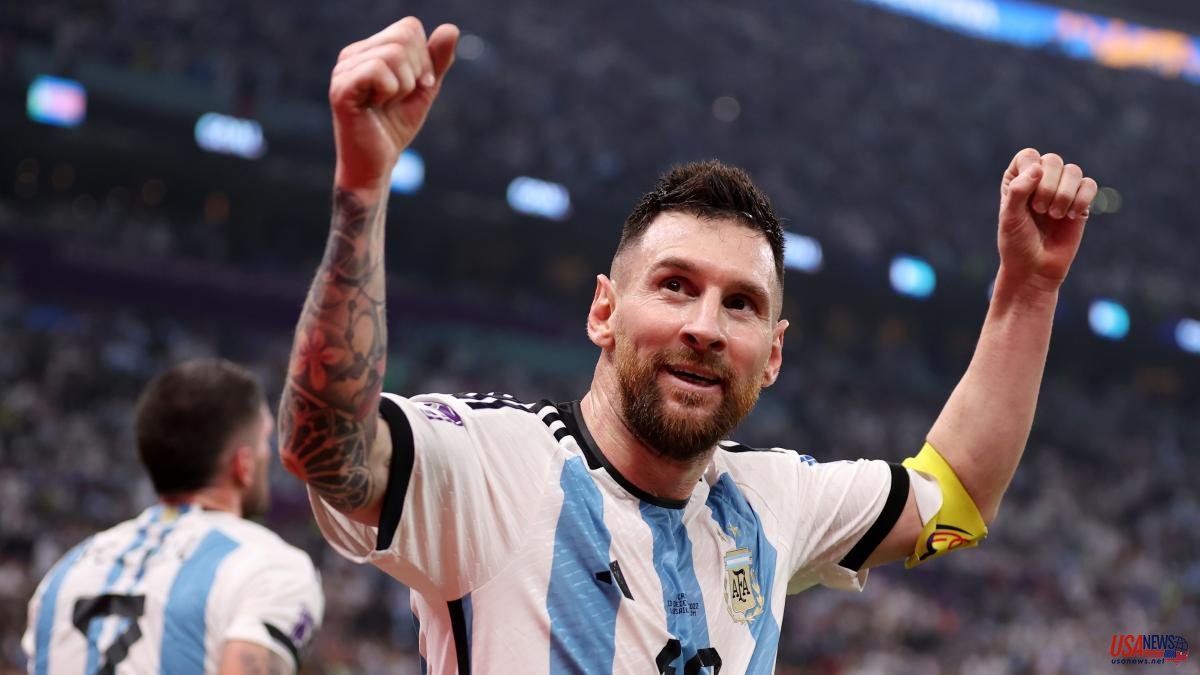 The adjectives with Leo Messi have been over for a long time. At 35 years old, the star of the Argentine team continues to shine brightly and next Sunday he will have another chance to lift the World Cup that eluded him in 2014.

The PSG footballer once again gave a recital on a football field. This time the victim was Croatia, current runner-up, unable to stop him. Messi scored the first goal from eleven meters and assisted Julián Álvarez in the third. After the game, he explained how he felt after getting through to the final.

"Many things have gone through my head, it's very exciting. Seeing these people, the family throughout the World Cup... it was incredible. We are now where we wanted to be," he said. And he added: "I've been enjoying a lot since we arrived. We started losing. We asked people to trust us because we knew it. This group is crazy, we did it. Enjoy all this."

After many years of suffering wearing the albiceleste, Messi is now at ease and dedicates this good moment to his loved ones. "I remember my family, it's the best for me. We've had a very hard time and today we have to experience something spectacular," she said.

Named again as the best man of the match, he stressed that his team prepared the match "very well", that he knew "it was going to be what it was", because his rival has "a lot of possession, but it is messy", and remarked that he feels "good, strong" and is "enjoying very much" the whole journey with his team in the World Cup.

"I am enjoying all of this very much. I feel good. I feel strong to face each game. We have been making a very big sacrifice. The last game we played was with an extra time that was not easy at all. We arrived tired, but the group returned to serve strength from where it doesn't have to give one more plus. We played a very serious game. We knew it was going to be the game it was," he said at a press conference at the Lusail stadium.

And he highlighted the value of the entire team: "This group, beyond the group strength it has, is very intelligent. Knowing how to read the moments of the match. Scaloni had already said it. It is a very intelligent group, which knows how to suffer when it has They have to suffer, they know how to have the ball when they have to, when they have to press, withdraw, they know how to read the games".

"And they have a very good coaching staff that doesn't leave anything to chance, that lets you know every detail of each game and that's a great help for us. At no time do we feel lost on the field, we know what we have to do in every game. We knew the game was going to be this way. Croatia have a lot of possession, but we also knew that they could be our strength when we recovered. They are very messy and leave a lot of space", Messi focused.

Argentina has reached the final, after losing 1-2 against Saudi Arabia on the first day. "The first game was a very hard blow for us, because we came from 36 games without losing and starting the World Cup like this, with an opponent who a priori thought we could win it, was a very tough test for us and for this group. But the group once again showed how strong it is, taking advantage of each match ahead", he recalled.

"What we did is very difficult, because they were all finals, with the great exhaustion of playing each game as a final. We are aware that if we didn't win it would get complicated. We played five finals, we were able to win all five and hopefully the next one will be this way. We were confident that we were going to get it out, because we know what we are as a group and as a team. It helped us grow even more in the championship and us in the group," he said.