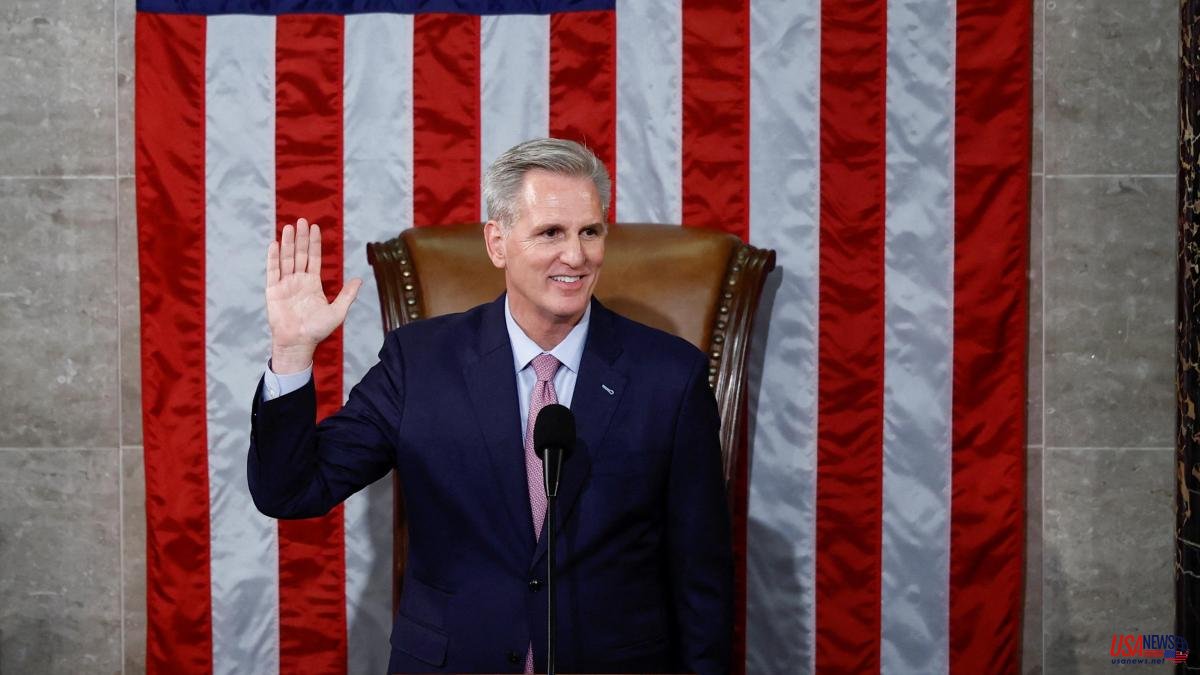 Kevin McCarthy ultimately won. It took him fifteen votes. And an expensive power mortgage in the position that he will occupy as of today. But the 57-year-old Californian representative is already the new president of the United States House of Representatives after achieving 216 supports.

After conceding eleven humiliating defeats that pulverize the record of failures reached a hundred years ago by another candidate for the presidency of the House of Representatives, the current Republican candidate for the position, Kevin McCarthy, began the day on Friday with a desperate discussion to get elected. For this he needed to convince at least 16 of the 20 ultras of his group that so far, in those 11 votes held the three days before, they had voted against him. Or, in the event that there were absences or abstentions that would lower the threshold of the necessary majority over nominal votes, to a proportional figure and equivalent to those 16 out of 20. Difficult.

Shortly before voting resumed, McCarthy announced that he had reached an agreement with one of the leaders of the ultra rebellion, Chip Roy. This, in turn, could attract the support of "up to ten other" representatives to the candidacy. The numbers improved, although the accounts did not finish coming out.

So while other lawmakers reminisced about the bloody ultra assault on the Capitol on its second anniversary, McCarthy had to continue negotiating to reduce the number of internal opponents of his candidacy. The limit of negative votes within his group was four.

But what else could the candidate offer after the enormous assignments he had already made days before? Until now, or at least before the pact with Roy was announced, the long-suffering Republican presidential candidate had already accepted demands as difficult for him and the House as that of a single legislator being able to force a vote of no confidence against the president (until now the Republicans had agreed on a minimum of half the group): a precept that would obviously leave him at the feet of the horses, given the pyrrhic majority of the formation in the House – of 222 seats compared to 213 for the Democrats – and the belligerence of the group's own ultras.

The Republican leader would also have agreed that the far-right faction, barely 10% of the total formation in the House, choose a third of the Republican representatives in the rules committee, which is the one that controls what legislation reaches the full and in what form.

McCarthy also accepts that the electoral financing fund associated with his leadership will stop paying for the campaigns of pro-government candidates for the primaries of the different elections. In this way, the ultras would leave behind what they consider a disadvantage of entering the electoral calls, as minorities to whom the money from that fund does not reach.

McCarthy would also be willing to allow government spending bills to be open to debate in which any legislator would be empowered to force votes to amend such budgets.

But even all that didn't seem to be enough last night. The twelfth ballot opened with more hope than the previous ones. And, in fact, the candidate obtained 13 more supports from his own than in the previous eleven sessions. Not enough. Out of 431 nominal votes cast, he received 213 affirmative and 218 that went to other options: of them, 211 to the Democratic candidate, Hakeem Jeffries and 7 to the two Republican candidates proposed by the ultras (Jim Jordan and Kevin Hern). McCarthy therefore lacked three votes to get ahead, since he could only afford four defections from his own.

Shortly before two in the afternoon, eight at night in Spain, the parliamentary body began the thirteenth voting session. With a novelty This time the ultras did not present candidates. However, six of the rebels – 14 less than the 20 of the previous days – continued to vote for other candidates. McCarthy would have to win two more votes.

At the end of that thirteenth vote, the Republicans proposed a postponement until ten at night –four in the morning in Spain– in order to give themselves time to continue negotiating and crown an agreement. The conservatives got that margin.

But the fourteenth ballot resulted in yet another failure for McCarthy. And, above all, with an enormous and bitter chaos; perhaps one of the biggest chaos that, with the obvious exception of the assault on the Capitol just two years ago, the US Congress has experienced in recent times.

The cause was Matt Gaetz, the ultra representative who in previous votes had proposed and voted for Donald Trump as a candidate for the presidency of the House. When it seemed that McCarthy could finally win, Gaetz voted "present", which in Congress is equivalent to an abstention or an absence, although with the particularity that both lower the threshold of the majority necessary for the candidate to win.

From the outset, and in the midst of great confusion, Gaetz received applause from the Republican bench. But McCarthy, who seemed to have the numbers very clear, got up from the seat, walked over to Gaetz's seat, and faced him. It was a tense scene.

The candidate was really angry and, although what the Trump parliamentarian was saying was not heard, it was obvious that he was asking him to account for the direction of the vote. Why hadn't he supported him? Why was he busting her?

McCarthy returned to his seat. But on the way he heard Gaetz say something to him, and he turned. The scene became violent. Not in the literal sense, thank goodness. The candidate returned to his place. He couldn't do anything.

This time, McCarthy had been short of just one vote.

One of the Republican parliamentarians proposed a further postponement, until Monday. In principle, the necessary vote on the matter yielded a sufficient majority. But at the last moment, several conservative representatives changed their minds at the last moment. So the House would hold a new vote. The fifteenth.

A rumor arose that Gaetz was willing to trade "present" for yes to McCarthy. It was not so. However, all was not lost. I would have to wait until the end...

And everything seemed to change suddenly. The rebel representatives dropped their attitude and, with votes in favor plus six "present" or abstentions, made Kevin McCarthy president.

In between, Gaetz and other dissidents received an important phone call, local media reported. It was Donald Trump. The former president had asked the rebel ultras - most of his supporters - to support McCarthy. To what extent did the call determine the final result? The US media suggested yes.

The second anniversary of the assault on the Capitol ended relatively well. But the horizon remains bleak. The American extreme right has once again demonstrated its ability to put institutions in check.

The leader of the Senate Democratic group, Chuck Schumer, last night launched a pessimistic reflection on the matter. An obviously partisan reflection, but not for that reason unfounded. "To win the votes, McCarthy has capitulated to the demands of a fringe element of the Republican Party. His dream may turn into a nightmare for the American people," he wrote.