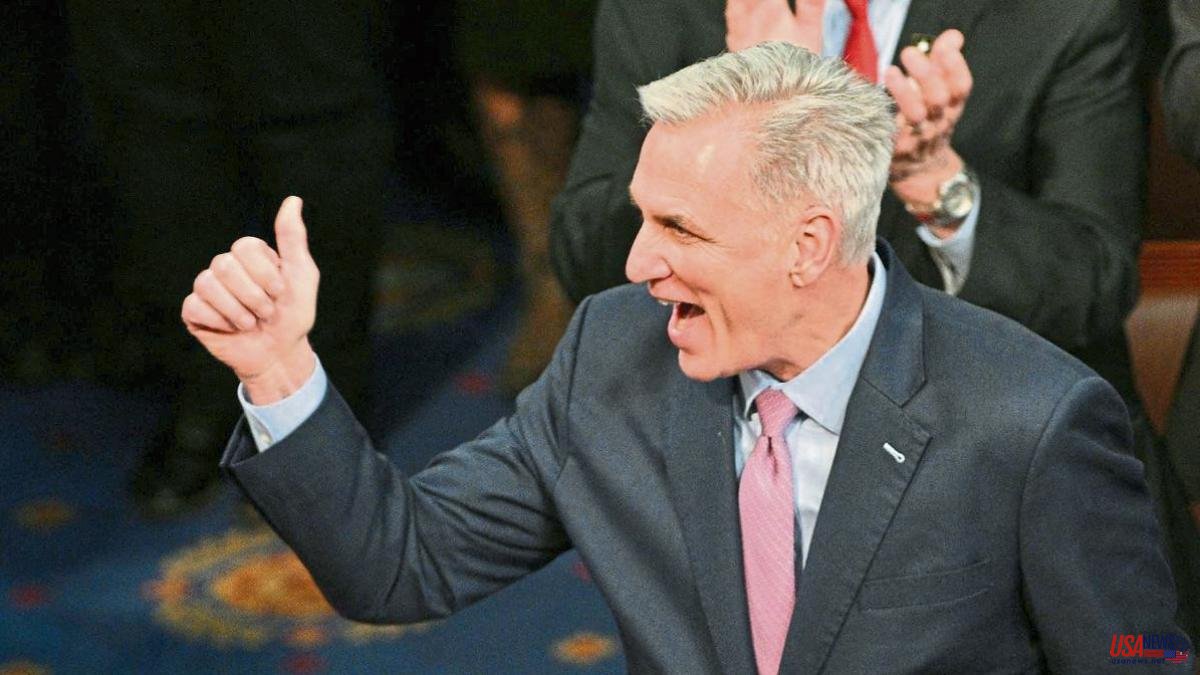 Kevin McCarthy ultimately won. It took 15 votes and 4 days of sessions for this 57-year-old Californian to become the new speaker of the United States House of Representatives, who finally received the support of 216 congressmen.

The price of the victory that McCarthy so longed for has been an expensive mortgage of power in the position that he will occupy as of today and an explicit dependence on Donald Trump, whom he publicly thanked as soon as he won his last-minute efforts to secure the election. Along the way, he had to overcome the resistance of 20 ultras and a last-minute pact with one of the leaders of the rebellion, Chip Roy, on Friday night.

It was the last pact after 14 humiliating votes and a series of assignments that will condition the remaining two years of the legislature. Although before the final vote, which came late at night, McCarthy still had to take one last, bitter drink. And chaos in the institution, one of the biggest chaos that, with the obvious exception of the assault on the Capitol just two years ago, the US Congress has experienced in recent times.

The cause was Matt Gaetz, the ultra representative who in previous votes had proposed and voted for Donald Trump as a candidate for the presidency of the House. When it seemed that McCarthy could finally win, Gaetz voted "present", which in the congressional system is equivalent to an abstention or an absence, although with the particularity that both lower the threshold of the majority necessary for the candidate to win. From the outset, and in the midst of great confusion, Gaetz received applause from the Republican bench. But McCarthy, who seemed to have the numbers very clear, got up from the seat, walked over to Gaetz's seat, and faced him. It was a tense scene.

The candidate was really angry and, although what the Trump parliamentarian was saying was not heard, it was obvious that he was asking him to account for the direction of the vote. Why hadn't he supported him? Why was he busting her?

McCarthy returned to his seat. But on the way he heard Gaetz say something to him, and he turned to face her. The scene became tense and extremely violent. Finally, the candidate, whom the rebels accuse of not being right-wing enough, returned to his place. He couldn't do anything.

Throughout this process, the long-suffering Republican presidential candidate has accepted demands that are as difficult for him and the House as that of a single legislator being able to force a vote of no confidence against the president (until now the Republicans had agreed on a minimum of half the group). . It is a precept that leaves him at the feet of the horses, given the pyrrhic majority of the formation in the Chamber – of 222 seats compared to 213 for the Democrats – and the belligerence of the group's own ultras.

The Republican leader has also agreed that the far-right faction, barely 10% of the formation in the House, choose a third of the Republican representatives in the rules committee, which is the one that controls which legislation reaches the plenary session and in what way

McCarthy also accepts that the electoral financing fund associated with his leadership will stop paying for the campaigns of pro-government candidates for the primaries of the different elections. In this way, the ultras would leave behind what they consider a disadvantage of entering the electoral calls, as minorities to whom the money from that fund does not reach.

McCarthy is also willing to allow government spending bills to be open to debate in which any legislator would be empowered to force a vote to amend such budgets.

The second anniversary of the storming of the Capitol ended relatively well. But the horizon remains bleak. The American extreme right has once again demonstrated its ability to put institutions in check.

The leader of the Senate Democratic group, Chuck Schumer, last night launched a pessimistic reflection on the matter. Partisan, but not for that reason unfounded. “To get the votes, McCarthy has capitulated to the demands of a fringe element of the Republican Party. His dream may turn into a nightmare for the American people,” he wrote.

In case clues were needed as to who has pulled the strings of this election, the first and significant sentence of the recently elected president of the United States House of Representatives as soon as the agonizing session ended was for Donald Trump.

Kevin McCarthy lavished praise and homage to the ultra-fair former president two years after, in the same place, thousands of Trump supporters staged a coup attempt to try to annul the result of the presidential elections.

"I don't think anyone should doubt President Trump's influence on the vote," McCarthy said bluntly in confirmation of the information that had circulated minutes before, when it was learned that the Republican leader had called the rebels in the House to convince them to stop rejecting McCarthy's candidacy.

It must be remembered how, after that attempt instigated by Trump himself on January 6, 2021, the now president of the country's main parliamentary institution backed down from his initial reproach to the former president for his role in the insurrection and solicitously went to his residence of Mar-a-Lago.

McCarthy had initially said that Trump bore "responsibility" for the riot on Capitol Hill. But days later he changed his position. She went to the leader's residence in Florida, took photos with him and, as a reward, obtained an important commitment from the host: he, Donald Trump, would help him recover the House of Representatives. Trump has delivered, and McCarthy is today the weakened president of the second largest institution of American democracy.