Mañueco, Rueda and Moreno agree to demand from Sánchez changes in the financing system

The recently inaugurated president of Andalusia, Juan Manuel Moreno Bonilla, has concluded this afternoon the trio of meetings held in Moncloa by the regional presidents of Galicia, Castilla y León, and Andalusia -all of them from the PP- as a round of contacts by the leader of the Executive, Pedro Sánchez, with all of them. 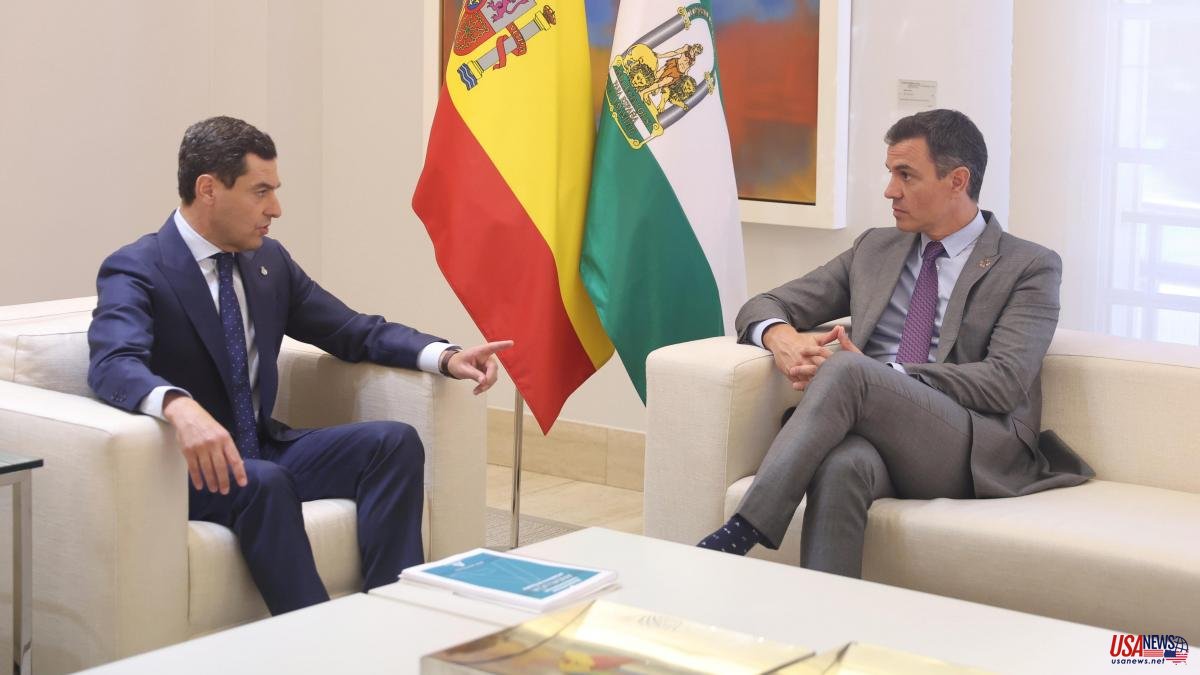 The recently inaugurated president of Andalusia, Juan Manuel Moreno Bonilla, has concluded this afternoon the trio of meetings held in Moncloa by the regional presidents of Galicia, Castilla y León, and Andalusia -all of them from the PP- as a round of contacts by the leader of the Executive, Pedro Sánchez, with all of them. The first, Alfonso Rueda, promoted to president of the Xunta after the resignation of Alberto Núñez Feijóo. And Alfonso Fernández Mañueco and Juanma Moreno Bonilla re-elected in the respective regional elections held in 2022.

Although Genoa has stressed in the previous one that Feijóo has not imposed any guideline, the three barons have lavished themselves on the need to renew the regional financing system, considering each one for their part, harmed compared to other territories presided over by some of the partners. of investiture.

Their complaints, however, were mitigated by the government spokesperson, Isabel Rodríguez, who replied to the government by recalling that the communities had "never" had so many funds to attend to their powers.

Moreno Bonilla has delved into financing and, in addition to the joint request with his party colleagues, has called for the creation of a "transitional leveling fund" for four "underfunded" autonomies that, in addition to Andalusia, would include the Valencian Community, Murcia and Castile-La Mancha.

The Andalusian president has estimated the amount at a total of 1,731 million euros with a larger share for Andalusia and Valencia (almost 1,500 between them) and a smaller share for Murcia and Castilla-La Mancha. "It is perfectly assumable by the State" and the President of the Government "has taken note and has transferred that he is going to study it", he has slipped.

The conference was started by the president of the Junta de Castilla y León, Alfonso Fernández Mañueco, who has urged Sánchez to reform the regional financing system, expressing his "concern" that there may be "privileges" for some autonomous communities, in veiled reference to Catalonia.

"We are going to be very vigilant that the constitutional mandate of equality between territories is fulfilled," proclaimed Mañueco, who did not hesitate to describe the current system as "bad" for Castilla y León by not establishing depopulation as a key factor.

For this reason, it has once again opted for this new model to be agreed between all the autonomous communities of the common regime and the central government within the scope of the Fiscal and Financial Policy Council.

The appointment, which has lasted for two hours, has concluded with several commitments in terms of infrastructure, especially railways and roads, on which Alfonso Fernández Mañueco promised that he will be "vigilant". In due course, the Chairman of the Board has also addressed issues such as a single EBAU, the fight against forest fires, the PERTEs, the CAP, depopulation. Claims that he, according to what he has said, he has delivered to the President of the Government in a document.

"I have taken the meeting with Sánchez seriously, how could it be otherwise, I have been vindictive and now the ball is in his court", added the head of the Executive of Castilla y León.

The reply has been carried out by the Minister of Territorial Policy and Government spokesperson, Isabel Rodríguez, who has advised the autonomous communities and, especially Castilla y León, to modernize their firefighting plans, since some are from a few years ago. several decades and claims have changed.

The Government, he has acknowledged, is ultimately responsible and the one that puts all the resources, but he has pointed out that climate change is a reality, in a veiled allusion to the denialism of Vox, a coalition partner of the PP in Castilla y León, for which has urged the Castilian and Leonese administration to "change the prism to manage them".

Rodríguez has also defended the autonomous State to address and improve various issues, from the fires now, to the strengthening of the welfare state, progress in territorial cohesion or financing. The minister has referred to the 134,000 million euros in aid that they will receive in 2023, of which Castilla y León corresponds to 7,734 million for deliveries to accounts and 575 for previous settlements, 25% more than this year and has underlined that the communities "never before" had so many funds to attend to their competitions.

The fires have also been one of the touchstones of the subsequent meeting that Sánchez has held with the president of the Xunta de Galicia. Alfonso Rueda has asked Sánchez to mobilize aid as soon as possible for the fires that have devastated this territory in recent times and has charged against the "unfortunate statements" made by the Minister of Defense, Margarita Robles, about the intervention of the UME, although not It has been taken for granted when, from Moncloa, there is talk of communities "that have not done their homework".

Regarding the request made by his counterpart from Castilla y León, Alfonso Fernández Mañueco, to convene a Conference of Presidents to address the situation of the fires, Rueda admits that he thinks it's "good" to talk about this issue that "greatly worries the citizenship". However, he believes that "there are much more urgent issues" to call a Conference of Presidents, "without denying the importance of the fires."

Meanwhile, the government spokeswoman, Isabel Rodríguez, who appeared at a press conference after Rueda, has avoided "discussing an issue that goes beyond declarations." And she has done so by emphasizing that "there are objective facts of an absolute and loyal collaboration of the State with all the communities and the communities with each other."