The Barcelona derby was hot to close the year. 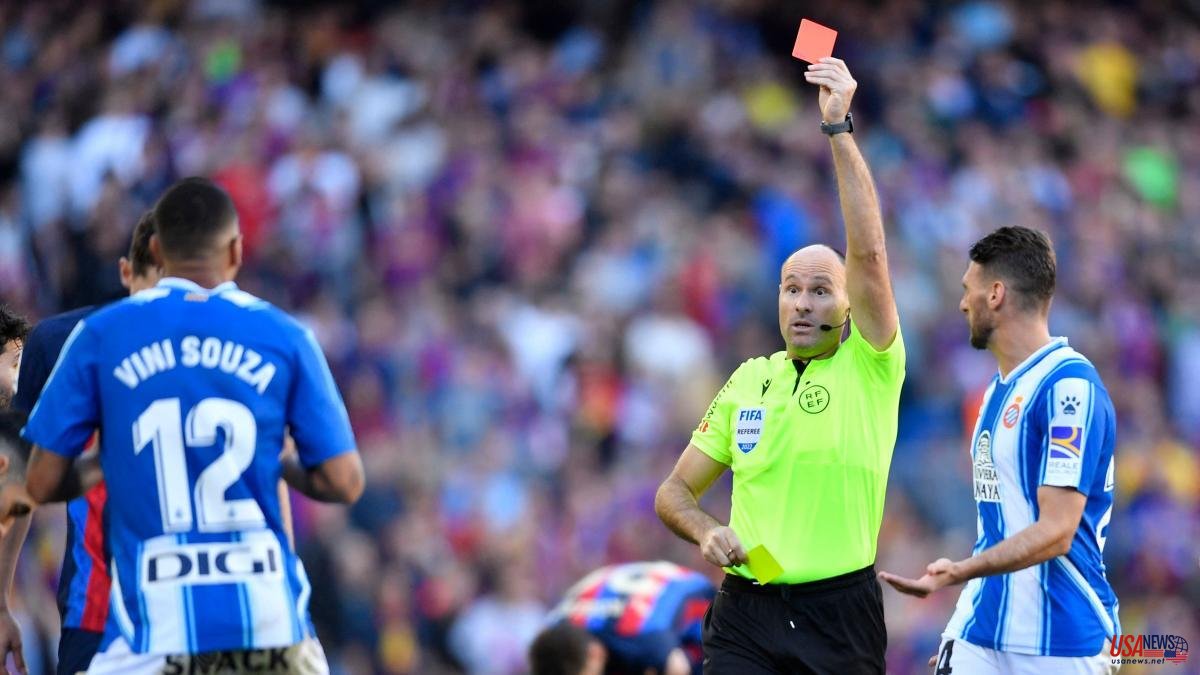 The Barcelona derby was hot to close the year. The precautionary measure granted to Robert Lewandowski by the Madrid Contentious Court allowed the Barça striker to play despite having a three-match ban. That last-minute decision angered Espanyol. Outraged, the blue and white club decided not to send any manager to the Camp Nou. Once the ball rolled, the game was much calmer than expected... until Mateu Lahoz became the protagonist.

The Valencian referee captured all the attention in the final minutes, especially once Espanyol equalized with a penalty in a match controlled at the beginning by Barça but did not finish off. The protests appeared and, with them, an arsenal of cards that ended in three expulsions in three minutes, although the last one shown to Cabrera was finally withdrawn at the request of the VAR.

In total he showed 14 yellow cards, his record in the First Division; two twice for Jordi Alba and Vini da Souza (plus two bookings for Arnau Tenas and Xavi). The Barça full-back was sent off for two protests in four minutes, drawing the ire of the Camp Nou. Three minutes later, in a counterattack by Barça, Espanyol would momentarily lose two men in one breath. Vini stopped the counterattack with a free kick and Cabrera, with Lewandowski on the ground, kicked the Pole's head.

The game was stopped for a few minutes until the VAR, after reviewing the action of the blue and white defender, alerted Mateu Lahoz to review the action. The referee then considered that there was no intention of the Uruguayan in the kick and did not even leave the action on a yellow card, which would also have meant the expulsion of Cabrera, who had seen the first in the first half.

The game was revolutionized in the last minutes. A lot of time was lost in scuffles and protests, also from the bench. Mateu Lahoz added nine minutes and they ended up playing ten and a half. The marker no longer moved (1-1). That "lack of control" of the referee in the final phase of the match was criticized by Xavi. "He handed out meaningless cards," said the technician at a press conference.

It was the first game for the Valencian referee since the controversial quarterfinal tie between Argentina and the Netherlands in Qatar. In that match he made history by becoming the referee with the most bookings in a World Cup match (17 bookings).

In the Barça dressing room there is unanimity: Mateu Lahoz did not remember that he had taken the first yellow from Jordi Alba when he sent him off. "I'm a footballer with a lot of temperament. Sometimes I make a gesture that I shouldn't, but today I didn't understand the expulsion. I only told him that Joselu had made Christensen's bed in a foul. I said it with all the respect of the world. He (Mateu Lahoz) thought it was the first yellow card. For me it's not even. Sometimes I'm wrong but today not at all. I was surprised by the expulsion", explained the left-back after the game.

Sergi Roberto moved along the same lines. He assured that Mateu Lahoz forgot that Jordi Alba had a yellow card when he showed him the second one moments later. The Barça captain said that Mateu did not know how to give him an explanation after the expulsion of his teammate. "I don't know what he (Alba) said to get him expelled. Jordi only told me that he said 'he had made the bed'".