Massacre of Uvalde: the distressing images of the rescue of school children

The tragedy at the Uvalde elementary school in Texas, USA, continues to fester pain and raise new questions that question the police operation. 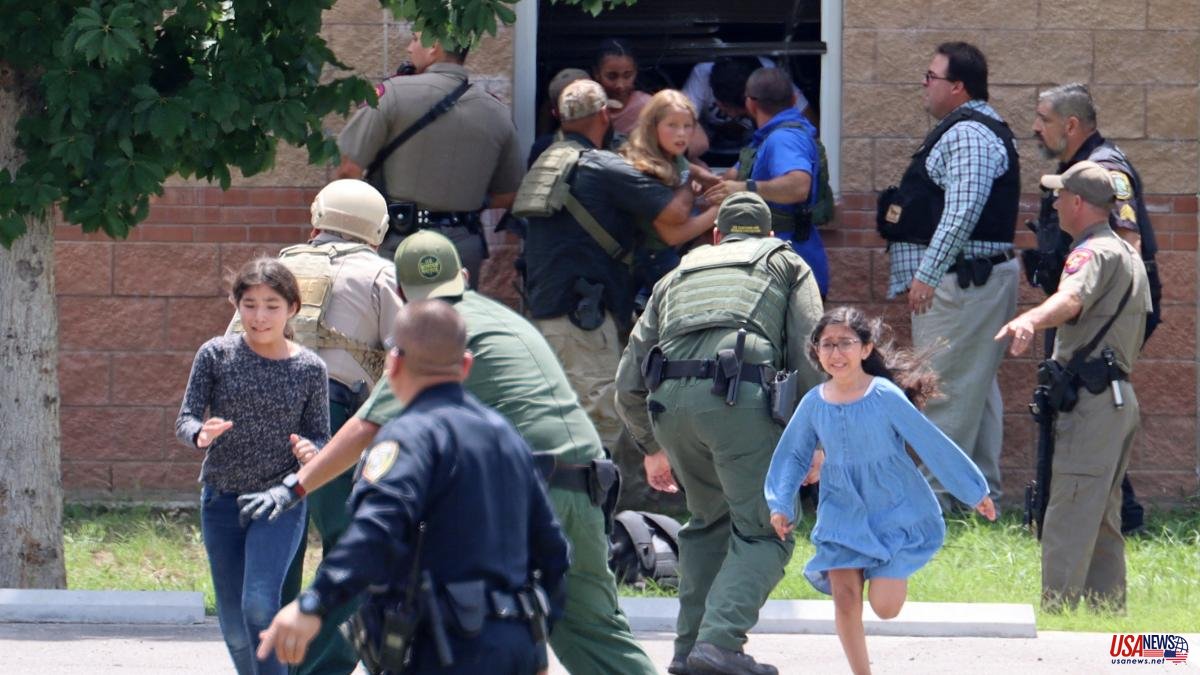 The tragedy at the Uvalde elementary school in Texas, USA, continues to fester pain and raise new questions that question the police operation. While investigators continue to gather information to unravel what happened, some US media agree in pointing to Pedro "Pete" Arredondo, the police chief of the Uvalde School District (Texas) as the person responsible whom the Texas Department of Public Safety accused on Friday for making the "wrong decision" of delaying officers' entry to the shooting room for nearly an hour.

In parallel, the survivors of the mass shooting, which cost the lives of 19 children and two teachers, are beginning to share their stories, describing in first person the horror of the tragedy they experienced that day. And new images of the minutes after the shooting have been released. In the snapshots you can see the panicked faces of the boys and girls who manage to escape from the school building through a window while outside they are received by the police.

Miah Cerrillo, 11, told a CNN producer that her fourth-grade class was watching Lilo

A teacher at the school, who declined to give her name, told NBC News that she closed her classroom door immediately after hearing gunshots in the hallway. By her account, students and faculty had practiced shooting drills for years.

"We knew that it was not a drill and that we had to be quiet so as not to give ourselves away" and added, "it was the longest 35 minutes of my life."

Edward Timothy, a sophomore, described the sound of gunshots on CNN as "something like fireworks." He also recalled that an adult woman entered her class and told the children to hide under her desks.

Elementary students kidnapped by the gunman inside a classroom at Robb Elementary School in Uvalde repeatedly called 911 for help, including one girl who explicitly pleaded, "Please send the police in now."

But there was a 78-minute gap between the first shots fired at Salvador Ramos outside and the moment officers opened the classroom door and killed him.

Several United States media blame Pedro "Pete" Arredondo, the chief of police of the Uvalde School District (Texas), for the police inaction and attribute the decision to delay the entry of the agents to the classroom of the shooting for almost an hour. A decision, which the authorities already admitted on Friday that it was "incorrect".

The director of the Texas Department of Public Safety, Steven McCraw, acknowledged yesterday that not breaking down the door and waiting for the concierge to arrive with the key was a "wrong decision" and blamed it on the highest police officer who was at that time. at school, but did not reveal his identity.

Both CNN and Fox News assured that the "police officer" whom the Texas Department of Public Safety accused on Friday of having made the decision not to enter the classroom is Arredondo.

According to McCraw, after hearing multiple shots in the classroom when the agents tried to gain access, the aforementioned chief interpreted that there was no one left alive except the aggressor.

This interpretation led him to decide to change the protocol from "active attacker" to "entrenched suspect", so instead of breaking down the door and breaking in exposing his officers to the assailant's gunfire, he opted to wait for the assailant to arrive. the concierge with the key and the reinforcements with the appropriate equipment.

"(The police chief) considered that there was time and that there were no more children in danger. Obviously, there were and the attacker was still active. It was a wrong decision and there is no excuse that is valid," McCraw acknowledged.

This misjudgment by police officers could lead to disciplinary action, lawsuits, and even criminal charges against the police.

The apparent inaction of the police for more than an hour contravenes established protocols for active shooters, according to US media, and generates outrage among those who believe that a faster intervention would have saved lives.

The Associated Press spoke with some officers who, on the promise of anonymity because they are not authorized to speak publicly about the investigation, explained that audio recordings from the scene recorded officers from other agencies telling the school police chief that he had to act immediately because the shooter was active and the priority was to stop him. But Uvalde School District Police Chief Pete Arredondo decided the assault group should wait to negotiate with the assailant, believing the active attack was over and the gunman was keeping the hostages alive, according to Steven McCraw. , head of the Texas Department of Public Safety.

In the face of this new evidence, Texas Governor Greg Abbott backtracked on his initial praise for the police, saying they "had been duped" and promising an investigation to unravel "exactly who knew what, when, and who was in charge." ”.

Rarely are criminal charges filed against law enforcement in shootings like the one that occurred this week. One exception was the former school resource officer accused of hiding during the 2018 shooting at Marjory Stoneman Douglas High School in Parkland, Florida, that left 17 people dead.

Without going into criminal cases, the possible administrative punishments, imposed by the department itself, could range from a suspension or reduction of salary to a resignation or forced retirement or a total dismissal. In terms of civil liability, the legal doctrine called “qualified immunity”, which protects police officers from lawsuits unless their actions violate clearly established laws, could also be at play in future litigation.

Prosecutors will have to decide whether Arredondo's decision and the officers' inaction constituted a tragic mistake or criminal negligence.