In these days of uncertainty and fear, any idea seems good to escape the military mobilization in Russia. 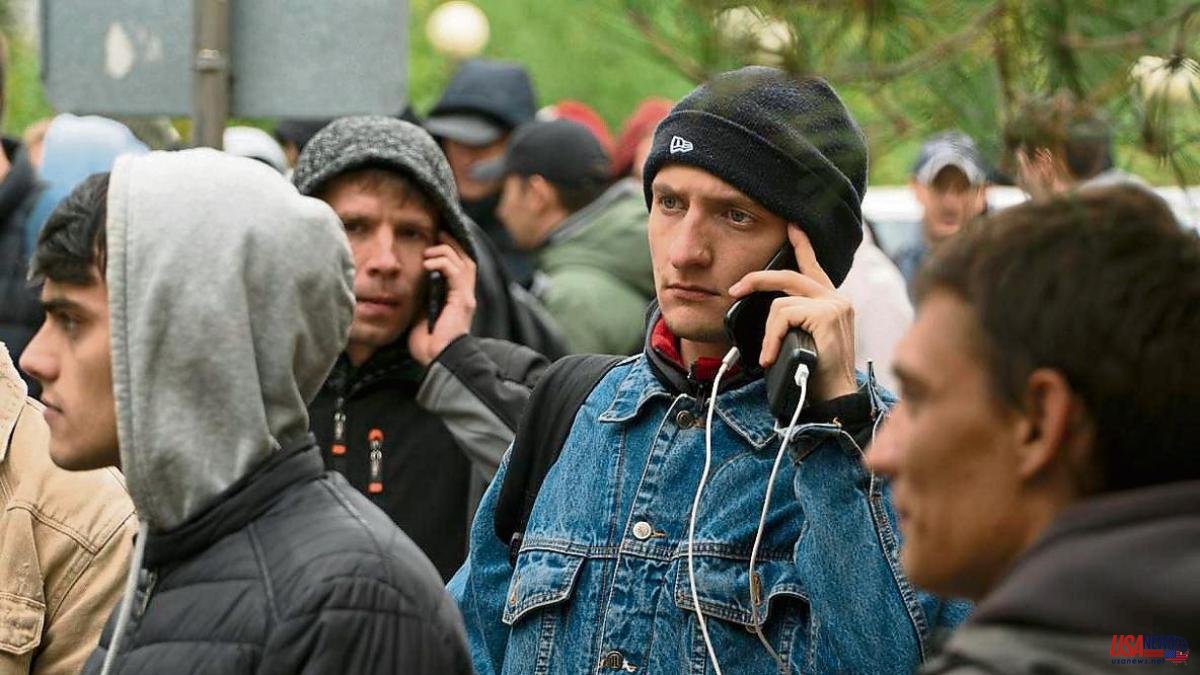 In these days of uncertainty and fear, any idea seems good to escape the military mobilization in Russia. On Monday night, the Estonian border guard arrested a 38-year-old Russian citizen who had crossed the Narva River with a paddle surfboard, which in that area draws the border between the two countries. After searching for him with dog patrols, as detailed by ERR television, they arrested him at a bus stop. They fined him and sent him back to Russia.

Thousands of Russian men of military age, sometimes with their families, have chosen official border crossings to avoid having to fight in Ukraine. Since the Russian president, Vladimir Putin, decreed on September 21 the partial mobilization to recruit 300,000 reservists, this exodus has strained the borders with neighboring countries.

It is Georgia, in the Caucasus, that is under the greatest pressure. The Vierjni Lars pass can only be crossed by car, but in the face of the 15-kilometer traffic jam that was mounted on Tuesday, the authorities allowed it to be done on foot and many left their vehicle abandoned in the gutter. Others have used the bicycle to flee.

In the last week, almost 180,000 Russian citizens have escaped by road. According to their respective Interior Ministries, 53,000 have gone to Georgia and 98,000 to Kazakhstan, where they do not require a visa.

The arrival in a torrent of so many Russians may pose problems for them. It is not seen with good eyes, especially in Georgia, where the 2008 war for South Ossetia is still remembered. After that conflict, Moscow recognized this territory and Abkhazia as independent. Yesterday a demonstration near the border post called for the passage to be closed to the Russians, collects AFP.

More welcoming seems Kazakhstan. His president, Kassim-Zhomart Tokayev, who has said that he will not recognize an annexation of the territories that Russian troops control in Ukraine, ordered his government on Tuesday to help the Russians who arrive. In Uralsk, a city in northwestern Kazakhstan, volunteers have even been organized to assist them.

The only EU country affected by the exodus is Finland, where you have to enter with a Schengen visa. The Finnish Government yesterday finalized a mechanism to close the passage to Russian tourists, as Poland, Estonia, Latvia and Lithuania have already done. Helsinki media pointed out that it could come into force today, which would add pressure to the border.

The Finnish border service reported yesterday that 50,655 Russians have crossed into the country since the 21st. But only half fled, since 25,979 have returned to Russia. That represents 51%, while a week earlier the return rate was 91%.

3,000 Russians have arrived in Mongolia, according to local media.

Add to that those who hurriedly packed their bags to catch a plane as soon as they heard Putin's message to the nation on that fateful Wednesday. In total, the exodus could reach 260,000, according to the opposition newspaper Nóvaya Gazeta Evropa, citing sources from the Russian presidential administration.

To try to stop this exodus, on the ground the Russian republic of North Ossetia, which borders Georgia, set up a recruitment office on the border yesterday and issued citations to the men on the lists to fight in Ukraine. It also began to prevent the entry into its territory of light vehicles from other regions of Russia.

From politics, the president of the Duma, Viacheslav Volodin, one of the trusted men of the Kremlin, criticized those who are leaving. "They haven't smelled the gunpowder yet and they've already gotten under the beds and skirts," he scolded them. He pointed out that Russia has lists of those who leave the country and offered to deliver the vehicles abandoned in the flight to the families of those recruited.