Marta Cardona, to consider leaving football in January to remove the fears of Spain

When the final whistle blew at the Brentford Community Stadium, Misa's reaction was to run across the field to hug the star of the night. 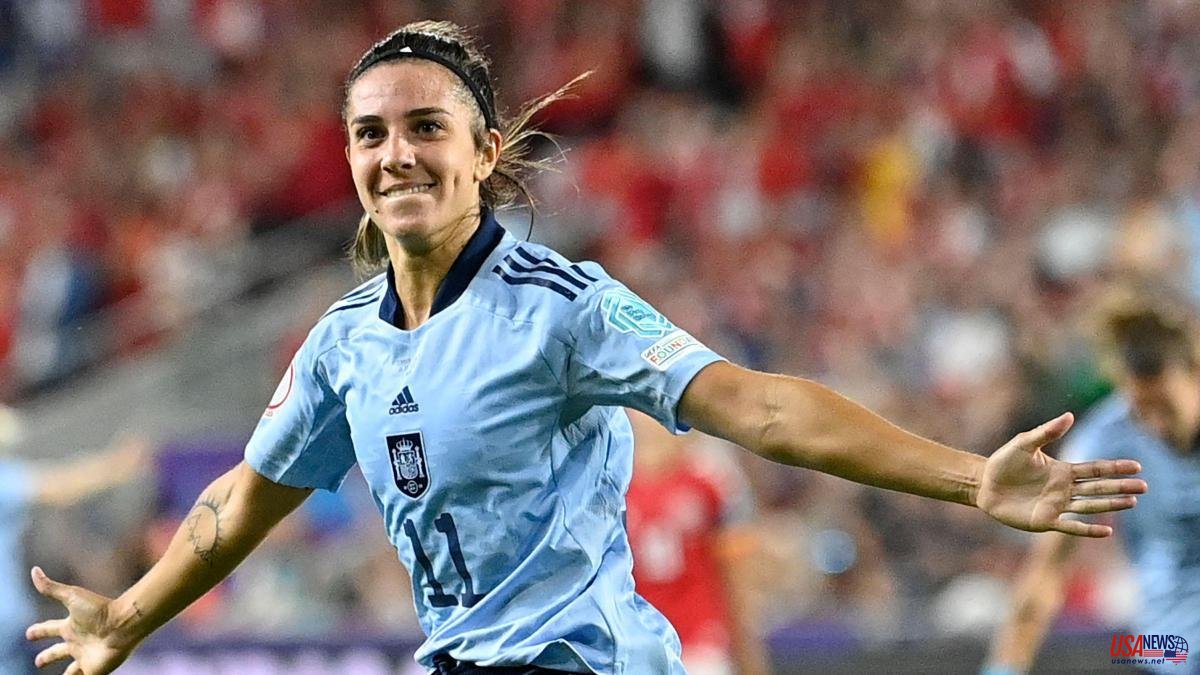 When the final whistle blew at the Brentford Community Stadium, Misa's reaction was to run across the field to hug the star of the night. The emotion of the Spanish substitute goalkeeper, like that of the rest of her teammates, was double. The team had qualified for the fourth time among the top eight in the European Championship and had achieved it after a win against Denmark thanks to a goal from Marta Cardona (1-0). The draw was worth it, but the Aragonese's pumped header in the 90th minute put an end to Spain's nerves.

Something liberating for Cardona after a very tough year at Real Madrid marked by injuries and relapses. Misa and the rest knew it. In August of last year she underwent a meniscus operation that took her off the pitch until mid-December. With many ups and downs until February, it was difficult for her to find a place in Alberto Toril's team. When it seemed that she had put her physical problems behind her, she suffered a new setback: a quadriceps injury that put her out of action for the remainder of the season.

When the year began, the footballer maña seriously considered hanging up her boots and focusing on her law studies. “In January I came to consider it more than once. I talked about it with my friends: 'I'm going to quit football. It's not worth it to me '”, she confessed last night before the SER microphones in the mixed zone. Sheltered by her family, her friends (many of them in the red outfit) and with psychological help, she finally did not give up. Neither did she fall apart when Madrid told her at the end of the season that she was not renewing it-she is currently with the team, although her future seems to be at Atlético de Madrid-.

At 25 years old, he has many years left in football. “Life puts you obstacles to know how strong you are and I am a fighter, I always have been, nobody has given me anything. I am going to continue forward, I am going to try to reach my best level and I will always take advantage of all the confidence that they give me”, she added excitedly.

One of those who has never doubted his talent is Jorge Vilda. They always kept in touch during their months away from football. The coach, discussed on more than one occasion for his line-ups or choices on the lists, was clear about it. If Marta was fit, she would be in the European Championship.

There was no rush with Cardona. In the first warm-up match against Australia he did not play a minute, but he did participate in the second friendly against Italy. In England, he has played all three games in the group stage, always as a shock. He caused a penalty against Finland and against the Danes the goal came.

"I was very happy that he was able to score, he has given the team peace of mind and has certified the pass to the quarterfinals," Vilda applauded. “The national team has saved me”, said the right winger after the target. It is the best way to restore the confidence of the coach.

In the celebration, she remembered all those who have been behind and who have suffered with her, especially her parents, faithful devotees who go to the Virgen del Pilar daily to pray for the success of the national team and her daughter in the tournament. . Her fingers pointing heavenward was a special dedication to her deceased grandparents: "they are my angels."

Marta Cardona is aware of the difficulty of facing a power like England next Wednesday in Brighton, but this does not detract from her ambition. "We want more, we go for more."

The Zaragozan, who highlights the good atmosphere and the human group that is in the selection, also wanted to have a few words for those who have not been able to be due to injury. "For all the girls who couldn't come, Jenni (Hermoso), Ale (Alexia Putellas) and Vir (Virginia Torrecilla). Go for them." No one better than her understands what they feel.