Markets are confident that central banks will succeed in curbing inflation

The directors and analysts of Banco Santander are confident that the central banks, both the European Central Bank and the Federal Reserve, will be able to curb the high inflation that is punishing the economy. 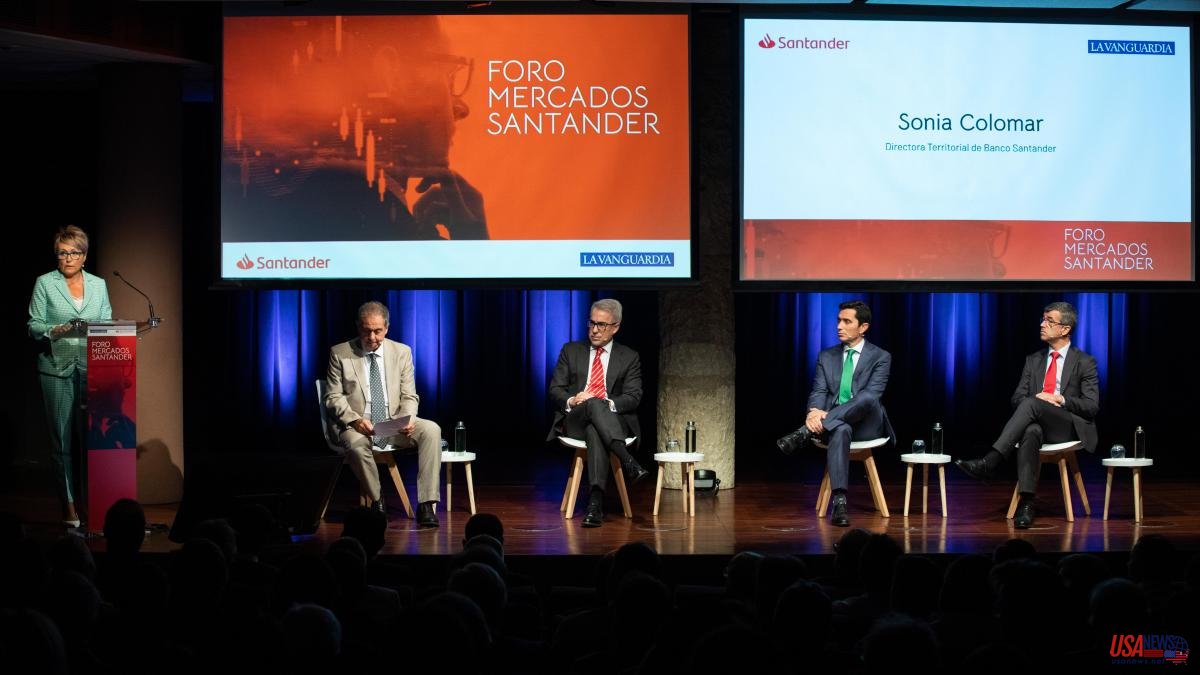 The directors and analysts of Banco Santander are confident that the central banks, both the European Central Bank and the Federal Reserve, will be able to curb the high inflation that is punishing the economy. They warn that, despite the existing uncertainties, the markets are already beginning to discount this scenario, although they recognize that the inflation rate will remain high, at least, until the second half of next year.

At the Mercados Santander Forum organized by La Vanguardia, sponsored by Banco Santander, held this week in La Pedrera, attendees were able to vote from their mobile phones, both from the conference room and virtually from wherever they were physically, on the issues that they were interested

The act was opened by the territorial director of Banco Santander in Catalonia, Sonia Colomar, with a message of optimism for the future. “It is true – she said – that these are difficult times. On the risk side, in the short term we have to attend to the evolution of the war, the scope and consequences of which are still completely unknown, to the rise in the price of raw materials and fuel, to the problems in the supply chains or the escalation of the electricity bill. But at Banco Santander we prefer to be optimistic and, therefore, while managing short-term risks, we cannot lose sight of the opportunities that we have in the middle, such as European funds, the technological revolution or the energy transition. The capacity of the Spanish economy to maintain sustainable growth will depend on our being able to take advantage of these opportunities”.

He stressed that we must be ambitious as a country in implementing the European Recovery Fund to boost sustainable growth, protect and modernize viable businesses that need help, and evolve and support innovative ideas with transformational potential in all areas of the economy. . For all this, according to Sonia Colomar, public-private collaboration is essential and, in this regard, she stressed that Banco Santander is also working to be an active part of that recovery.

"To help businessmen, freelancers and entrepreneurs with European funds, we have had a service for more than a year - he recalled - so that companies can access all the information on the calls for projects charged to these funds. It is a tool that uses algorithms to locate the most suitable funds according to the company's profile and a comprehensive service for those clients who need support in preparing the documentation and processing the aid”.

In the round table held later, and moderated by Enric Sierra, deputy director of La Vanguardia, participated Antonio Espasa, director of Macroeconomics Markets Area of ​​Santander Spain; Gerardo Puerta, director of Asset Allocation at Santander Spain, and Albert Fita, head of Mercados Catalunya at the entity, who explained their views on the issues requested by the attendees.

Antonio Espasa said that high inflation in Spain causes a fall in real income that makes it more difficult to increase demand, which will cause weaker growth. But, as a positive factor, he highlighted that the structural part of the economy is better than in the previous crisis, since the balance sheet of banks, companies and families in Spain has improved a lot. Gerardo Puerta pointed out that public debt interest rate spreads, which have grown considerably, have risen a lot. He said that to avoid problems the European Central Bank (ECB) must protect the weaker countries.

Regarding the evolution of equities, everyone agreed that the correct attitude for investors should be to think in the long term and be patient. "The markets discount the future and trust the central banks," said Gerardo Puerta. He believes that the Spanish stock market, despite everything, is very attractive in the current situation, since the level of the PER is very low. In this sense, in his opinion, the Spanish stock market looks good due to the structure of the country's productive fabric, with a lot of weight given to services and banks. In any case, according to what he said, we will have to wait for the catalysts that will make prices rise.

Albert Fita, head of Mercados de Catalunya, recalls that the Ibex fell 40% between 2019 and 2020 due to the uncertainty of the pandemic; but that, later, between 2020 and 2021, grew by 52%. In these contexts, in his opinion, it can be very interesting to incorporate investment options, on the Ibex for example, into investment portfolios, since they can offer very high returns with relatively low outlays.

Gerardo Puerta added that we must look to the future because inflation is a factor that the markets have already discounted. “Besides, the stock market – he says – always protects against inflation in the long term. Equity is the most reasonable asset. You just have to be patient".

In the international arena, Antonio Espasa warned that inflation is deeply rooted in the United States and that the Federal Reserve will be very aggressive to cool down demand, which was very overactive during the pandemic with significant monetary and fiscal stimuli to avoid recession. In addition to the super expansionary monetary policy of the Federal Reserve, the fiscal policy was also very expansionary, including the distribution of checks to the entire population, regardless of whether they were working or not. All this generated a demand for goods so intense that supply could not meet. The result was a shot up in prices. There was also housing inflation, with increases of up to 40%, and an extraordinary channeling of money towards financial assets. The main problem, moreover, is that there is less active labor force in the country than before the pandemic -five million fewer workers-, and this forces wages to rise and prices to rise. For this reason, he believes that the 2% inflation target will not be reached until the end of 2024 and the beginning of 2025.

In Europe, on the other hand, inflation is fundamentally due to high energy prices, due to the war in Ukraine, which have contaminated the rest of the products. He believes that we will see inflation rates in all the countries of the euro zone until the second half of next year. The ECB will have to tighten its monetary policy, in addition, to balance its interest rates with those of the Federal Reserve to defend the euro against the dollar, since its depreciation is inflationary.

Gerardo Puerta did not hide that the high inflation rates are very worrying. He recalled the words of former US President Ronald Reagan: "Inflation is as violent as a thief, as frightening as an armed robber, and as dangerous as a hitman." Despite this, the financial markets discount that little by little it will be reduced. Despite this, Albert Fita recommended analyzing the possibility of contracting inflation risk coverage at an approximate level at this time of an annual average of 3% over ten years.

Antonio Espasa pointed out that the central banks, hard as they are, are now doing the job they should. “Really,” he said, “they are focused on controlling inflation and they have forgotten about growth. The first thing for them is to control inflation in order to have, later, a healthy growth”. In the United States, rebalancing has already started in consumer goods and real estate. In services, the turning point has not yet been reached, nor in salaries. That is why the Federal Reserve will continue with a tough monetary policy until job creation is cooled, or even destroyed, until wages adjust. He explains that, instead, the situation in Europe is different, since there were not so many monetary or fiscal stimuli. Public protection was also done with direct aid to those who needed it most, whether they were families or companies (ERTE). The key here is in energy prices, the risk of a second round of inflation and the weakness of the currency, which is also highly inflationary. For all these reasons, interest rates will have to be raised more, although not by as much.

Gerardo Puerta estimates that, in this cycle of increases, the maximum level of intervention interest rates in the United States will be 4.5%. Ten-year long rates are already between 3.5% and 4%. In Europe, in his opinion, there are serious doubts as to how far the ECB will be able to raise them, perhaps around 2.5%, although the market is beginning to discount levels close to 3%. “The important thing – he said – is that they correctly gauge the amount of monetary tightening introduced and its impact”. The liquidity restriction also tightens financing and makes interest rates more expensive.

Jordi Guasch, director of Mercados España de Banco Santander, closed the event with a few words of thanks to all the attendees and participants. He said that it is important for the entity to be close to clients and, in this sense, it offers advice and specialized products in financial, balance sheet, currency and liquidity risk management. He commented that both the Euribor and credit spreads are increasing. In this regard, he stressed that financing with collateral (shares, deposits, funds, bonds) can help to obtain better conditions.

Jordi Guasch also reported on the new digital applications that Banco Santander has developed, such as online accounts and new platforms for foreign exchange operations, including from mobile phones. He also reaffirmed Santander's support for companies and families for the ecological transition. He highlighted that the bank has a target of 120 billion euros for green operations until 2025.