Marcos Jr. takes power in the Philippines 36 years after the expulsion of his family

The political rehabilitation of the Marcos family was completed this Thursday when Ferdinand Marcos Jr. 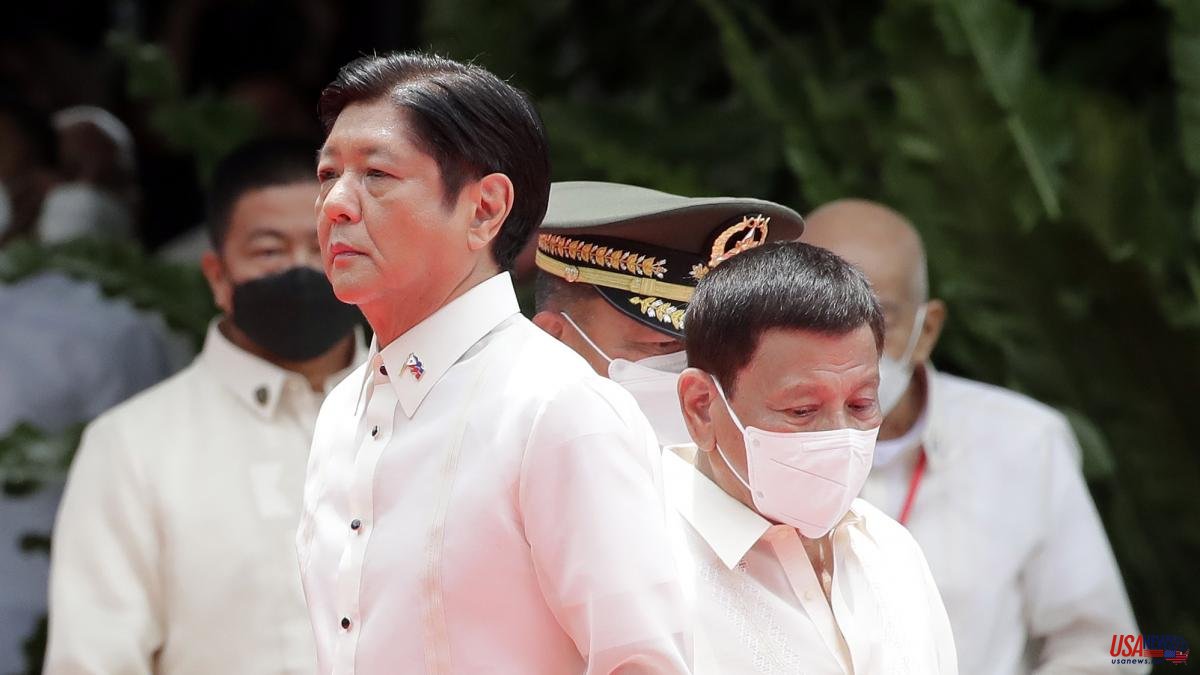 The political rehabilitation of the Marcos family was completed this Thursday when Ferdinand Marcos Jr., son of the late homonymous dictator ousted from power by a popular revolution 36 years ago, was officially sworn in as the new president of the Philippines. The new president, who replaces the controversial Rodrigo Duterte, begins his term with great popular support despite the legacy of his father's dictatorship, which committed serious human rights abuses in the 70s and 80s of the century. past.

“Do not judge me by my ancestors but by my actions,” the 64-year-old nicknamed Bongbong said in a statement, when he received 58% of the votes in the general elections held in May. Two days later, he visited his father's grave in the Manila Heroes Cemetery with his mother, the famous Imelda Marcos, who together with her husband formed a "conjugal dictatorship" accused of looting up to 10,000 million dollars -including works of art, jewelry or property - between 1965 and 1986.

Marcos Jr. was sworn in today as the country's 17th president in a ceremony held at noon (local time) at the National Museum in Manila in front of hundreds of foreign journalists and dignitaries, including Chinese Vice President Wang Qishan and Doug Emhoff, husband of US Vice President Kamala Harris.

In his speech, Marcos Jr. resumed the calls for unity in his electoral campaign, promised policies that benefit everyone and thanked the trust placed in him. "You won't be disappointed, so don't be afraid," he said. The new leader also praised his father's government, but stressed that his presidency is not about the past but aspires to a better future. “I understand the seriousness of the responsibility that I have on my shoulders. I do not take it lightly, I am up for the task and I will do it,” he added.

During the day, more than 15,000 police, soldiers and coastguards were deployed in the capital, in which demonstrations against the new president were also held, called by victims of the abuses of the dictatorship during the dark years in which the law was imposed. martial (1972-1981). "This is a nightmare," Bonifacio Ilagan, a 70-year-old activist who was detained and tortured during the repression, complained today to the AP agency.

In a context of very damaging price rises for the Philippine economy, which is already highly affected by the pandemic, Marcos Jr. has made the fight against inflation, the impulse of growth and the increase of food production -particularly rice, a national staple food - their top priorities. In this regard, a few days ago he appointed himself temporary Secretary of Agriculture, a position from which he hopes to lead the review of the sector and strengthen the nation's food security.

In the longer term, the new leader is fully committed to continuing with the ambitious infrastructure program sponsored by Duterte, which includes the construction and improvement of highways, ports, airports, railway lines and telecommunications. With their development, they aspire to create jobs and attract foreign investment, although they are still exploring ways of financing that do not further inflate an already skyrocketing public debt.

At the international level, his greatest challenge will be to balance his relations with China, to which Duterte has become closer in recent years despite the territorial dispute that both countries have in the South China Sea, with their traditional ties with the United States, the former occupying power with which maintain important military ties.

With a more educated and professional profile than Durterte, Marcos Jr. came to power thanks to a disinformation campaign started years ago by his family and intensified during the election campaign to whitewash the family's political legacy. Today, many Filipinos believe that those years of dictatorship were a golden age for the nation, with economic development and international respect, and that Marcos Sr. legitimately amassed his fortune before becoming president thanks to his work as a lawyer. Crucial to his triumph was his alliance with Duterte's daughter, Sara Duterte, who guaranteed him the votes of the south of the country and made herself the vice-president.

Most Filipinos hope his presidency will be less violent and more predictable than that of Duterte, who leaves behind a trail of dead bodies with his war on drugs. Even so, many activists or religious fear that Marcos Jr. could use his victory to entrench himself in power and end any legal avenue of open claim against the past excesses of his family.

Likewise, there are also expectations to see what role his wife, Louise Araneta, will have in his presidency, whom many describe as more astute and professional than her husband. She has stated that she has no interest in joining the government, but is believed to be the mastermind behind the campaign that has brought her husband to power.