Maradona and the ineffable best play of all time 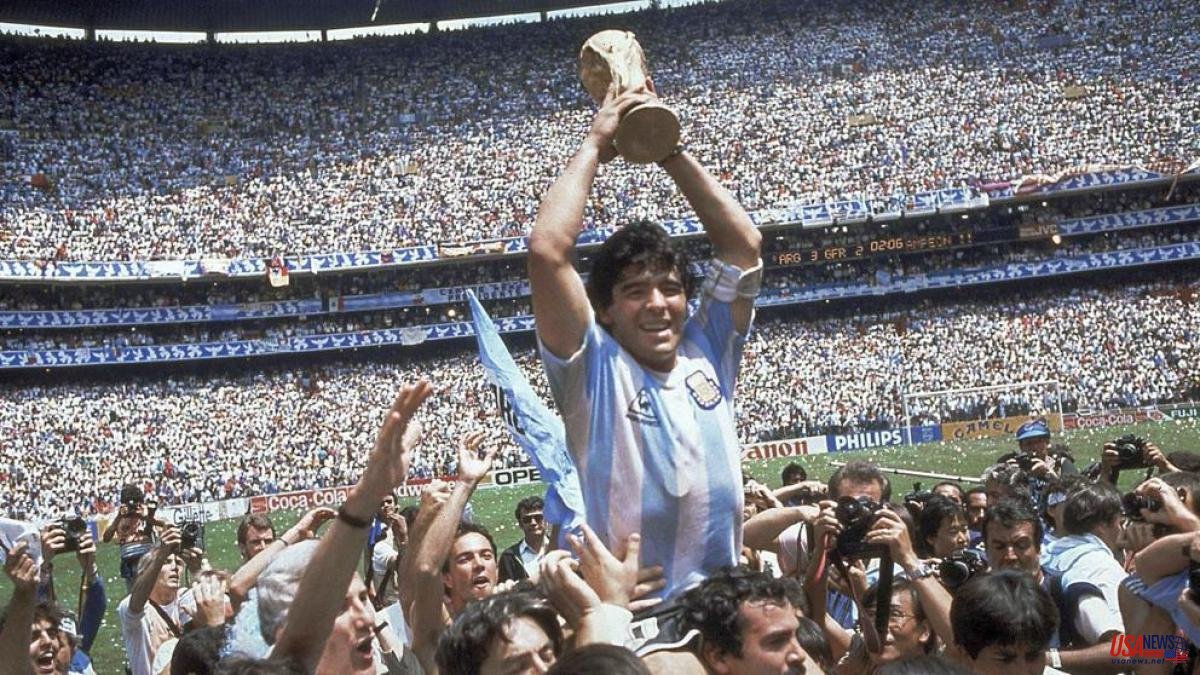 to him to him he is young

With these verses devoid of meaning, but full of sonority, begins the last song of Altazor or the parachute trip, considered the masterpiece of the Chilean Vicente Huidobro and one of the most recurrent examples of the disarticulation of language in avant-garde poetry in Spanish. from the beginning of the 20th century.

Although the inability of language to convey certain facts, meanings and feelings sometimes comes in the most unexpected way, by surprise, and sharing that unique moment transcending any poetics becomes the challenge that can mark a lifetime.

This is the story of the Uruguayan journalist Víctor Hugo Morales, who on June 22, 1986, by the work and grace of Diego Armando Maradona, became the narrator of the ineffable, of the unthinkable play and the impossible goal that marked the history of soccer. far beyond sports.

That day, Argentina faced England in the quarterfinals of the 1986 World Cup in Mexico. More than 100,000 people packed the Azteca Stadium in the Mexican capital to witness a duel marked by recent history. For the first time since the Falklands war, the two countries were facing each other face to face in a major sporting event without having yet re-established their diplomatic relations.

This caused the duel to heat up from Argentina, from where different political and social forums asked the team to make some gesture, such as wearing an allusion to the Malvinas on their shirts or demanding a minute of silence for those who fell in that conflict. From the United Kingdom, the Foreign Office urged the members of the English delegation not to make any kind of political statement.

However, the government of Raúl Alfonsín, which had questioned the celebration of the 1984 Intercontinental Cup between Independiente and Liverpool, avoided any interference after the experience of the 1978 World Cup, of which the military dictatorship had made a banner. And the shirt that Argentina wore was not even the official one.

The impossibility of wearing the first kit when exercising England at home and the refusal to wear the second that the firm Le Coq Sportif had made from a fabric unsuitable for high temperatures led the coaching staff to hastily search the local market for other kits of the brand to which shields of the Argentine Football Association were sewn and American football numbers were stamped on them. So there was no longer any debate about wearing any other symbol.

As for the fans, the fact that the Heysel tragedy, in which 39 fans died during the Liverpool-Juventus dispute, had occurred less than a year earlier made the prevention measures extreme and the bulk of the hooligans were demobilized by UEFA's ban on English teams playing in European competitions. The Argentine team, for its part, refused to finance the trip to the barras bravas – a common practice – after a proposal by Jorge Valdano with the support of Diego Armando Maradona, captain and leader of the team.

Already on the field of play, the intensity displayed by Argentina forced the English to bet on a contention strategy to entrust themselves to the counter and the success in front of goal by Gary Lineker, who would sign for FC Barcelona after that World Cup. However, the duel reached the break without goals.

It was after the start of the second period when the two incredible and fascinating plays took place, which have gone down in history as the Hand of God and the Goal of the Century. In the 51st minute, Maradona finished off with his hand, surpassing the goalkeeper Peter Shilton in the jump, which was intended to be a transfer to his goalkeeper from Steve Hodge. Despite the protest of the British, the Tunisian referee, Ali Bin Naser, conceded the goal.

In his narration, Víctor Hugo Morales did not hesitate to ensure that the goal had been with his hand. Until Radio Argentina's central studios in Buenos Aires told him that the goal, supposedly according to television replays, had been a header. In full disquisitions about the divine justice that that goal entailed, whether legal or illegal, magic happened.

In minute 55, Maradona took the ball in his own half to drive it to the rival goal and make it 0-2, beating five rivals and ending up beating Shilton again. Namely: Glenn Hoddle, Peter Reid, Kenny Sansom, Terry Butcher and Terry Fenwick. An action that Morales culminated in narrating with a monosyllabic "ta ta ta ta ta ta" that without saying anything said it all before calling the goal.

A Uruguayan, like Carlos Gardel, sang the most important goal for Argentina and probably the goal par excellence in football history, the work of a footballer who began to shine in Los Cebollitas, the humble team of Las Siete Canchitas de Fiorito, the muddy -or paddock- where the children and young people of the popular shanty town in the south of Buenos Aires dreamed of being stars.

In his incredible career towards glory he was accompanied by Jorge Burruchaga, the indirect protagonist of the action by preventing the English from focusing exclusively on Maradona and, in the end, one of the members of the '62 villa team, the replacement soldiers mobilized during the war. Although he did not get to fight in the Malvinas, several of his companions did – and perished.

The Radio Argentina journalist lost his composure, got excited and for a few seconds could not follow the story. He apologized for his "lack of professionalism", without being aware that he had also left for the history of sports radio journalism a few devilish minutes of narration that have marked everything he has come after. They are the ones we reproduce.

“He is going to play it for Diego. There you have it Maradona. Two mark it. Maradona steps on the ball. The genius of world football starts from the right, leaves the line and goes to play for Burruchaga... Always Maradona. Genius! Genius! Genius! Ta-ta-ta-ta-ta... Gooooool! Gooooool!

"I want to cry! Holy God, long live football! Goooooo! Diegooooool! Maradona! It's to cry, forgive me... Maradona, in a memorable tour, in the play of all time... Cosmic kite! What planet did you come from to leave so many Englishmen on the road? For the country to be a clenched fist screaming for Argentina?

"Argentina, 2-England, 0. Diegol, Diegol, Diego Armando Maradona... Thank you, God, for football, for Maradona, for these tears, for this Argentina 2-England 0"