Argentina had gone 36 games without losing and went to do it the least expected day. 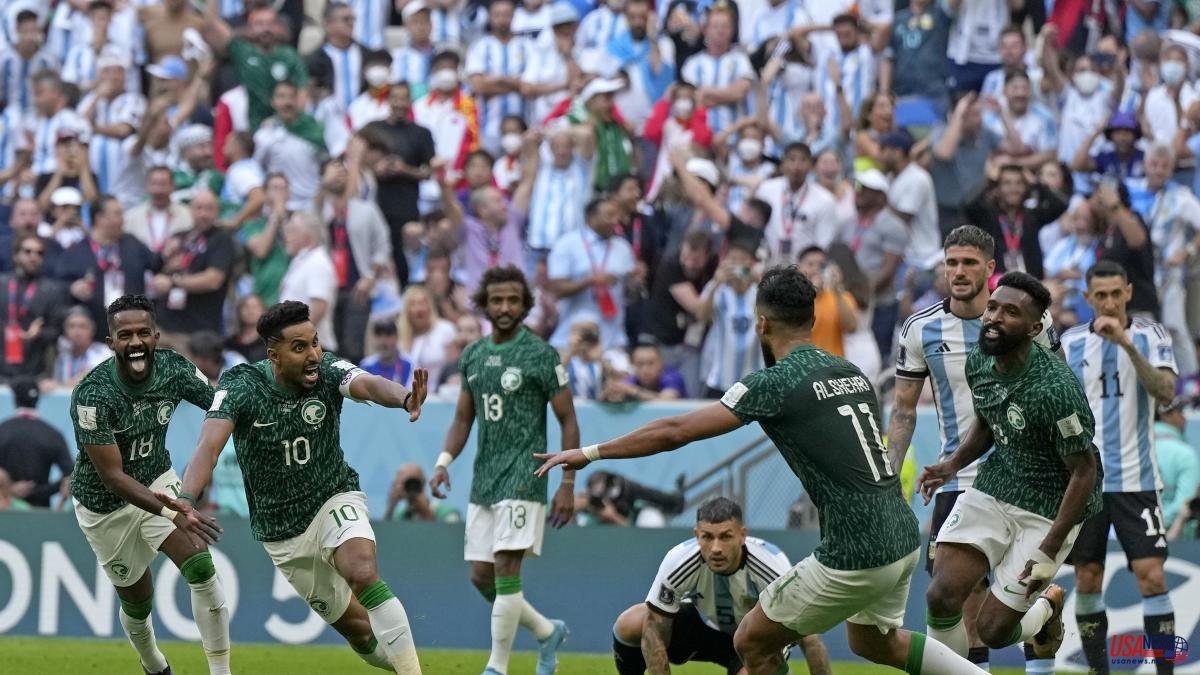 Argentina had gone 36 games without losing and went to do it the least expected day. The debut of a World Cup. The Argentines pretended that they had changed, pretending that they were relieved of the usual stress thanks to their last and liberating title in the Copa América. At the moment of truth, all his fears reappeared. It had all turned out to be a great performance, done so well that they even believed it themselves. Well no. Saudi Arabia, the 51st team in the FIFA ranking, was an extraordinary opponent for its courage. He refused to accept the script, which lasted until the first part with a 1-0 against manual (Messi, from a penalty), and ended up signing one of the most memorable surprises in the history of the World Cups.

The Saudis grabbed the second act by the neck and everything was transformed, it flew through the air. It was outrageous, a huge uprising, a kick to the odds, a tribute to the purity of football, where the weak team, as never before in other sports, can have options if they are brave and believe in themselves. That happened in the imposing stadium of Lusail, where the Arab resurrection was combined with the paralysis of the Argentine team, scared as a cat by the arrival of a trailer in the center lane of a highway. When he began to attack, it was already too late. Nervous, the minutes passed and the unforeseeable happened. Saudi won and Argentina lost. The Copa América effect is over. Welcome to Argentina forever. Difficult days await Scaloni. Doubts. To Messi, too. Until the next game: Mexico awaits Saturday. Strain.

It has been said. The first part was normal. Things happened, but usual in a theoretically unequal match. Messi, for example, took only a minute to appear. He didn't score from the start because Mohammed Alowais, a hero more than a goalkeeper, put out a prodigious hand down, as if he had thoroughly studied that classic ten shot towards the base of the post.

What the man couldn't do is stop Messi from a penalty. It was in the eighth minute, the result of an absurd help from the referee, the Slovenian Slavko Vincic, warned by the Dutchman Van Boekel from the VAR. The same duet, with the same roles, is the one that stirred up Barcelona in the last Inter-Barça. Abdulhamid and Paredes struggled in a corner, the latter dropped, and a maximum penalty was awarded. The FIFA bar, in moral and arbitration issues, is very sensitive. If that is a penalty, there will be ten in each game. They whistle that against Argentina and a quilombo breaks out, as they say. In the end it will be assembled the same, but due to other circumstances.

Messi, very plugged in to the point of scoring again in the 21st minute a goal that was disallowed, had once again made history with just 10 minutes of the World Cup in his legs by converting, along with Pelé, Uwe Seeler, Klose and Cristiano Ronaldo, the fifth player capable of scoring in four different editions of the World Cup. He will not be comforted by the data.

Infected by Messi's instinct, Lautaro scored two beautifully crafted goals, both also canceled for offside. One of them was hard to appreciate even reviewing the television images. It was for a piece of shoulder. What mathematical football they are leaving us.

But the second part came and everything changed. It has also been said. The two goals from Arabia were of an extraordinary bill. First it was Alshehri who, after a quick transition from his teammates, hit a shot close to the base of the post in which perhaps Dibu Martínez could have done more. Also the center-backs of the albiceleste.

Then, almost immediately, the unexpected number ten stood out, not Messi but the one from the other side. Aldawsari lived up to his number and, far from the goal and leaning to the left, looked for a goal and found it with a parabolic shot that slipped through the long squad. It will be one of the many in the World Cup.

Scaloni brought in Lisandro Martínez, Julián Álvarez and Enzo Fernández to pinch their players. And he began to attack Argentina, regretting not doing it sooner, very Simeonista style when the score goes wrong. If you have people to attack, why don't you do it before?

Messi tried with his head. There were other attacks, but Aloawis was immeasurable. He expects a statue in his country if he continues like this. To the Argentine players, another welcome if they don't reverse the situation much.

Incidents: match of the first day of Group C of the Qatar 2022 World Cup played at the Lusail stadium before 88,012 spectators according to the organization.