A low media profile was imposed yesterday at the meeting at the Elysée between the French president, Emmanuel Macron, and the German chancellor, Olaf Scholz. 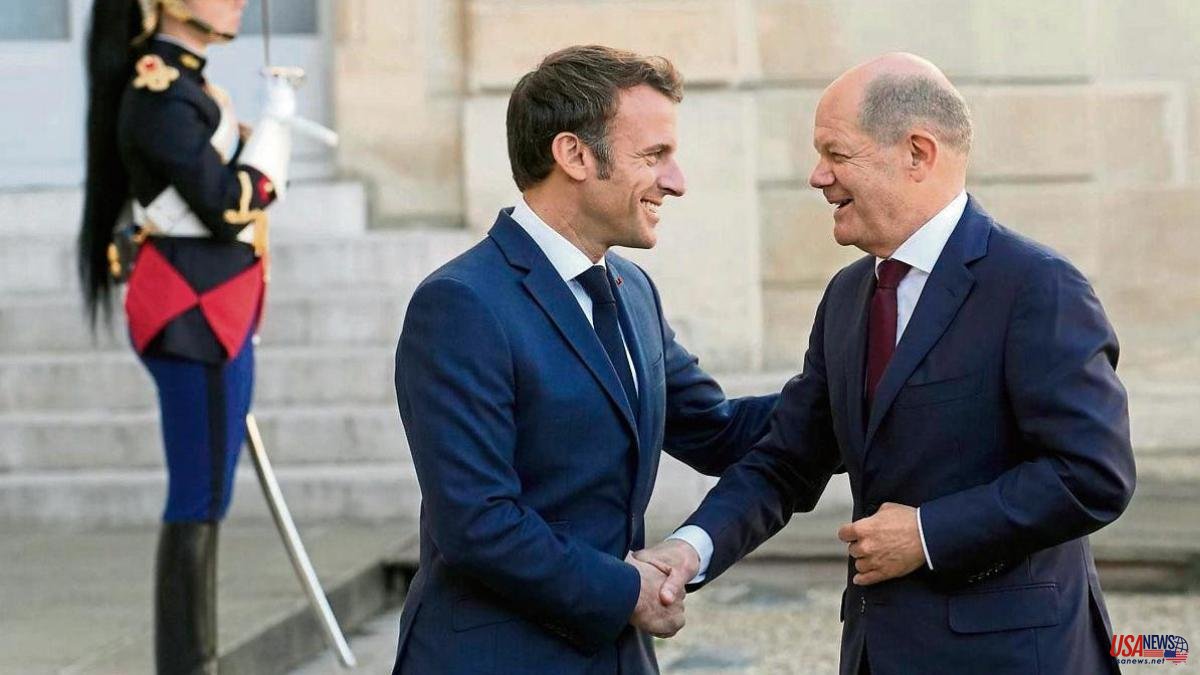 A low media profile was imposed yesterday at the meeting at the Elysée between the French president, Emmanuel Macron, and the German chancellor, Olaf Scholz. This strategy was a symptom of the delicate moment that the Franco-German relationship is experiencing, a consequence, in part, of the geostrategic earthquake of the war in Ukraine.

The two leaders were not willing to submit to uncomfortable questions that might have highlighted even more the serious differences between the two governments on energy, defense, EU enlargement, monetary policy, relations with China and other issues. Speaking in front of journalists was risky. There was no press conference or statements, something unusual.

Macron and Scholz saw each other for three hours to make up for the canceled full meeting of the two executives, which was due to take place last week. It was about making up and disguising the disturbing crisis of a tandem that has been key for the last seventy years to advance the European construction.

There were, yes, the diplomatic courtesies of rigor and the standard phrases of spokesmen to avoid referring to the thorny issues. Scholz posted a tweet in which he called the conversation "very good and important" about Europe's energy supply, rising prices and shared defense projects. According to the chancellor, “Germany and France are very united and face challenges together”. A German diplomatic source predicted that the bilateral dialogue will advance in the coming weeks. The Elysee sent a similar message and let it be known that the exchange had been "very constructive" and both leaders "evoked the Franco-German relationship in a spirit of very close work in the medium and long term." Working groups will be created to address the most controversial issues.

After World War II, the Franco-German relationship has not always been easy, but the will to repair any damage and move on has prevailed. That happened regardless of the political color of who ruled on each shore of the Rhine. There was too much at stake.

The reconciliation sealed by Charles de Gaulle and Konrad Adenauer in the 1963 treaty was the cement with which European unity was built. France and Germany, who had bled several generations in three wars in a row in a period of sixty years (1870-71, 1914-1918 and 1939-1945), decided to change the trenches for cooperation and common projects.

The shock caused by the Russian invasion of Ukraine and its serious economic effects have brought to the surface differences and priorities that seem difficult to reconcile. The French government has been irritated, for example, that Berlin decided to launch, without consulting its main partner, a gigantic aid plan of 200,000 million euros to help individuals and companies cope with the rise in gas prices. Paris considers that it unbalances the market and supposes a public aid to the German industry. The Germans, for their part, opposed the system to put a cap on the price of gas and follow the Iberian model, although in the end they gave in. In the energy issue there is another bilateral dispute of great depth, industrial and philosophical: France is committed to nuclear energy, while Germany is in the process of closing all its reactors because it thinks, after Fukushima, that the risk of a catastrophic accident is too high.

In the field of defense, Franco-German cooperation has been creaking for years, in part because Paris, a nuclear power, claims an autonomous position in the world arena, while Germany knows that it is dependent on the American protective umbrella. This is why joint projects such as the new European fighter aircraft and related systems (SCAF) do not arouse the same enthusiasm in Berlin as in Paris. To the anger of France, Germany has bought American F-35 fighters, instead of the French Rafales. And Berlin is also seeking a European anti-missile shield – but with the participation of the US and Israel – while Paris is planning an alternative one in alliance with Italy.

Another point of contention is Germany's desire to expand the EU rapidly to the east, bringing in more countries, but Paris fears that Berlin will further consolidate its economic hegemony on the continent. Finally, while Scholz was in Paris, it was confirmed that the German government had given the green light to the sale of facilities in the port of Hamburg to a Chinese company, a transfer of infrastructure that France considers a mistake. Scholz will travel to China shortly, a visit that Paris does not see with good eyes.

Yesterday's diplomatic Vaseline, therefore, will not be enough to repair a damaged Franco-German engine and which represents a great added risk for a Europe on the verge of global recession.