Lula disputes the presidency to Bolsonaro, hope of the global radical right

Whatever the outcome, Sunday's elections in Brazil, the world's fourth-largest democracy with some 150 million voters, are going to go down in the history books. 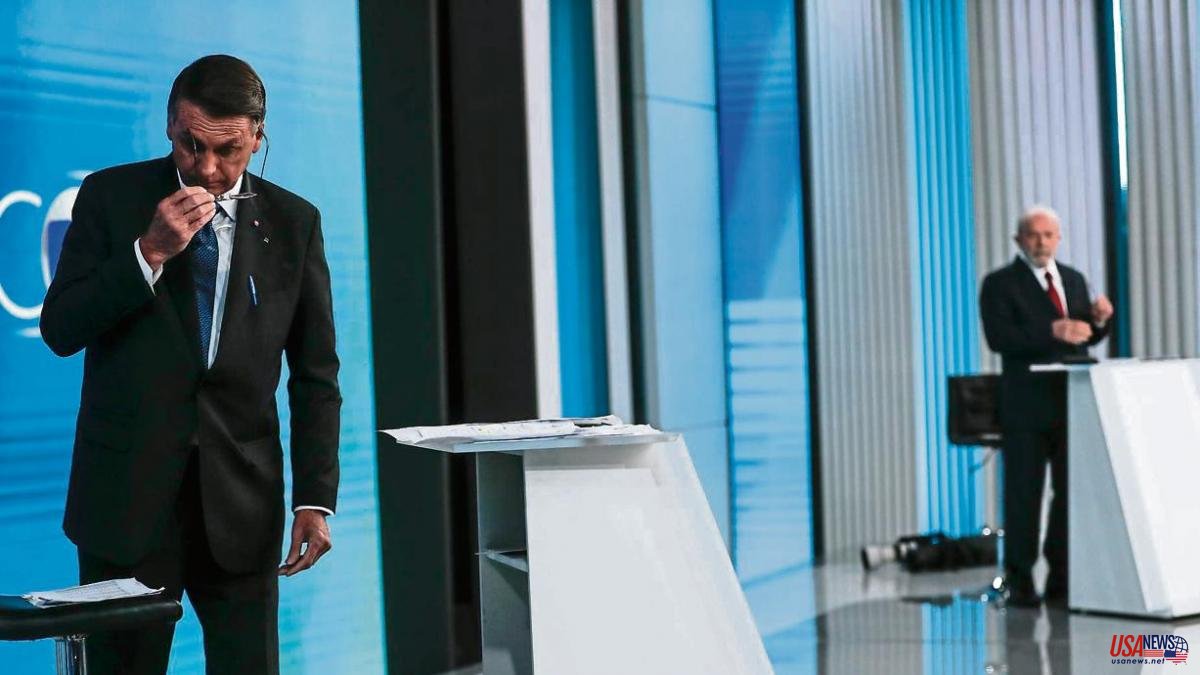 Whatever the outcome, Sunday's elections in Brazil, the world's fourth-largest democracy with some 150 million voters, are going to go down in the history books. Not only from Brazil and Latin America, but from the entire planet. If, as the polls indicate, the historic leader of the Workers' Party (PT) Luis Ignacio Lula da Silva, winner in the first round by 48% to 43%, prevails at the polls, it will be material for TV movies. Hollywood. Less than three years ago, Lula still lived in a 15-square-meter dungeon where he would remain for more than eight months, after being sentenced, without much evidence, for an alleged crime of corruption.

“We are going to concert the country,” Lula said in the last televised debate on Friday. She recovered the message of hope after the decision of the person in charge of social networks of the PT, the Machiavellian André Janones, to give "like for like" in the false news war that has characterized this campaign. "You will be happy again (...) you will eat meat again," added Lula -Brazilian president in the years of economic boom and social achievements between 2003 and 2010- in reference to the 39 million Brazilians who now suffer serious food insecurity.

On the other hand, if the current president, Jair Bolsonaro, 67, wins, a political earthquake will be unleashed with a planetary shock wave. A close ally of Donald Trump, Bolsonaro is already the great hope of the new radical right in many countries. During his speech in Rio de Janeiro on Friday, the only journalist on the podium held a sign with the word Gettr: the social media outlet of Trump adviser Jason Miller. Trump released a video on Friday in which he urged Brazilians to vote for Bolsonaro and called Lula a "radical left lunatic."

A Bolsonaro victory would allow the president to complete the assault on the institutions of Brazilian liberal democracy created just over two decades ago at the end of the military dictatorship between 1964 and 1988.

The president launched harsh attacks against Lula in the debate, calling the former left-wing president a "thief" and a "drug trafficker's sidekick." In a nod to evangelical voters, up to a third of the electorate, he urged Lula to "exorcise himself to stop lying." At the end of the debate, the president was congratulated by Sergio Moro, the controversial judge of the Lava Jato investigation that jailed Lula in 2018.

After following in Trump's footsteps with repeated warnings about the possibility of electoral fraud, Bolsonaro assured at the end of the debate on Friday that "whoever has the most votes wins, this is democracy."

The statement was interpreted on the Rede Globo channel, which broadcast the debate, as "the first time that Bolsonaro accepts a possible defeat." But the truth is that in the sophistic language of the president, the apparent commitment to democracy does not prevent false accusations of fraud on Sunday night, Luiz Eduardo Soares, an analyst and former adviser to Lula, warned La Vanguardia. In the end, as happened with Trump, Bolsonaro can maintain that he has more votes but they have not been counted, in the Brazilian case, due to non-existent failures in the electronic voting system.

Bolsonaro's campaign distanced itself on Friday from radical Bolsonarist groups that called for the postponement of the elections after the Supreme Court's decision to reject dozens of Bolsonarist propaganda radio spots for being false news. But a narrow margin of victory for Lula will create possibilities for a Trump-style reaction.

A disputed result cannot be ruled out in a country sharply divided between a viscerally anti-Bolsonaro bloc and another viscerally anti-Lula. “Where I live is half for Lula, half for Bolsonaro,” said Lucas Freitas, a young musician who lives in the suburb of Rio, Duque de Caixas, where both Bolsonaro and Lula have held rallies during the campaign.

Only the final of the Copa de Libertadores, played between Flamengo de Río and Atlético de Curitiba yesterday, managed to unite the city for 90 minutes with thousands of Lulista and Bolsonarista fans going to the bars to watch the game dressed in the red and black Flamengo shirts. .

Instead, the Brazilian team's uniform has become another symbol of division since Bolsonaro - with the support of Neymar - urged his voters to go to the polls in yellow shirts. “The jersey was hijacked in 2013 with the demonstrations against (former president ousted in 2016) Dilma Rousseff,” Juca Kouri, the veteran sports journalist, said in a phone interview.

Visibly nervous in the debate, Bolsonaro caused a stupor at the end of the debate by committing a Freudian slip when he said goodbye saying: "Thank God very much and if it is his will I will be ready to fulfill a new mandate as a federal deputy." Bolsonaro was a member of Congress 28 years before his unexpected victory in the 2018 presidential elections.

If he wins, Bolsonaro has not hidden his plan to assault the independence of the Supreme Court, the main obstacle to the implementation of a radical right-wing plan promoted by the ultra-conservative agenda of the powerful evangelical mega-churches.

Without the Supreme Court and other institutions, the risk of involution will be great. "These elections are a plebiscite to decide between the democratic republic and Bolsonaro's proposal to create another regime, a recycled version of the 1964 dictatorship," political analyst Christian Lynch warned yesterday in the Folha de Sao Paulo newspaper.

It is not a problem only for Brazil. “I am not sure if Brazilian democracy would survive four more years of Bolsonaro”, said Beto Veríssimo, the founder of the Environmental Defense Institute in Belém in a conversation with La Vanguardia. "But I'm pretty sure the Amazon wouldn't survive."