Luka Doncic, the smile of the present and future of basketball

It's easier for anyone to do their job well if they enjoy it. 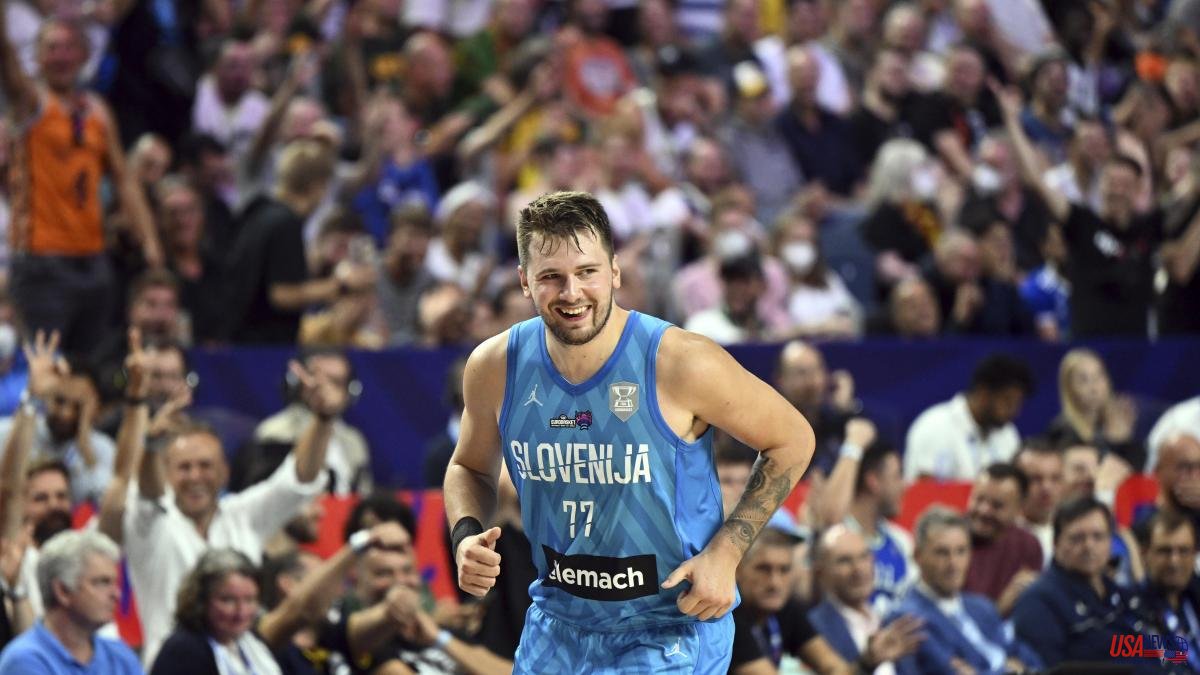 It's easier for anyone to do their job well if they enjoy it. Luka Doncic always plays with a smile, and that explains everything. Having a basketball in his hands is reason enough for him to be completely happy. With it he can perform impossible tricks, overcome the limits of the human, play with the minds of his rivals. He alone (or almost) was enough to win all of France. It didn't matter what they did to try to stop it.

Vincent Poirier opened his head with an elbow, he also had to go out to bandage two fingers of his left hand. A gap or a couple of immobilized fingers were not going to stop Doncic in his quest to lead his country to the Eurobasket qualifiers as group leader. To do this, he needed to score 47 points, more than half of his team's total and the second best mark in the history of the competition. And he did it without ever losing his smile. His, which is that of Slovenia and that of all basketball.

Slovenians and French faced each other in a duel that, perfectly, could be an early final. They are two of the favorites for the title, with radically different styles and pieces, but just as dangerous. Slovenia prefers speed, fast breaks on the counterattack, high tempo, chaos. When he has to attack statically, the strategy is clear: ball to Doncic, and the others to facilitate the paths to the basket as much as possible. France, for its part, is a much more choral team, which depends less on individuals and opts for mobility without the ball and fast circulation. In addition, he is far superior in the paint, with forces like the best defender in the NBA, Rudy Gobert, or Vincent Poirier.

The current champions, whose effectiveness in the midst of chaos also depends a lot on the streaks and the emotional aspect, started very badly. The Gauls, always orderly and with slower and more elaborate attacks, opened a great partial in the first minutes. So, Doncic didn't seem entirely comfortable. Even in some shots, he looked more serious than usual. Bad sign for the Slovenians. However, he did not take long to wake up and his smile was drawing on his face with each triple after a step back or with each two plus one in penetration.

The first two quarters were an intellectual display from the Dallas Mavericks point guard. Slovenia did not have Mike Tobey, the only midfielder capable of pairing up with Gobert; and Luka's companions in the backcourt and on the wings, such as Goran Dragic, Klemen Prepelic, Edo Muric or Vlatko Cancar, did not seem to be successful either. Luckily, Doncic has his privileged mind for basketball as an ally.

As he confessed in an interview, behind each of his movements there is an exhaustive analysis of the rivals' disposition and their possible actions in each play. He first used the blocks of his teammates to match up with Poirier and get him out of the zone, taking advantage of his technical superiority and his greater speed to generate points, either from the perimeter or through penetration. Once France adjusted their defense to avoid these superiorities, Doncic detected another crack through which to sneak: Gobert had already had two fouls and could not charge more before the break. In this way, he decided to be more aggressive and look for it in the rim to score easily or force the personal and take out the best rival player of the match.

As if his intelligence was not enough, when the rival defense was able to neutralize his plays, the Slovenian leader rose above anyone and proved to be in a state of grace. Not only difficult baskets entered, but also impossible ones. Memorable is the three-pointer he hit at the buzzer in the second quarter. With Gobert and Fournier on top, listing more and more and with the shot clock under a second, he took a shot supported on one leg and with only one hand from another planet. The best play of the Eurobasket so far.

He continued his scoring recital in the second half, with the score tight, but with the feeling that with him on the court (and he was almost the entire game, he only missed one minute and 16 seconds due to his blow to the head and his problem on the fingers) it was impossible for Slovenia to escape victory. He finished with 47 points, shooting 15-for-23 from the field, 6-for-11 on 3-pointers, 7 rebounds and 5 assists. He did not reach 50 because his teammates improved and freed him a little from all the offensive load.

Even so, he set the second best scoring mark in the history of the Eurobasket, only behind the 63 of the Belgian Eddy Terrace in 1957. He also became the first player to score more than 40 points in an Olympic Games match and one of Eurobasket, as well as the one in which he endorsed the French team with the most points in a single match. Record afternoon for a 23-year-old boy called to dominate the world of basketball for the next decade, always with a smile on his face. His next rival: Belgium, in the round of 16.