Luis Enrique, to Qatar with his scaffolding, his screen and 3,000 kilos of luggage

A scaffold, the walkie talkie with which Luis Enrique communicates with the players, the loudspeakers that are placed on the back of his pupils so that they listen to his instructions and a giant screen to be able to show them in real time and with better image definition what What do you want from them? The entire technological pack traveled stored in two containers to Doha a week ago. 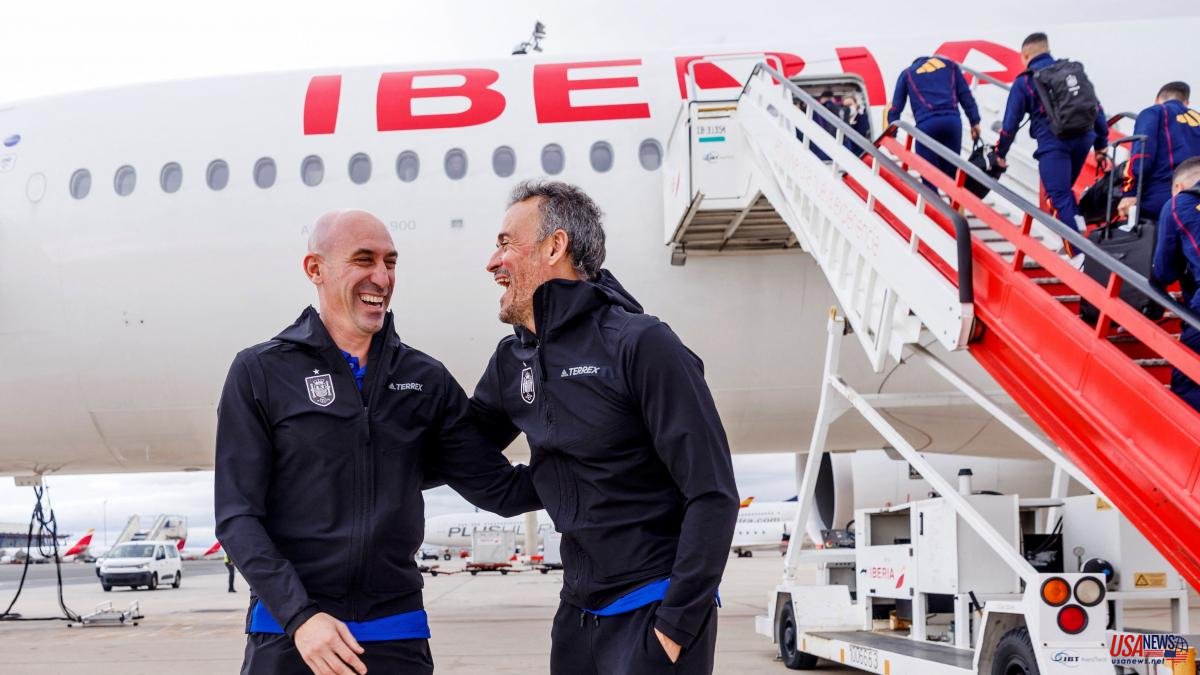 A scaffold, the walkie talkie with which Luis Enrique communicates with the players, the loudspeakers that are placed on the back of his pupils so that they listen to his instructions and a giant screen to be able to show them in real time and with better image definition what What do you want from them? The entire technological pack traveled stored in two containers to Doha a week ago. By the time the team lands in Qatar at dawn on Friday after passing through Jordan, everything will already be installed at the University of Qatar, a space that it will share with the Argentine team in its more than 25,000 square meters.

These containers also include the computers and computer equipment of the selection staff. Among them the computer and the headphones with a microphone with which Luis Enrique will communicate with the fans. “I record this video to announce that I have become a streamer. My intention is to stream while we are in Doha. We arrived on the 18th in the morning, so that same day I can start. I will tell from a particular point of view, mine and that of my staff, establishing a more direct communication without filters, spontaneous and natural, interesting for everyone. It is an idea that starts out in a crazy way, but it can be interesting to start a direct relationship with fans”, the coach revealed in a video that went viral on the different social media platforms.

To communicate with all of them, Luis Enrique has already created his Twich channel, which in 48 hours has more than 82,985 followers. The coach, with the humor that characterizes him, stated that he has "a bit of improvement, both to decorate the profile and in the lighting". Everything will be ready in Doha.

Meanwhile, the plane that traveled with the entire expedition that will first pass through Amman to play the friendly against Jordan today included luggage that weighed about 3,000 kilos with 90 packages, among which 25 trunks with all kinds of clothing stand out. Kits for matches and also for training with sleeveless shirts to withstand high temperatures. They also transported a minimum of two pairs of boots for each player - some internationals asked for four - and even packed winter clothing such as anoraks in case they need them on the move. "We don't think we're going to need it, but we can't afford to do without anything," sources from the Federation told La Vanguardia.

The same sources point out that the nutritionists' material has also been transported in this second shipment. Of course, no type of food has been included in either of the two shipments. Iberian hams, pork and any derivative have been ruled out due to the ban on eating them in Qatar. "It will be replaced by another type of meat such as beef or duck," they point out.

In order to control the points of sale of the foods most suitable for the international diet, both the cook, Ricardo Vargas and the meter traveled to Doha last Thursday and are already waiting for the selection at the university, located in the Al Dafna district, approximately 16 kilometers from the city center.

The University of Qatar is already waiting for you. It has everything necessary for the team to train. 30 adaptable sports fields, two Olympic swimming pools, a gym with sauna and Jacuzzi areas, rehabilitation areas, hydromassage, technical and meeting rooms; two soccer fields with artificial lighting, which will allow training at night with better temperatures, and a soccer stadium with a capacity for up to 10,000 spectators. The university is the main institution of higher education in the city. It houses ten faculties with 48 bachelor's degrees and nine doctorates, and it is estimated that more than 1,500 students study there and some 800 teachers work.