Luis Enrique: "Praise weakens you, we are not going to fall for that"

After the biggest win in the history of Spain in a World Cup, Luis Enrique has appeared full of energy before the press. 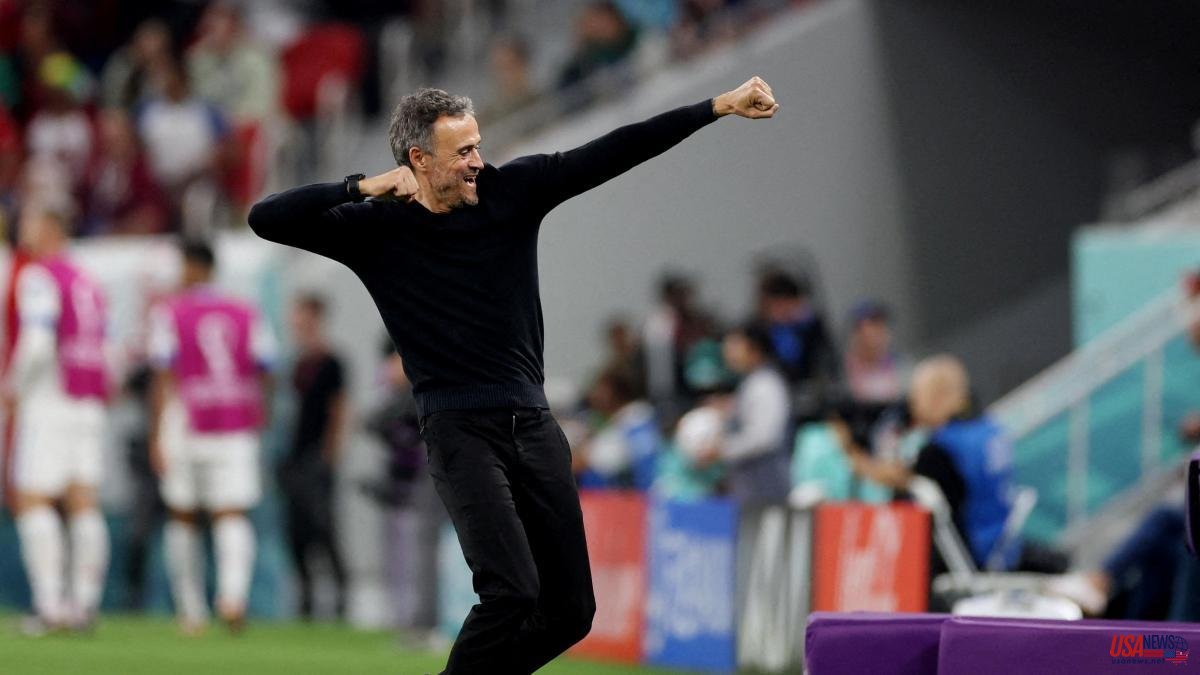 After the biggest win in the history of Spain in a World Cup, Luis Enrique has appeared full of energy before the press. "When things go like this, soccer becomes a wonderful sport," confessed the Spanish coach, who praised his team's play in their debut in Qatar, beating Costa Rica (7-0). "We have had control at all times, which is what we wanted", he has sentenced.

Against a "rubbery" rival, Luis Enrique believes that Spain has been "exceptional" in almost all aspects: "We have been exceptional in handling the ball and finishing. Our only objective in the match was to dominate the game and for that you have to have the ball, and we have also been exceptional in possession and pressing”. “The eleven have been superb, but we still have room for improvement”, confessed an always demanding Luis Enrique who added: “Praise weakens. We are not going to fall for that. We are going to try to play every game in the same way”.

Asked about Rodri's role today as a centre-back, he explained that he believes that "he meets all the conditions of a centre-back, but he is also a top-level pivot". “He is a very versatile player, very complete. He suits us very well ”, he has assured before answering that for the next game there will surely be changes:“ Those of you who know me well know that I am not one to repeat. I'm not going to give clues but I don't think I've ever repeated an eleven, I probably won't. If we play seven games, we're going to do it together."

He also referred to Alejandro Balde's debut: “The perfect circumstances have arisen, we have to take care of Jordi, who has been superb and has left the field to an ovation, like 'Busi'. It was the best time for him to debut. It is a plane and he has taken advantage of every minute”. And he has not reserved his praise for Marcos Alonso either: “He is at a full level of confidence, today he has been superb. He is a top player and I am very happy ”.

Despite the praise, the coach has insisted on the room for improvement that the squad has: “There are players who can still play better. There are always things to improve, but the important thing is that the idea of ​​what we want to capture comes out, whatever the score".

After the rout against Costa Rica, Spain's next rival will be Germany, which will be touched after a surprising defeat against Japan (1-2) in its debut: "Now it's time to recover because a Germany in need arrives and we want to go through as first in the group ”, stated Luis Enrique.

The one from Germany was not the only surprise on the first day. Argentina also lost in their debut against Saudi Arabia. But Luis Enrique has explained that he has not warned his players of the dangers of leaving confident: “I have done quite the opposite. The debut generates tension, if I press, I'll get them to overactivate, and that's not good. I have done the opposite, relax them. If I hadn't done it that way, I don't know if we would have seen the same match”.