Loneliness and fear in Kharkiv villages liberated from occupation

The streets of Ruska Lozová are deserted. 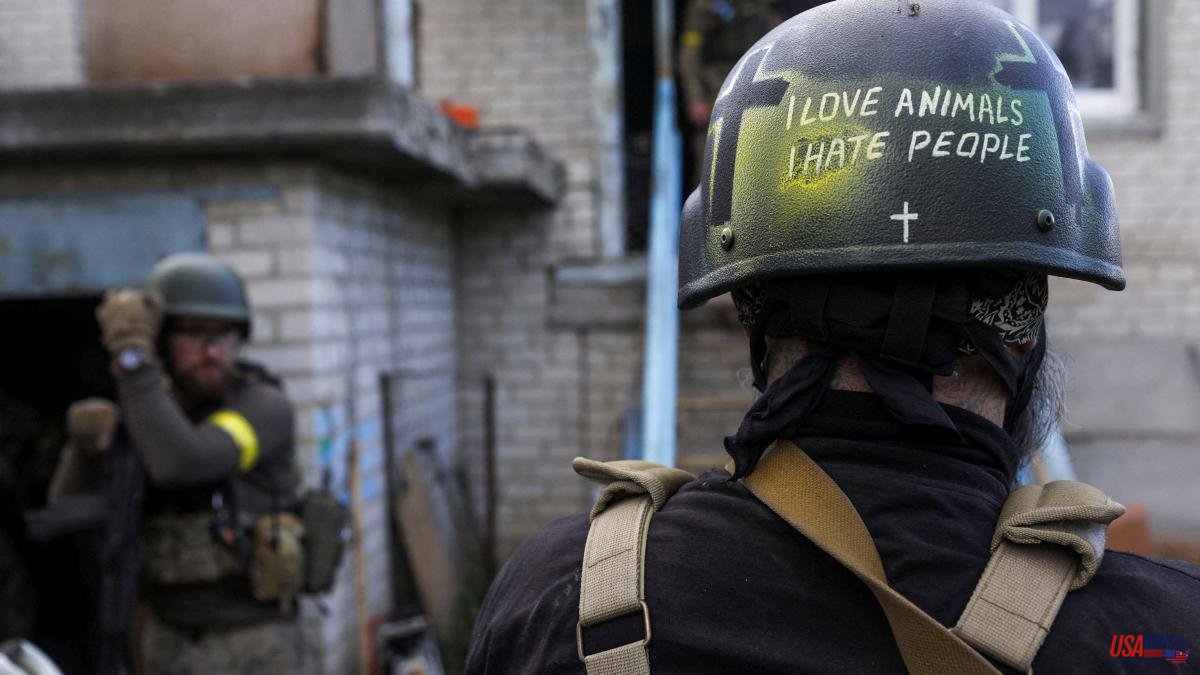 The streets of Ruska Lozová are deserted. Only dogs and cats abandoned by those who fled after the invasion appear in home gardens adorned with spring wildflowers. This rural town less than 20 kilometers from Kharkiv, Ukraine's second largest city, was controlled by the Russian army until three weeks ago. A few members of the territorial defense patrol, but the explosions of the artillery remind that the war is near.

“It's very dangerous… Very dangerous. There are houses burned every day, my house was attacked. This one, this one, and this one,” explains Max, a local man who visits residences inhabited by people who haven't left, who have lived under the invasion in their basements. His mission is to feed them, just like he does with the animals, which are many. When he started doing this volunteer work he thought there were about a hundred people in the town who were hiding in the cellars, normally used to store preserves for the winter. But over the days many more people have been found than he had ever imagined.

“They are very afraid; Many haven't been out for weeks. And every day we find more, more and more”, explains this man, who warns of the danger of drones. They fly over at all times and the inhabitants do not know if they belong to the enemy. Russians and Ukrainians use these drones to detect the positions of the opposite. Buzzes appear every so often. "This is ours," says one of the members of the territorial defense after confirming it with the base. The explosions in the distance are so strong that they shake the ground.

One of Max's two companions notices that his work is limited to the streets of the lower part of town; the situation is not at all clear in other sectors above. On the corner, a charred car recalls how unstable the situation is in the twenty towns retaken by the Ukrainian army in recent weeks. Although the army has increased the pressure by driving the Russian troops back (caravans of burnt-out vehicles are witnesses), their artillery can still do a lot of damage. So do separatists who infiltrate and pose as Ukrainian volunteers.

The little Lada, which has a large white painted Z, has been dragged a few meters higher from the place where it had been reached by fire hours before. The car would have taken advantage of the darkness to enter the town, but the Ukrainian defense found it. The biggest concern for the authorities is knowing the whereabouts of their crew members; There's no trace of them. They can be hidden in any of the houses, many of them abandoned. And many others looted, as explained by one of the few neighbors seen on the streets. When they were in the village, the Russian soldiers occupied some of the empty houses. When they left, they took practically everything with them.

Life under the dictatorship of the occupants was a government of terror, explains this elderly man who was once arrested and taken with his son to a nearby town. They put them in a courtyard where there were many corpses and told him that the same thing could happen to them if they saw them again.

Max explains that in those weeks they had to clandestinely evacuate many men who were in danger of being killed and hide their children; they feared they would be recruited. “I was attacked twice when I was trying to get them out of here,” adds this man, whose car was destroyed a few days ago with a mortar. But he says that he will stay as long as there are people who need him, old people who cannot move. The Russian border is only 16 kilometers away, "but I will stay and continue doing the same." He has red eyes and looks exhausted. He has black knuckles and calloused hands. At one point he begins to cry, covers his eyes with his forearm and turns. He doesn't want them to see him cry. "It's dangerous, very dangerous."