London becomes a fortress for the funeral of Elizabeth II

"I'm not afraid of death, I just prefer not to be there when it comes," says Woody Allen with his sense of humor. 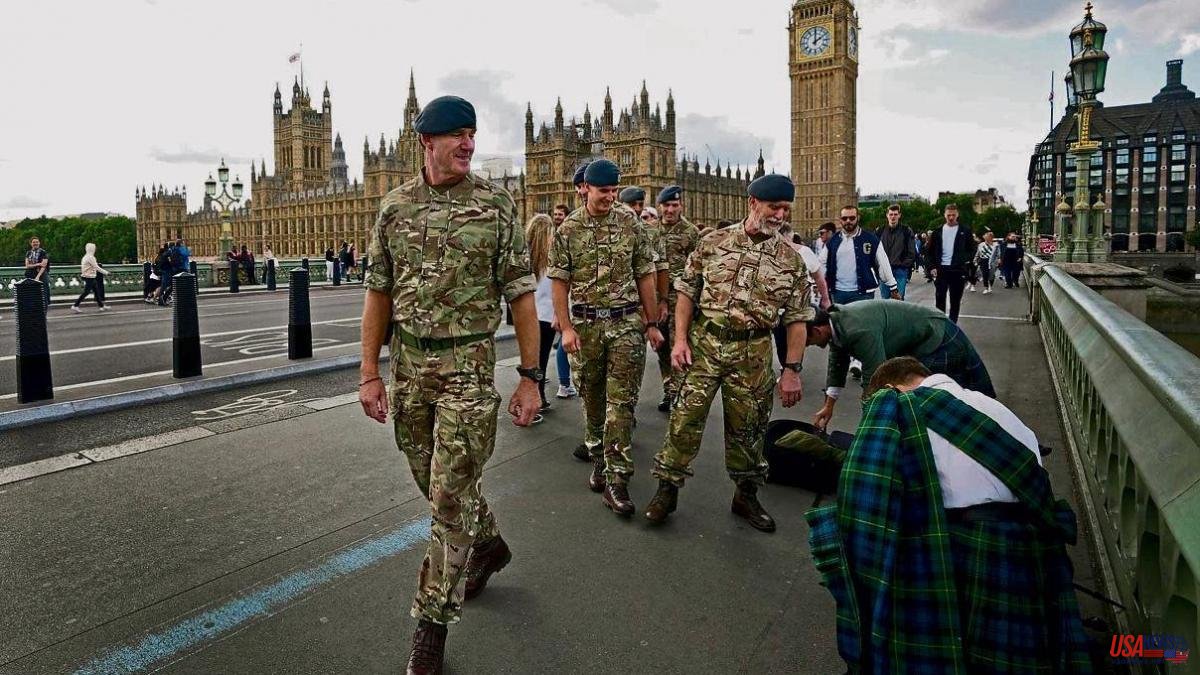 "I'm not afraid of death, I just prefer not to be there when it comes," says Woody Allen with his sense of humor. But this funeral London is not for jokes, with the body of Elizabeth II in Westminster Hall for three days, the forecast of a million people in the street for the largest state funeral since 1965 to bid farewell to Winston Churchill, five hundred dignitaries and more than ten thousand policemen. The jokes, at the risk of each one.

The English capital, beyond the tourist center, is a collection of towns each with its main street, its parks and its churches. And there have always been many Londons, richer and poorer, whiter and more colored, older and younger. But now there are above all two well differentiated. One, the one seen by visitors and shown on television, delivered into the arms of history, traditions and liturgy, in which the exchange of a queen for a king stirs up nostalgic memories of British imperial glories and greatness, and people queue for up to fifteen kilometers and twenty-four hours to parade a few seconds in front of the coffin containing Isabel's body. Each person is a different script, and there are those who do it out of genuine mourning, or out of deference to the monarchical institution. But most of it is for “being there”, for feeling like extras on the set of an episode of The crown.

The second London, the one that these days only exists for the locals but is not perceived in the rest of the world, is more irreverent and republican, more concerned with electricity and gas bills than with the transfer of crowns, with banks of food instead of that imperial crown of 2,868 diamonds, 269 pearls, 17 sapphires, 11 emeralds and 4 rubies displayed on the coffin in Westminster Hall. It is a London that also respects the queen, but considers it an exaggeration, as things stand, that political activity is paralyzed for more than two weeks, that Parliament is closed and Prime Minister Liz Truss dedicated to everything but solve the country's problems (his only decision has been to remove the cap on bonuses charged by bankers). That Monday, the day of the funeral and despite the looming recession, has been declared a holiday, supermarkets, coffee chains, cinemas, cemeteries, gyms and museums will be closed, air traffic over Heathrow will be closed suspended for a quarter of an hour, the garbage will not be collected and no one can be buried, except Isabel. And that Carlos III himself said that he wanted it to be a normal day. But the British, despite the fact that Henry VIII broke with the Vatican, may also be more papist than the pope (an expression that does not exist in English).

In this London, the most real, there have been no bobbies in the streets for many years, and if they rob you or break into your house, bad luck. In fact, there are no police stations, sold to speculators to build flats. Now less than ever, with all the agents dedicated body and soul to the London Bridge operation, the enormous security device put in place from the death of the queen until after her funeral. Not only officers from the neighborhoods have been sent to the center, but also those from other regions, along with thousands of soldiers and anti-terrorist units.

In a London, life goes on the same, and the only signs that the longest-living queen in the country's history has died are photos of her, wearing a black crape and the date of birth and death, at commuter stations and stops bus station, and some pubs, lest the clientele be offended. In the other London, the one that looks like a Netflix movie studio and hundreds of millions of people are watching on television, access to the queue to parade in front of the queen had to be suspended for a few hours, given the number of people willing to spend the night outdoors, with all imaginable discomfort and even more, to be a minimal part of a global event. Except the deputies and characters like David Beckham, with VIP treatment.

In central London, Big Ben, Parliament, Buckingham Palace and Westminster Cathedral, some streets are already closed and tube stations will be closed on Monday, specially trained dogs sniff for explosives, and if you have Binoculars (or lynx sight) can easily spot snipers on the rooftops of strategically placed buildings. "Security and ceremony are two concepts that don't go together too well," says a former Scotland Yard director.

This is the most complex police operation in national history. The one for the Olympics ten years ago, for example, could have been prepared far in advance and rehearsed as many times as it wanted, while now suddenly there is the need to attend to the security of five hundred leaders, with US President Joe Biden at the helm , and the royal family moving around in carriages and open cars. And with around 750,000 people on the street, all of them potential terrorists and victims at the same time, who do not have to go through any metal detector machine. His surveillance will be in the hands of closed-circuit cameras and plainclothes agents infiltrating the crowd. "It's a nightmare," says a veteran of the Metropolitan Police, "whichever way you look at it. And not only because of the danger of an attack, but also of thefts, of stampedes, of incidents of any kind”. The spirits are on the surface and there have already been verbal clashes between traditionalists who bow their heads as the funeral processions pass, and others (the majority) who are not so traditional and record the scenes with their mobiles.

At first foreign leaders were asked - yesterday they began to arrive - to travel to the funeral in buses enabled for the occasion. But Biden insisted on doing it in his armored limousine under the protection of four hundred Secret Service agents, and the plan fell apart.

There are those who have compared the coverage of the BBC with that of North Korean television after the death of Kim Il Sung (days and days of reports dedicated to Isabel II and Carlos III, presenters dressed in mourning...). But even if it is an exaggeration, dissent from political correctness is not well seen, and the police have gone too far in arresting people simply for uttering phrases such as "this is not my king", in an attack on freedom of expression. expression.

Elizabeth II died on D-day. Today is D-day plus ten, and the funeral will be D-day plus twelve. A goodbye not long but endless.