It is not the first meeting held by the boards of trustees of both institutions but, this Monday, those responsible for the Gran Teatre del Liceu and the Teatro Real de Madrid have gone further than ever in their rapprochement and collaboration agreement, since in order to give visibility to their good deal they have announced a joint subscription for the opera-loving public. 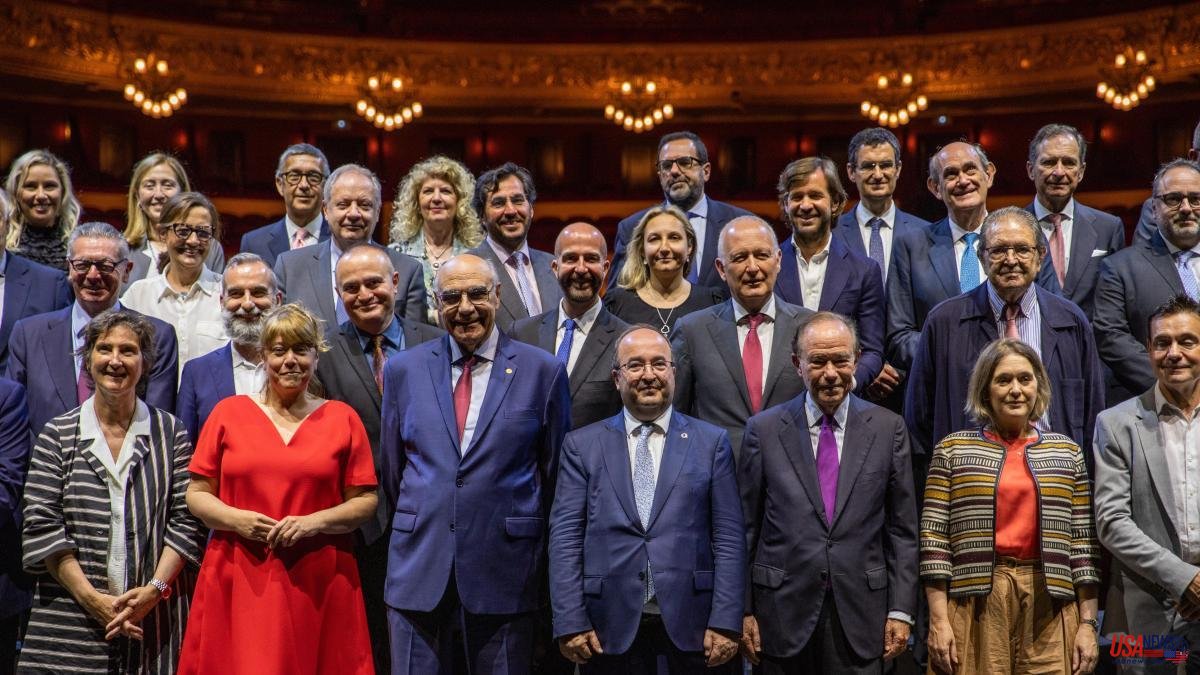 It is not the first meeting held by the boards of trustees of both institutions but, this Monday, those responsible for the Gran Teatre del Liceu and the Teatro Real de Madrid have gone further than ever in their rapprochement and collaboration agreement, since in order to give visibility to their good deal they have announced a joint subscription for the opera-loving public.

There will be four titles included next season, two from each house. The Liceu incorporates Il trittico by Puccini, in the performance on December 3, and Verdi's Macbeth with a montage by Jaume Plensa, in the performance on February 25. While the Real brings Nixon in China by John Adams, on April 30, and IlTurco in Italia by Rossini, on June 3. The season ticket, in any case, only includes weekend performances and at the moment only one hundred units will be issued, that is, 400 tickets for four opera titles.

"It's not just about the public from Barcelona traveling to Madrid and vice versa -said Gregorio Marañón, president of Real Madrid-, but about all of Spain joining in the experience".

This third meeting (in 2008 it was held in Barcelona and in 2017 in Madrid) was attended by the Minister of Culture, Miquel Iceta, who, when asked by the press, once again reaffirmed that "I will not run for mayor of Barcelona, There is already a candidate and, as the Americans say, when something works, you don't have to fix it".

Also in attendance were the Regional Minister for Culture, Natàlia Garriga, and her counterpart from the Community of Madrid, Marta Rivera de la Cruz, plus the deputy mayor of the Barcelona City Council, Jordi Martí, the general secretary for Culture and Sports, Víctor Francos, the Undersecretary of the Ministry, Eduardo Fernández, and the Director General of Inaem, Joan Francesc Marco.

The reasons for the meeting were reflected in a series of upcoming co-productions between the two theaters: Evgeni Onegin by Tchaikovsky, Jenufa by Janácek, and La fanciulla del West by Puccini, led by the Liceu, and the already premiered Rusalka by Dvorák, plus Maria Stuarda by Donizetti and Bellini's La sonnambula, led by Real. Dido

For Salvador Alemany, president of the Liceu, this is one of the "important acts" of the celebration of the 175th anniversary of the theater on the Rambla. "Our success, that of each of the theaters, will be based on collaboration, not competition." To which Marañón added that "we have really established an oasis of coexistence, which is enormously fruitful for the two institutions and, of course, for the citizenry. We are on this path and we are willing to continue on this path".

For Iceta it is "the demonstration that it is possible to cooperate, that everyone wins". "From a cultural point of view, it is unbeatable and, therefore, it is worth continuing to work together and do many things hand in hand, because we all win."

In his opinion, it is an "intelligent bet" and he has opined that the "sum, the synergy between Madrid and Barcelona, ​​far from clouding or disfiguring, enhances the value of each of the cities and their cultural offerings". "I hope that it is one more step and that there are many that allow us to offer them to tourism, both from all over Spain and from all over the world, with an offer that, without a doubt, is very powerful and complementary", he added.

It was as a result of the meeting of both boards of trustees in the Real, in 2017, when it was agreed to do it periodically, although the pandemic has further lengthened the interval. The will is to resume a certain periodicity for this meeting, which has precisely coincided this time with the presentation of the 2023-2026 strategic plan to the Liceu Executive Commission.

A plan that, according to Alemany, "consolidates our musical, artistic, technical, commercial and administrative structure", with a view to the future. The president of the Liceu referred to sponsorship and private patronage as a fundamental element to carry out the LiceuMar.