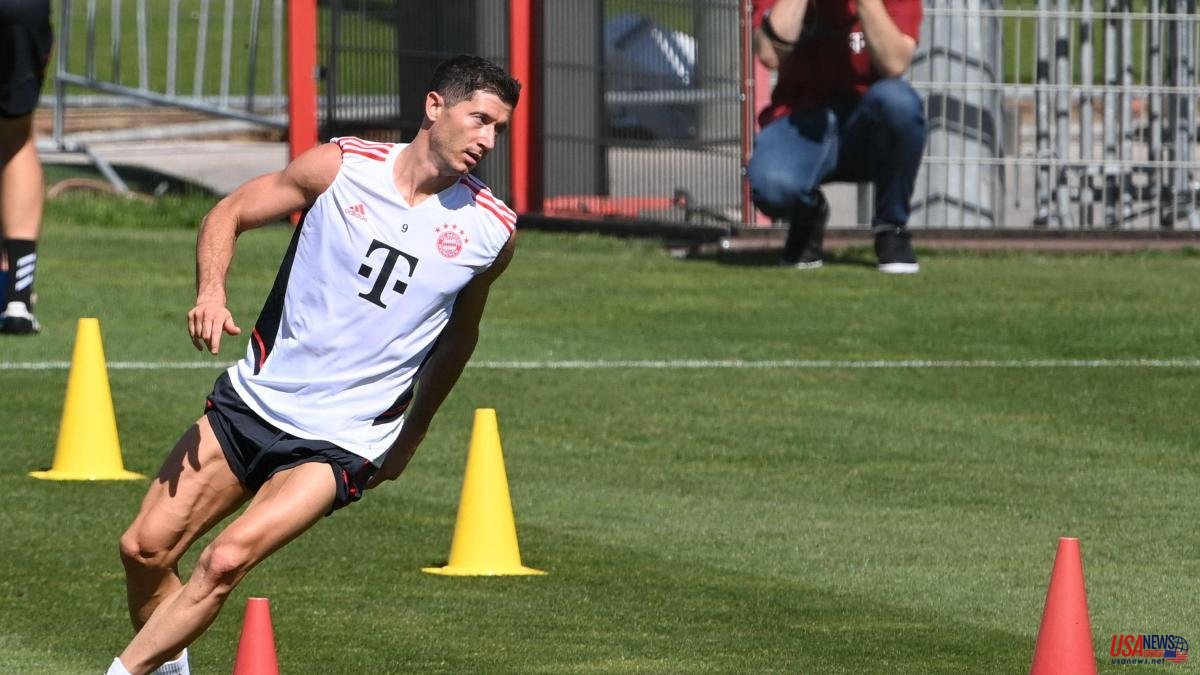 This afternoon (3:00 p.m.), at the Allianz Arena, when the Bayern Munich speaker presents the squad for the new season to the fans, between the announcement of number 8 (Leon Goretzka) and number 10 (Leroy Sané) there will be a difficult gap to fill. Robert Lewandowski's 9 remains an orphan for the time being after the striker has finally achieved his purpose: to sign for Barça.

Knowing the agreement reached late on Friday night, Lewandowski went this Saturday at half past eight to the Bayern sports city to collect his belongings and say goodbye to his teammates. Before that he exercised as one more for the last time with the team. "These eight years were special. I wanted to say goodbye on the field because I want to stay in shape. I wasn't worried about getting injured, these are things that could happen to you even at home," he told the German Sky Sports channel.

Lewandowski will not go through Barcelona to be presented. He took an afternoon flight to Mallorca to meet his wife, Anna Lewandowska, and her two children. Tomorrow he will fly directly to the United States. There she will join the Blaugrana expedition, which travels this afternoon (2:00 p.m.) to Miami. It is expected that it will be there that he passes the medical examination to be able to start training under the orders of Xavi Hernández.

It remains to be seen if there will be some kind of act on US soil with President Laporta to welcome him or if he will wait for his return to the Catalan capital in 15 days to present him in style at the Camp Nou, already with the renovated lawn. His debut could take place in the best possible match: that of the classic on July 24 in Las Vegas (at four in the morning peninsular time).

Barça and Bayern confirmed that the agreement between the clubs is complete. Although Barça's statement does not specify any figures, the Blaugrana will pay the German team 45 million plus five variables for the Pole, one of the best strikers in the world who will turn 34 in August. His contract will run until June 30, 2026.

Bayern has never been characterized as a selling team. His biggest sale so far had been Douglas Costa to Juventus for 40 million. Balanced financially, it is very difficult to get players out of the Bavarian capital who they do not want to part with. That is why the negotiations have been tough and have dragged on for so many weeks. The desire to leave the player, as is usual in these cases, has finally ended up tipping the scales, always with Bayern taking advantage of a player who was free in 2023.

Since the end of last season, Lewandowski had publicly and repeatedly expressed his intention to leave Germany this summer. He considered the victorious cycle with Bayern closed, which has earned him all kinds of individual and collective recognition.

Barça, thirsty for goals, was attentive and quickly made a move to convince the player. It has been more difficult to convince Bayern, entrenched in their position of not letting him out at any price. The initial offer of 32 million was raised until the final 50 that will be paid if the variables are fulfilled.

Since he arrived at Borussia Dortmund in 2010 from Lech Poznan in his country, he has not stopped collecting titles: 10 Bundesligas, 3 German Cups, 6 German Super Cups, a Champions League and a Club World Cup.

At individual level, he won The Best award twice (2020 and 2021) and the Golden Boot as European top scorer on two other occasions. He leaves Bayern with an average of almost one goal per game: 348 goals in 384 games. "We have a verbal agreement with Barça for Lewandowski. Now we need to write the papers," the president of the Board of Directors, former soccer player Oliver Kahn, told the Bild newspaper. "Barca's proposal makes the sale totally sensible on our part," he added.

Chairman Herbert Hainer had kind words for his soon-to-be former player. "Robert is a very deserving footballer, he has won everything with us. We are incredibly grateful to him." When he returns from the United States, Lewandowski will return to the Bayern facilities to say goodbye to all the club's staff.