Perhaps Barça is still like that fifth-grade team that is afraid of facing the advantaged students of the last year. 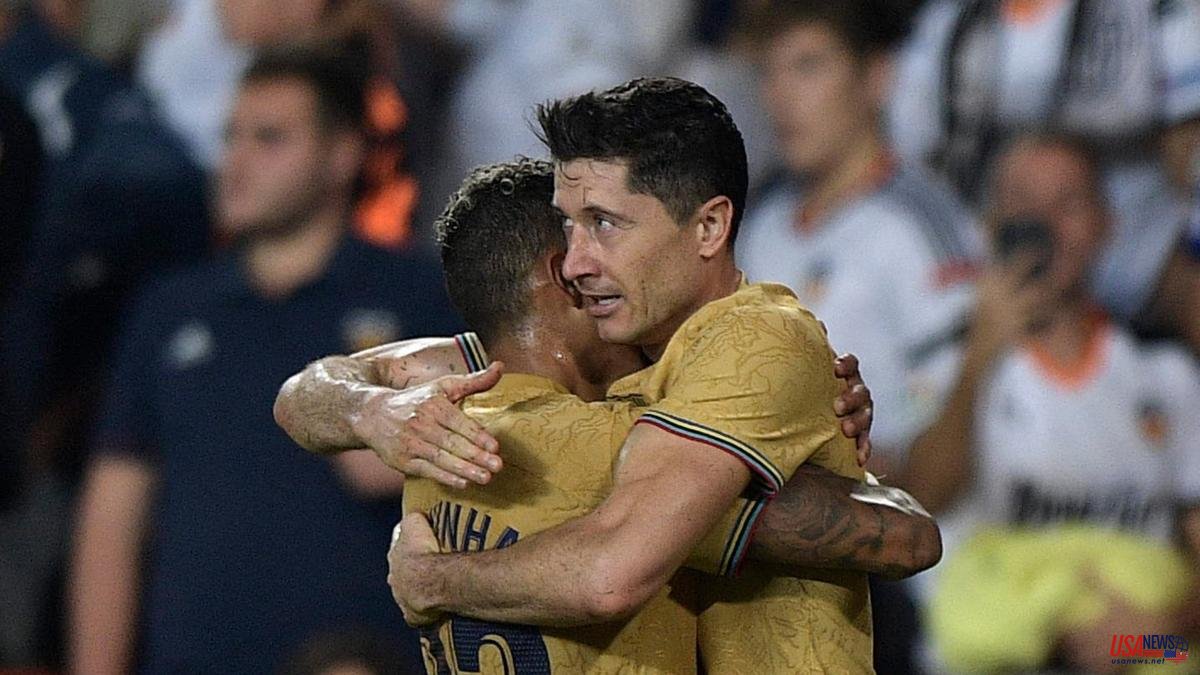 Perhaps Barça is still like that fifth-grade team that is afraid of facing the advantaged students of the last year. Logical. They are teams that, like Bayern, dominate the fears of their rivals like no one else. But although Xavi Hernández's men lack maturity, they do have an undeniable leader. That he has won enough to help Barça take all three points. Although it is in extremis. He is Robert Lewandowski, who against Valencia in the hostile Mestalla stadium saved Barça with a goal in added time. What would this Barça be without the Pole? The reality is that the Blaugrana team is not enough for the Champions League. And he will have to improve a lot, especially in effectiveness, to be able to conquer the League. At the moment, he went to sleep as the leader while waiting for what happens at the Bernabeu between Real Madrid and Girona.

The Blaugrana story will be able to convince more or less. No one is unaware that a team in which a torrent of millions of euros has been invested in transfers after the sale of various club assets, should get over screens more quickly. But once banished from the Champions League, Barça recovered the more realistic argument that the project led by Xavi is still under construction. In Mestalla the argument made sense before the eyes of the defiant Valencian fans. The forecast of the black and white club, due to the surge in ticket sales, was fulfilled and exceeded 45,000 spectators in what is the best ticket of the season. The tribute to David Villa, a former striker who played for both teams, acted as the opening act for the show.

Curiously, Gattuso's Valencia is a team that flees from the harsh and counterattacking style that its fans tend to like more, but it is still the team in the League that commits the most fouls and that ended up exhausted. Asking for the time while he had options. The game began with the feeling that Barça had the upper hand but without achieving the final flash.

Xavi gave up the formula of the four midfielders. He got the two wingers back from him with Ansu Fati, who played alongside the untouchables Lewandowski and Dembélé. The academy player stood out and dribbled but he lacked that magic that previously allowed him to finish off with more forcefulness. Fati was helped first by Pedri, stealing the ball in high pressure down the right flank, and by Frenkie de Jong, who played for the first time on the left for Busquets. Barça's 10th shot ran into Mamardashvili's face. Then, assisted by Lewandowski, he scored offside. With Dembélé gone, Lewandowski also started with a more timid profile than usual. On the only occasion before the goal he had Jordi Alba as an ally. He headed a center from L'Hospitalet but the ball crashed against the post. The right side, without a doubt the most changing place in this Barça, went to Balde. He at first successfully stopped Lino's boarding schools. Then he too faded.

The match was rising in decibels. He arrived at the intermission somewhat accelerated, with Eric Garcia's injury to his left thigh leading to the entry of Marcos Alonso, with Koundé heading in a corner and with a Valencia that had dominance problems in the center of the field. Without the injured Ilaix Moriba, the suspended Yunus Musah and without the greeted Barcelona player Nico Gonzalez, dressed in street clothes and unable to play due to the fear clause, Gattuso assigned the places to Guillamón, Almeida and Foulquier. In front with Lino on the left, he placed Kluivert and Cavani a little more advanced, although the latter barely lasted 15 minutes. He left with discomfort and Marcos André entered. Precisely a hand from the latter disabled Lino's goal in the second half.

Xavi's excel immediately entered the scene with a triple change. Fati, Busquets and Dembélé withdrew. Gavi came out. Also Raphinha and a booed Ferran Torres. Koundé's injury caught Piqué off guard and he had to lace up his boots against the clock. Then Torres missed a chance on goal. And Raphinha with a forced shot but without a goalkeeper, finished off the clouds. The Brazilian fixed the blunder assisting Lewandowski, who with an acrobatic shot saved Barça. There are two days left before the World Cup. You can't lose Barça before the World Championship puts a pause.