It seemed like a game day in the outskirts of the Camp Nou. 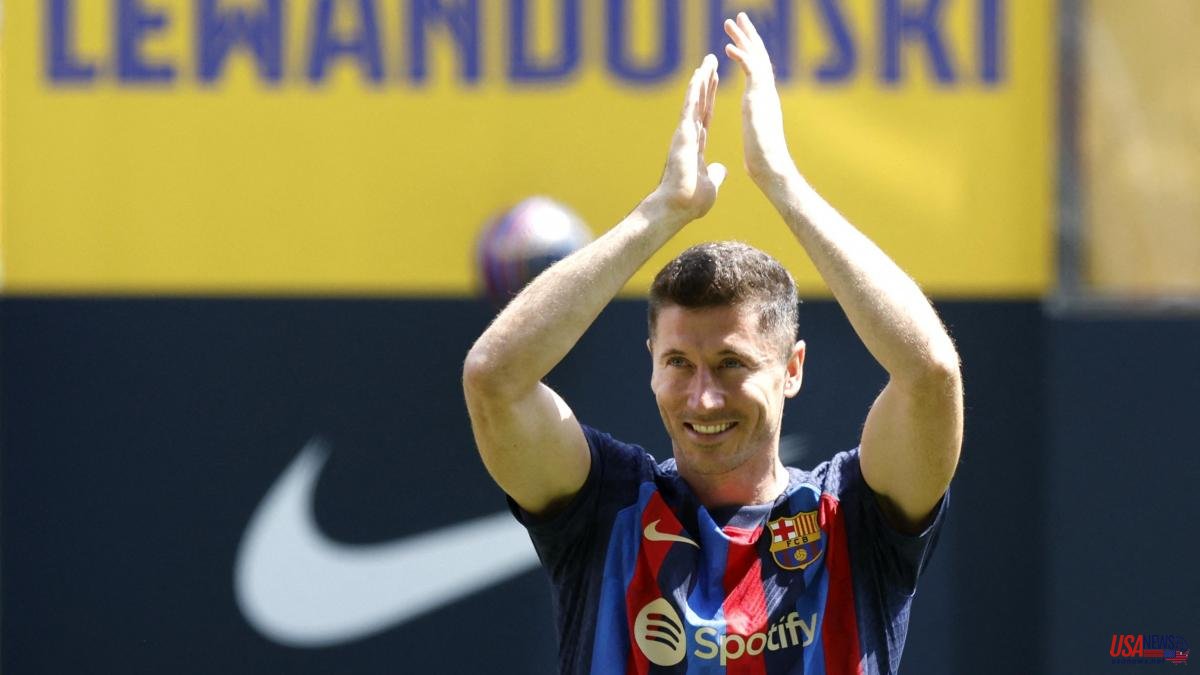 It seemed like a game day in the outskirts of the Camp Nou. If it weren't for the day, a Friday, and for the hour, noon, that's how it could have been. But what has brought together tens of thousands of people in the Barcelona venue has been the coming-out of Polish striker Robert Lewandowski, the most flashy signing that Barcelona has made this summer. The attacker appeared before his new fans dressed in number 9. It was predictable that this was his number, the one worn by center forwards, but it was not known whether the club would give it to him now or wait to see what happens with the future of Memphis Depay, the bearer until now of that number.

But, business is tight and shirts have to be sold, Barça has already given “his” number to Lewandowski, who aroused passions, especially from a child and adolescent audience full of enthusiasm. Due to the dates, logically, tourism was also well present, as it will be this Sunday at the Joan Gamper.

Access was free after issuing a ticket and the club decided to open the second and third tiers of the entire venue, so that the public was not only placed in the grandstand area, but also on the side and at the goals. Barça wanted a massive presentation, in the style of those that Ibrahimovic (60,000 spectators) or Neymar (55,000) starred in their day. From the club it slipped that for this Friday 44,500 tickets had been withdrawn until Thursday but it must also be taken into account that many people arrived at the venue without a seat and got a ticket just before accessing.

Despite a thermal sensation of 37 degrees, the fans had a great time, especially when the footballer appeared on the pitch (the grass is new), whose image was repeated on the video scoreboards under the message “Benvingut (welcome ) Lewandowski”.

Accompanied by president Laporta, and with the Barça anthem playing at full blast, the striker applauded the stands. It is the third time that he stepped on the Camp Nou (the other two times he was as a Bayern player) and the respectable received him loudly chanting his name on several occasions. The Barça leader presented him with his Barcelona membership card while shouts of “Laporta, Laporta” were also heard. The player then put his signature on a canvas from the club's foundation that will be auctioned off for charity.

Then came the parliaments. Laporta welcomed him. “Thank you for the efforts you have made to come to Barça”, the president told the Pole. Laporta also thanked the player's representative, Pini Zahavi, the club's director of football, Mateu Alemany, and the footballer's wife, "one of the keys to the player being so fit".

"Hello culés. Estic molt content to be in Barcelona ”, began Lewandowski in Catalan. Thank you very much. (and already in English). I am very proud and happy to be in Barcelona and in this stadium. I want to score a lot of goals and give a lot of joy. Thanks for your support. I am very happy to see so many people in the stands. This is mind blowing. I hope that in the end we can win the titles.” "I'm sure a lot of people will come to cheer us on Sunday (at the Gamper)".

The stands also vibrated with the traditional ball touches of a signing. The Pole was not nervous, cheered by the public. The footballer finished a small round with undergraduates from the Barça Academy.