Leslie Howard, the English spy who died for carrying a message from Churchill to Franco

He was one of the brightest actors of his generation. 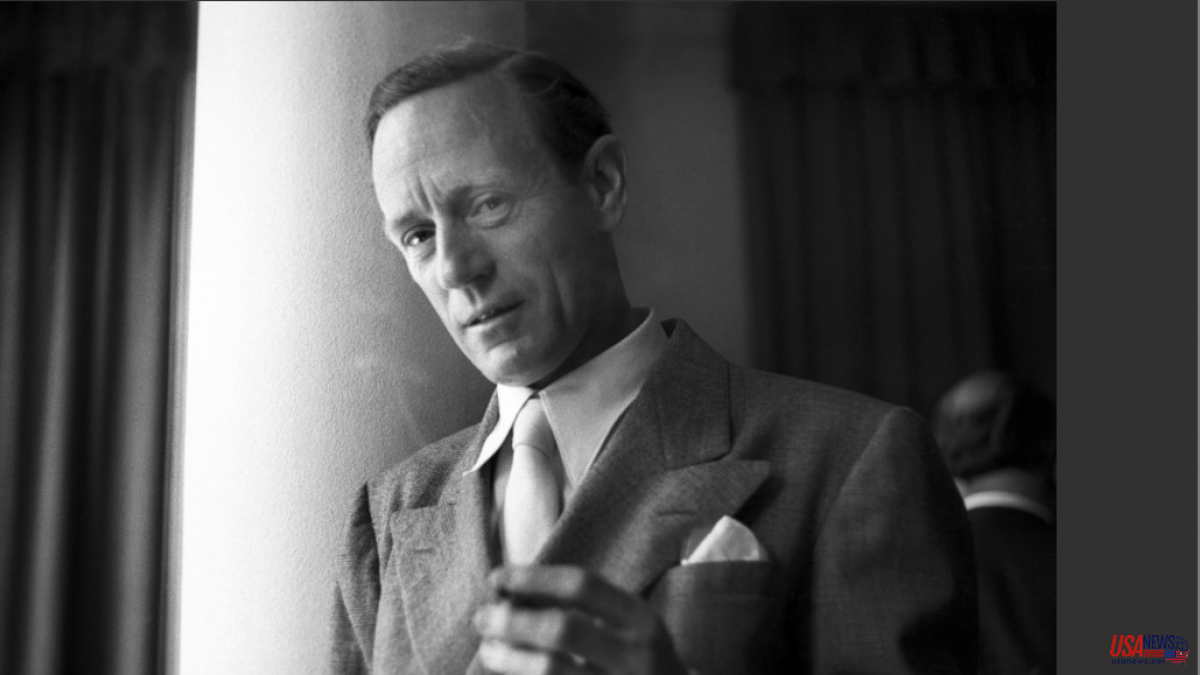 He was one of the brightest actors of his generation. Leslie Howard never lost his English phlegm which helped him land some of the best roles in golden Hollywood of the 1930s. The quintessential British gentleman played Professor Higgins, the Scarlet Pimpernel, Romeo or Ashley Wilkes, the platonic love of Scarlett O'Hara. But his career was cut short in 1943. Howard became a spy during World War II and was assassinated by the Nazis for having carried a message from Churchill to Franco.

Howard (1893-1943) participated in the First World War and was greatly weakened in the war. The doctors recommended that she take theater classes. He was talented so he soon jumped into British cinema. From there he went to Broadway and it didn't take him long to get to Hollywood where he immediately found a niche. He debuted as the protagonist of Outward Bound (Robert Milton, Ray Enright, 1930) playing one of the passengers on a strange cruise to the afterlife.

He shared the poster with the Spanish Conchita Montenegro in a romantic comedy, Forbidden (W.S. Van Dyke, 1931) set in the exotic islands of Polynesia and participated in The Eternal Flame (Sidney Franklin, 1932) along with two of the great stars of the time. , Norma Shearer and Fredric March. She later was torn between the love of Ann Harding and Myrna Loy in The Animal Kingdom (Edward H. Griffith, 1932).

He got an Oscar nomination with his next work, Berkeley Square (Frank Lloyd, 1933), based on the play by John L. Balderston, where he gave life to a scientist who suddenly travels to the 18th century and amazes his fellow citizens. with his alleged divinatory skills. Howard, who combined his work between Los Angeles and London, triumphed with a British production The Scarlet Pimpernel (Harold Young, 1934), based on the novel by Baroness Emma Orczy, where he was an English aristocratic fop who, behind his frivolity, hid a hero who saved noblemen from the guillotine during the French Revolution.

Back in Hollywood, he placed himself under the orders of Michael Curtiz to become a spy who falls in love with a Bolshevik (Kay Francis) during a mission in the USSR in The British Agent (1934). That same year he landed one of his most celebrated roles, that of Philip Carey, in Captive of Desire (John Cromwell, 1934), an adaptation of W. Somerset Maugham's novel Human Servitude. Philip, a young medical student, lives tormented by his limp. He falls in love with a waitress, Mildred (Bette Davis), who subjects him to continuous humiliation, but he is unable to break this destructive relationship.

Things were worse on his next project. The great producer of the Metro Irving Thalberg wanted to bring Shakespeare's Romeo and Juliet to the cinema with his wife, the famous actress Norma Shearer as Juliet. The project came to fruition in 1936 at the hands of George Cukor and Howard was chosen for the role of Romeo. But the film did not work perhaps because of the advanced age of the protagonists. Norma was 36 years old and Leslie, 43. Too much to make Verona's teenage lovebirds believable.

But Howard had made a good tandem with Davis and the studies did not ignore him. They were paired again in The Petrified Forest (Archie Mayo, 1936) where they were kidnapped by a gangster, Humphrey Bogart -Howard's close friend in real life- in one of his first major roles. And in 1937, Olivia de Havilland joined the Davis-Howard duo in It Is Love I Seek (Archie Mayo), a wacky love-triangle comedy.

After the nice Always Eve (Tay Garnett, 1937), where he shared the poster with Joan Blondell and Humphrey Bogart, Howard returned to England to start directing in style with an adaptation of George Bernard Shaw's work Pygmalion. Wendy Hiller played Eliza Doolittle and Howard was, of course, the perfect Professor Higgins trying to teach the Covent Garden florist how to speak properly. The movie was a success. It achieved four Oscar nominations and brought the actor the award for best male performance at the Venice Film Festival.

Howard was also the perfect Ashley Wilkes, the gentleman from the South for whom Scarlett O´Hara (‎Vivien Leigh‎) dies, but who marries the sweet Melania (Olivia de Havilland). The actor did not want the part because he found the character too soft, but the producer, David O. Selznick, convinced him with the promise that he would allow him to work in Intermezzo with Ingrid Bergman. Thanks to that promise, Howard was cast in Gone with the Wind (Victor Fleming. 1939), the great film of the 1930s and one of the best productions in film history.

At the outbreak of World War II, the actor returned to the United Kingdom to put his camera to the service of the British cause. He directed and starred in three propaganda titles, although they are quality films: Pimpernel Smith (1941), The Great Mitchell (1942) and The Weaker Sex (1943). In parallel, he became a spy and that would be the cause of his death. On June 1, 1943, the plane in which he was traveling from Lisbon to Bristol was shot down by the Nazis over the Galician coast. There were no survivors.

It was always thought that the Germans believed that Winston Churchill was traveling on that plane, but a few years ago the investigator José Rey Ximena revealed that the real target of the Nazis was Leslie Howard. The actor had supposedly traveled to Spain to give a conference, but in reality he was carrying a message from Churchill to Franco asking him not to let Spain enter the war. Howard held a secret meeting with the dictator with whom he contacted thanks to Conchita Montenegro, his partner in Forbidden and his former lover, who had entered Franco's circle through her fiancé, Falangist Ricardo Giménez Arnau. .

All 13 passengers and four crew members on that plane died. Howard's body was never found. The actor was 50 years old and his career was still very promising. He left behind a wife, Ruth Evelyn Martin, whom he had married in 1916, and two children, Ronald and Leslie.